A tale of two bats: One lives, one dies

From November to March, bats put out their “Do Not Disturb” sign while they hibernate.

It’s not as simple as falling asleep and waking up in six months. Bats go into torpor, which is a physiological state, unlike sleeping, where almost everything is shut down. Bats live off their body fat during that time.

Some species of bats develop white nose syndrome. It sounds cute, but it is decimating the bat population. More than a million bats have died each year since it was introduced in the United States in 2006.

White nose syndrome isn’t directly lethal. Tomasi compares it to when people get a rash. However, the bats die during or shortly after hibernation from this fungal infection. This is because it causes them to use too many calories in the winter. 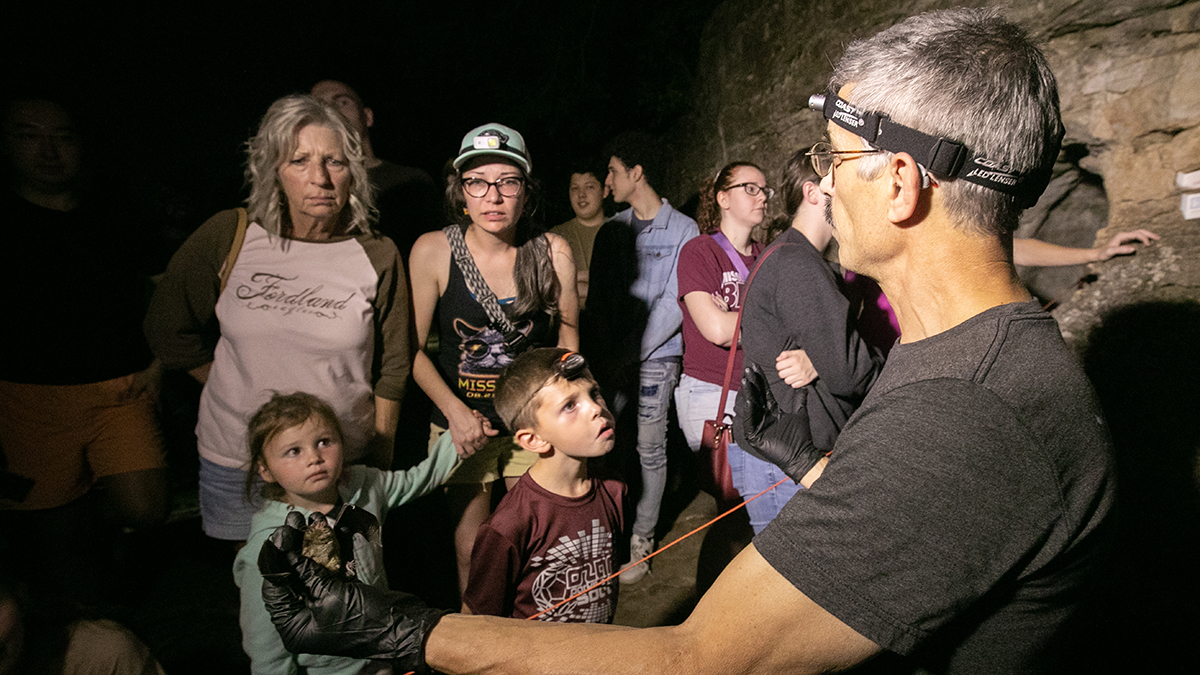 Many bats reside in a cave at Sequiota Park. Dr. Tom Tomasi participates in an event there in fall 2019 and uses it as an opportunity to educate the community on white nose syndrome and bats.

Bats can’t be in torpor all of hibernation. Every so often, a bat arouses out of torpor. The heartbeat speeds up. The body temperature rises. The bat may find a better spot in the cave.

“Bat females generally produce one pup a year. If that pup survives, it’s going to take a long time to get back up where it needs to be.”

Some bat species that get white nose syndrome, like the tricolored bat and northern long-eared bats, arouse more often than healthy bats. The more they come out of torpor, the more body fat they burn. The bats that arouse more often run out of fuel and die.

Other species of bats, like grey bats and big brown bats, seem to ignore the infection and arouse at the normal rate. They fight off white nose syndrome in the spring when they end hibernation. 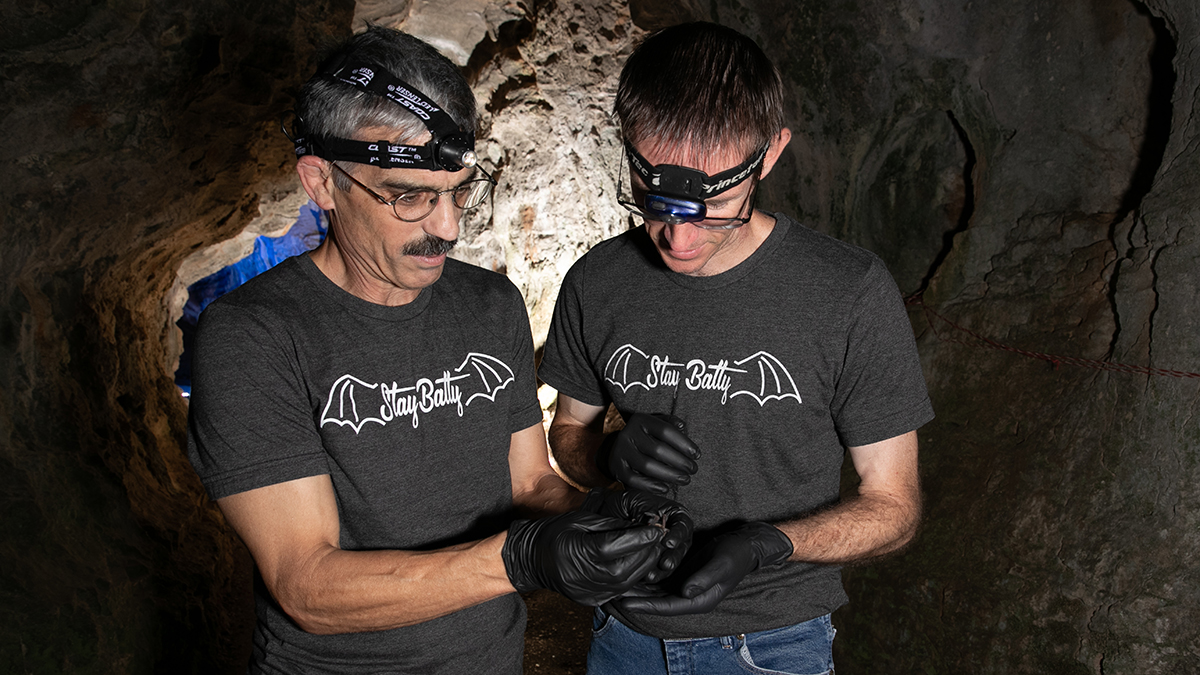 Down to the genes

Why are some bats triumphing over white nose syndrome and others are dying at alarming rates?

Tomasi brought in Dr. Chris Lupfer, assistant professor of biology, to look at the immune system.

“We’ve been looking at whether or not the immune system will explain why some species are 75-95% gone,” Tomasi said. “Other species, their numbers don’t change.”

Together with students who work in their research lab, they found six immune-function genes that are expressed more in species affected by white nose syndrome. 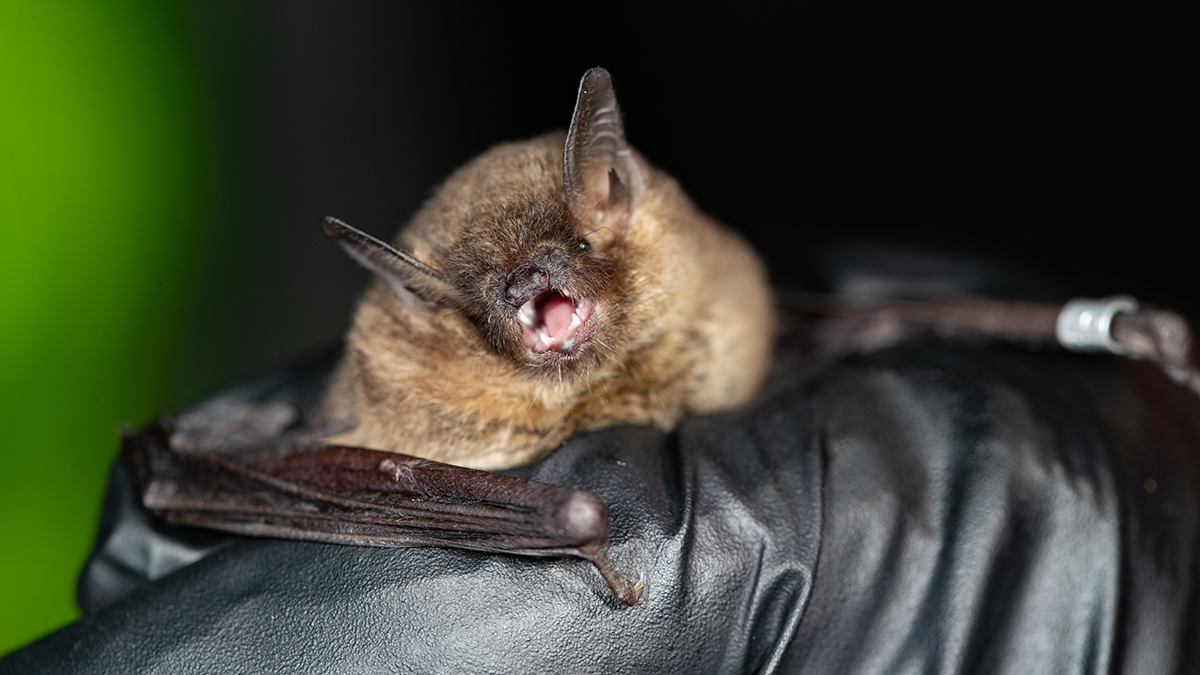 Bats, like this one, are susceptible to white nose syndrome. Drs. Tom Tomasi and Christopher Lupfer are identifying the genes that allow some to survive.

The bats who are dying turn on those genes before or during torpor. The bat species who are surviving wait until spring to turn on the genes to fight the syndrome.

“The immune system of the susceptible species tries to turn on and protect the animal, which doesn’t work,” Tomasi said.

“And the bats that seem to say, ‘all right, it’s grown on me, but my immune system is not going to turn on and try to defend myself until spring’ are the ones that survive.”

“Bats are cool,” Lupfer exclaims. “It’s been exciting to work with bats and get out of the research lab and into the fields and caves.”

Lupfer has partnered with Tomasi for the past three years. With more than 30 grants and 35 publications, Lupfer wryly observes that Tomasi has groupies. 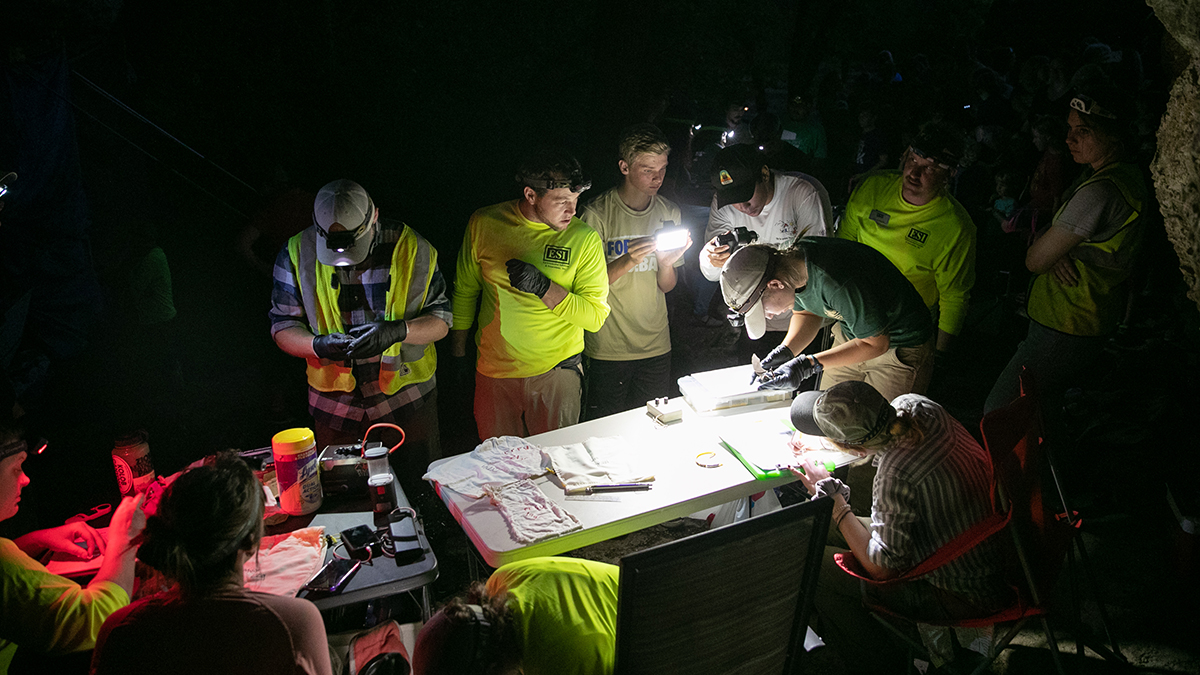 Volunteers work alongside the team from Environmental Solutions and Innovations to record data on the bats living in Sequiota Park.

What it means for the Ozarks

“We used to have 500-600 bats in a cave I looked at with the Missouri Department of Conservation,” Tomasi said. “When we were there a couple years ago, we found 45.”

Tomasi and Lupfer have traveled to Oklahoma, Utah, Arizona and other states to find and protect bats.

“So that same bat that survived the wintertime and repaired the wing damage, got rid of the fungus during the summer, the next winter when it’s going to hibernate, it could get it again.”

Lupfer adds that this research can prevent other areas from being as harmed by white nose syndrome.

“In the western United States, white nose is just starting to pop up,” Lupfer said. “If we can use our research to predict which bats are more likely to die, then wildlife managers can take steps to protect those bats now.”