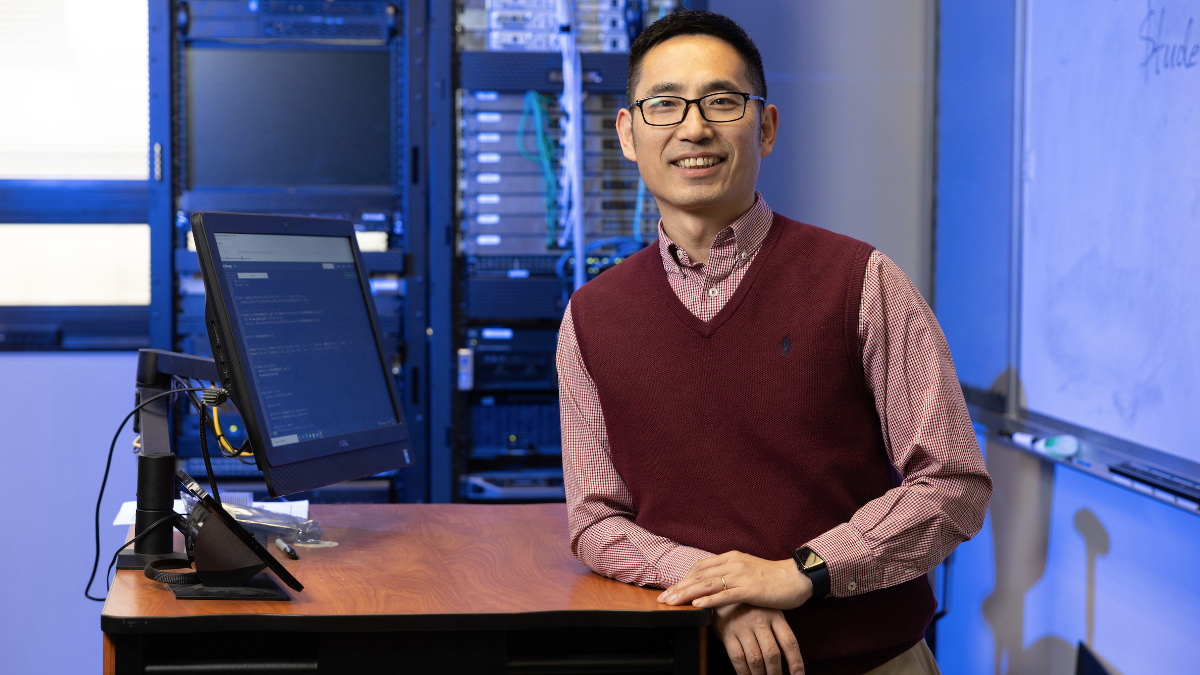 For Dr. Lawrence Yang, an associate professor of information technology and cybersecurtiy at Missouri State University, they go together smoothly.

He explains that artificial intelligence and machine learning can predict human purchasing behavior. One example he uses is how the amount of frosting purchased will drop in conjunction with the spike in cake prices.

“I am interested in applying artificial intelligence to help solve business problems and better predict possible outcomes,” Yang said. It’s an interest that he began to focus on while pursuing his PhD.

“I believe AI has the ability to affect organizations’ decision-making skills in a positive and efficient way.”

“Human beings are intelligent and can learn lots of information, but humans only have a certain number of years to learn that information. That’s our limitation,” Yang said. “Artificial intelligence has no limitations. We can insert millions of good and bad examples in these software programs in the matter of a couple of minutes.”

After that, the machine can predict the best course of action, Yang added. 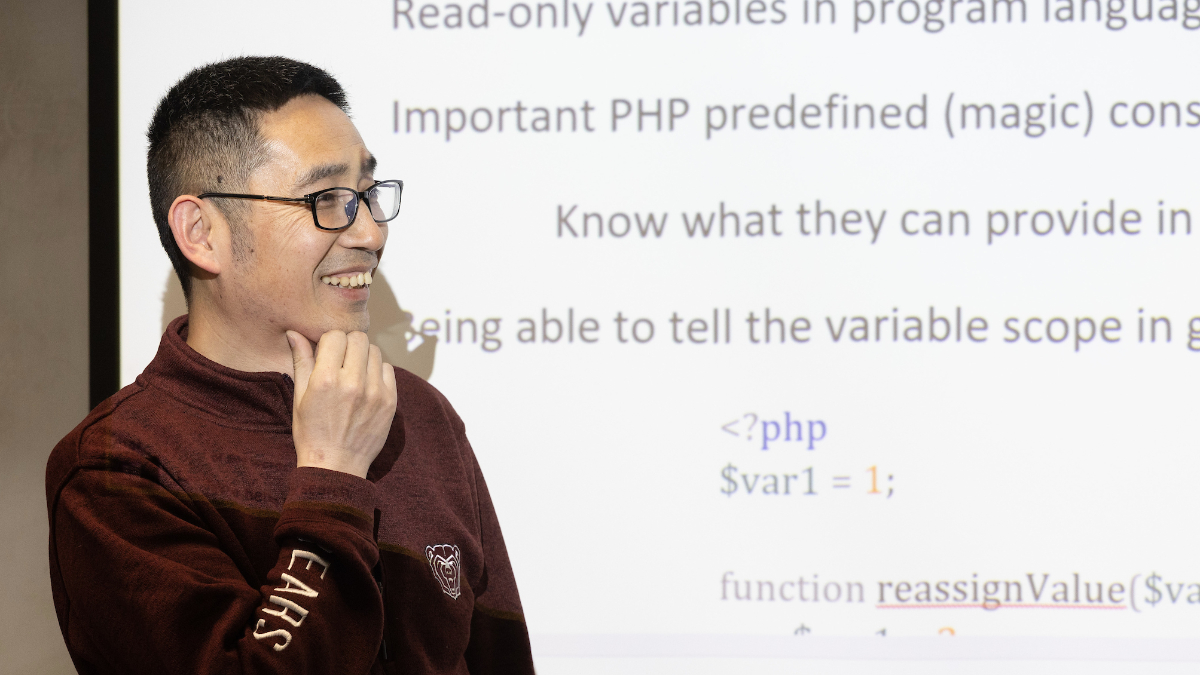 The answer to the question

Dr. D. Sudharshan, Yang’s advisor and mentor, had a vision about how AI would shape the future. This inspired Yang, setting him on his current research path exploring the use of AI in business decisions.

Over the past six years, Yang has authored and co-authored six publications of research. All his research is centered around how businesses can better use technology to become more efficient.

For his most recent project, Yang focused on a typical business problem called cross purchases. These are products used together – like cake mix and frosting.

“First of all, we already know if you drop the price of anything, consumers are going to buy more of it. That’s a typical economic problem,” Yang said.

When the cake mix price dropped, Yang wondered if consumers would also buy more frosting when they filled their baskets.

But he’s not actually talking about people in a grocery store or sweet confections. Yang uses AI to learn the extent consumers make these cross purchases when one product’s price decreases.

Yang is not the first researcher to focus on cross purchases in businesses. People have been researching it for years using economic models such as regressions and other statistical models.

But these statistical models are flawed, Yang noted.

“When you add too many dependent variables into these models, it is hard for the computer to give good reliable data,” Yang said. “This is a good place to think about using artificial intelligence and machine learning algorithms.”

According to Yang, machine learning can calculate solutions with multiple variables without sacrificing reliability. 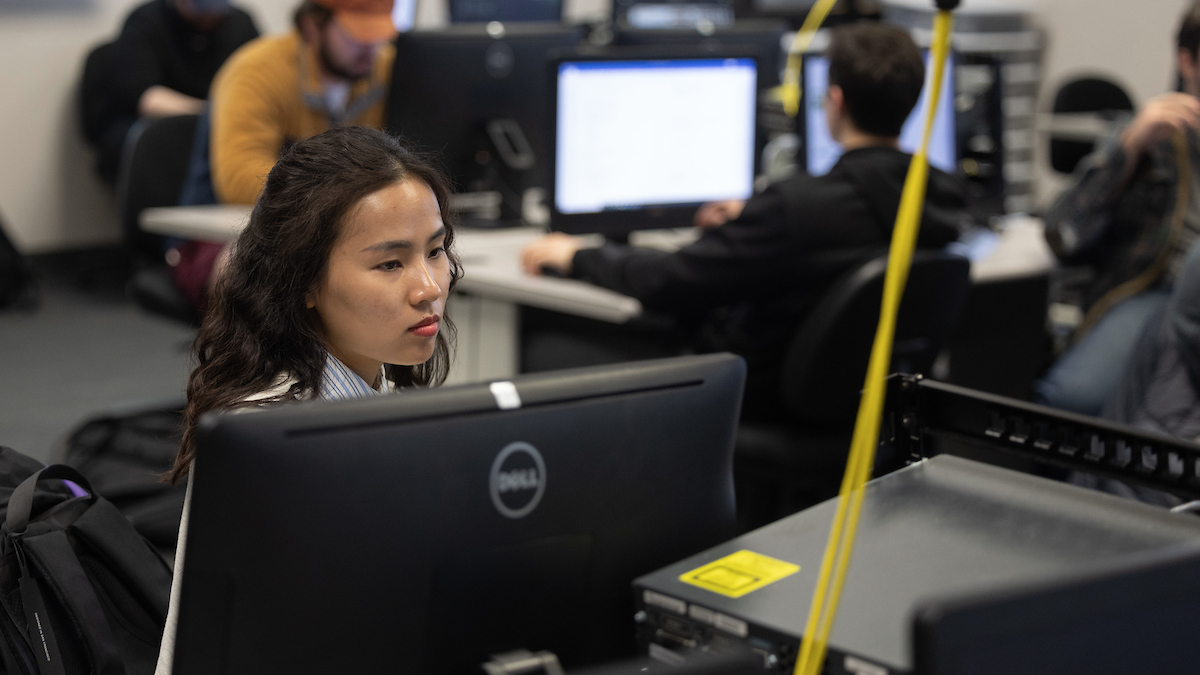 Student Linh Nguyen works on a problem in a computer lab.

Time is of the essence

To start his research, Yang obtained data sets from a public database, Nielsen Consumer Panel. Yang obtained raw data that had about 20,000 purchases in that data set.

With this data, he ran comparison tests between traditional models and AI. From it, he discovered something important.

When looking at four variables – like cake mix, frosting, detergent and softener – the traditional econometrics model could perform similarly to AI. In fact, it made the same purchasing decisions.

However, adding four more variables overwhelmed the econometrics model. It took two weeks to evaluate the relationship between those eight variables.

Using those same eight variables, AI and machine learning performed the analysis in only two hours.

“My dream project is artificial consciousness. Someday I can build a AI, so let AI have feelings, let AI able to protect itself, define itself, let AI know what’s the boundary between the AI itself and other counterpart. I mean, that’s my dream project.”

This was a significant learning experience for Yang. It showed just how powerful AI is in terms of bearing the load of big data.

“With this, businesses can use the data in real time and better make business decisions,” Yang said.

Yang is hoping to continue his research in artificial intelligence and learn more about how he can embed knowledge into AI.

“Dr. Yang is a very talented researcher who tackles contemporary problems using a wide range of research skillsets,” said Dr. Joshua Davis department head information technology and cybersecurity. “I am very impressed with the quality and diversity reflected in his research portfolio and am excited to watch it continue to grow.”

Yang plans to push forward his research into the realm of artificial consciousness. This refers to a non-biological, human created machine that is aware of its own existence.

Learn about the ITC program