Making a statement through the creative process

Do you consider yourself to be creative? If you said no, you may want to reconsider, Dr. John Prescott said.

“I think everybody is creative to some degree, whether they’re creating artistic products or finding new ways to be an accountant or a building contractor,” said Prescott, professor of music at Missouri State University.

“Creativity is part of the human persona,” he said. “People will say, ‘Well, I’m not creative.’ They just aren’t realizing that creativity lies in a lot of directions, not just the arts.”

Prescott’s creativity led him to become a composer whose library of titles includes about 200 works. He’s also enthusiastic about world music – specifically Chinese – and has spent much time teaching students about the rudiments of playing traditional instruments.

His commitment to helping students stands out, as he also utilizes creativity when it comes to advising students. He spent a decade as music department head at Missouri State and discovered he had the opportunity to invent creative solutions to guide students toward the finish line of graduation.

Prescott has demonstrated his commitment to assist Missouri State students in general, said Samantha Sack, a senior composition student who has worked with Prescott for about three years.

“Dr. Prescott is very helpful in helping students focus, reach goals and get material to work with,” she said. “It isn’t just in composition, though. He’s very supportive of students in other areas too. He has a general passion for helping students succeed.” 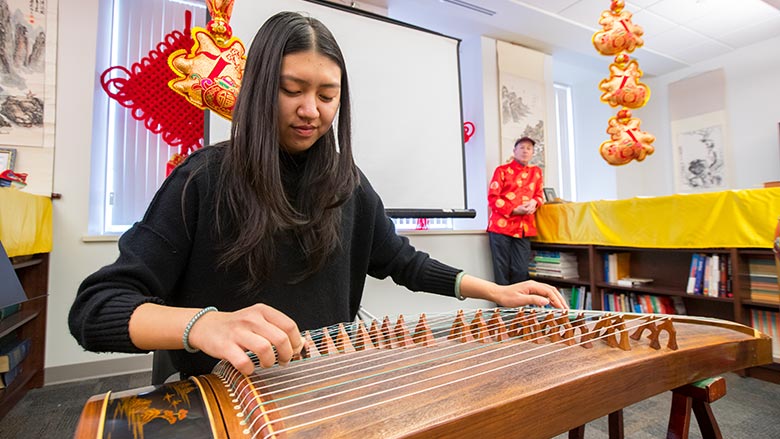 Writing music can be a fulfilling and humbling process, Prescott said. One key is achieving a level of equilibrium.

“Some of the pieces I’ve spent a lot of time working on have not sold well at all,” he said. “But there’s a piece in my catalog called ‘Aliens Landing (In Your Back Yard!)’ that took me about two hours to write on an airplane, and it has sold a lot of copies and been very successful for the publisher.

“It’s writing pieces like that that allow me to also publish the more serious things that I’ve spent more time at, so I have to balance those things. The commercial and the artistic have to get balanced and sometimes things lean more one way or the other.”

One of Prescott’s most recent compositions is a rearrangement of the four notes in “Taps.” Four students – Jacob Batey, Darrell Burton, Gabriel Duerkop and Elisa Wren – performed the piece, titled “Quadrivium,” for the first time on the 15th anniversary of the Sept. 11 attacks.

“Everybody who’s an artist wants to feel fulfilled like their art matters. That what they’re saying is important to somebody else.” — Dr. John Prescott

Months before the student performance, Prescott demonstrated the piece on piano in his office. “Quadrivium” places simultaneous notes in different keys, which creates a discordant sound that reflects the terror of 9/11.

“Now it’s not quite so pretty, right?” Prescott said. “There’s a bit of bite to it.”

Still, there’s beauty in uncertainty and dissonance, Sack said.
“He’s a great composer. That piece is beautiful and touching,” she said.

The choreography of the piece placed Prescott’s students at four locations in Missouri State’s Historic Quadrangle in the heart of campus. As they played, the students slowly converged at the cornerstone in the center. The piece reached its climax when all four players reached the cornerstone and played in a meaningful pattern: nine notes, then 11 notes.

The group played in four different keys at the same time.

Discover the department of music