Dr. Jorge Rebaza sees so much beauty in mathematics, it’s only natural that he finds ways to connect math to almost everything else.

Rebaza, professor of mathematics, teaches numerical analysis and applied mathematics at Missouri State. His recent research interests range from showing how your brain processes language to exploring a way to predict the spread of waterborne diseases.

“The work we’re doing is important” 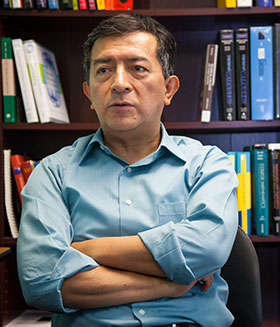 “Mathematicians can get lost in the beauty of pure mathematics…” — Dr. Jorge Rebaza-Vasquez

“Mathematicians can get lost in the beauty of pure mathematics — many of us do not properly explain why the work we’re doing in pure or applied mathematics is important to society.”

He uses applied mathematics to collaborate with faculty colleagues both on- and off-campus, and often has students involved.

“We believe students don’t have to be in their master’s or PhD studies to do high-level research.”

Math is at the heart of research projects

So you have a research project, and have gathered some quantitative data — which is any information that can be measured with numbers. What do you need next? Mathematical modeling, Rebaza said.

“If you don’t have some of the tools needed to help you solve the given problem, mathematicians can create those. This is at the core of mathematics.” — Dr. Rebaza

These models help researchers interpret quantitative data. This allows them to next predict, and then verify, actions or results. And he is excited to share in such varied studies across so many disciplines.

What role does math play in the public health field? Rebaza shared that he is collaborating on a project mapping the spread of waterborne diseases, such as cholera and E. coli. Using multiple variables and parameters — such as the size of populations, the distance between those populations and the volume of water in the river that flows between those groups — Rebaza and some students developed and analyzed a mathematical model to predict how diseases will spread. It’s a complicated problem: They may need as many as 60 equations to determine the pattern of an outbreak.

Dr. Erin Buchanan, associate professor of psychology at Missouri State, collected data showing that the brain reacted at different speeds to words that were related versus words that were not.

“I wondered about some cool, interesting ways to analyze this data,” Buchanan said. “I contacted the math department, and he was interested in using the numbers in a class.”

Rebaza and his students came up with a curve model to more precisely measure how much faster or slower the brain reacts. “We wrote a short program to come up with the answers they wanted,” he said.

Across the world, a geology professor in Germany wanted methods to accurately approximate the gravitational potential energy of the Earth. Rebaza was happy to help, even as he was working on a project to develop algorithms to more precisely and more rapidly predict how a search engine will rank various websites. Meanwhile, he also agreed to a photography-related project that uses cosines to determine how much an image can be compressed before the human eye starts to detect oddities in color frequencies.

Rebaza doesn’t just work with Missouri State students. For six years, he and other MSU math professors have been involved with a National Science Foundation sponsored program called Research Experiences for Undergraduates in Mathematics.

Each summer, nine students from universities across the country come to Missouri State for eight weeks to work on cutting-edge research.

“These are the best-of-the-best undergrads.” — Dr. Rebaza

Becoming a host school for this program is competitive; only about 50 schools in the nation have hosted. In some cases, the undergraduates who participate at Missouri State transfer to MSU, or come here for graduate studies.

Rebaza, who grew up in Peru, earned a master’s degree in Germany and a PhD from Georgia Tech. He has been working at MSU since 2002, and is happy to mentor students from all around the nation.

“This grant has been a wonderful gift for our department and MSU — now we’re on the same page with many other big mathematics schools.”