The Ozarks are known for natural beauty and clean streams ideal for outdoor adventures like fishing, camping and canoeing. Madeline Pletta, 2013 alumna of the biology graduate program at Missouri State, found the Ozarks is also a wonderful place to intensely study freshwater mussels with great faculty mentors such as Dr. Chris Barnhart.

“Dr. Barnhart can be considered the godfather of mussel-rearing,” Pletta said.

Pletta worked for a year and a half in Minnesota on a field-survey team studying mussels in the Mississippi River, then graduate school beckoned. The opportunity to work with someone like Barnhart drew her to Missouri State. 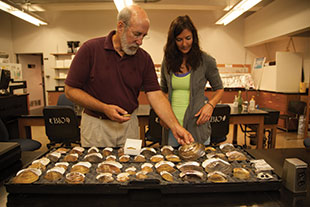 The Missouri State lab is a captive-propagation facility, which means mussels live there and are bred in a controlled environment.

Pletta gained hands-on lab experience and led research projects on a variety of mussels, including the federally endangered pink mucket and invasive species such as the zebra mussel.

Freshwater mussels start life as larvae: tiny, temporary parasites that live on the gills of fish. These are captured in the lab on fine screens after they drop off the fish. Several hundred nearly microscopic juvenile mussels can be obtained per fish.

These juveniles grow to the size of several centimeters in the MSU facility. Barnhart also has a mussel-culture facility at the Kansas City Zoo, and the animals grow to a larger size there. These mussels are used for toxicology research, as well as restoration of endangered species.

“Mussels from the size of a pinhead to the size of your fist are raised at Missouri State and at the Kansas City Zoo,” Pletta said.

Barnhart’s lab was approached by Marrone Bio Innovations, a green pesticide company, to test the effect of its new molluscicide (a pesticide that kills mollusks) on native mussels. The molluscicide, Zequanox, is used to control the zebra mussel, a non-native species that is a pest in many parts of the world. This project became part of Pletta’s thesis research, so she could ensure Zequanox does not harm native mussel species.

Mussels benefit the ecosystem because they filter water as they feed. However, the invasive zebra mussel is hazardous since it can adhere to anything. One example Pletta noted was the ability of zebra mussels to clog pipes carrying cooling water in power plants. 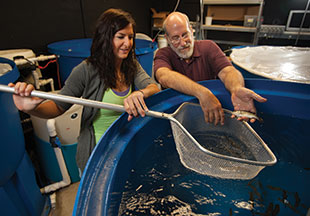 Madeline Pletta and Dr. Chris Barnhart look at largemouth bass kept in tanks in MSU’s Temple Hall. Barnhart and his students inoculate these fish with mussel larvae, since mussels initially develop as parasites on fish gills. The larvae eventually fall off and are raised at Missouri State and the Kansas City Zoo.

The first stage of her research involved testing toxicity of Zequanox on four species of native mussels, including the endangered pink mucket. The tests showed Zequanox has very little effect on the native species, indicating it is a promising product. Then she expanded her research to include seven species, researching their ability to capture different sizes of food particles.

Using a highly sensitive particle counter, Pletta released polystyrene microbeads along with food into tanks of mollusks and tested the water at specific increments. As she watched, waited and tested, she found some surprising results.

Ultimately, her findings will be instrumental in determining the appropriate particle size and concentration for Zequanox, as well as allowing Marrone Bio Innovations to get Environmental Protection Agency approval for open-water use of their product.