Trouble bubbles beneath the surface. Hot magma, about 2,000 degrees Fahrenheit, prepares to burst forth from the crater as lava.

It may erupt suddenly and violently terrorizing the town nearby, setting forth panic and destruction.

It might slowly ooze. And another volcano might lay dormant for several more years – centuries even. It’s nearly impossible to predict.

That is one of the goals of Dr. Gary Michelfelder’s research.

For the last 15 years, Michelfelder, associate professor of geology at Missouri State University, has studied the Rio Grande Rift and the Andes Mountains in Chile. He studies magma, volcanoes and the Earth’s crust to learn more about how and why volcanoes erupt to improve forecasting.

He’s also fascinated by the landscape and what ripple effects these eruptions cause. 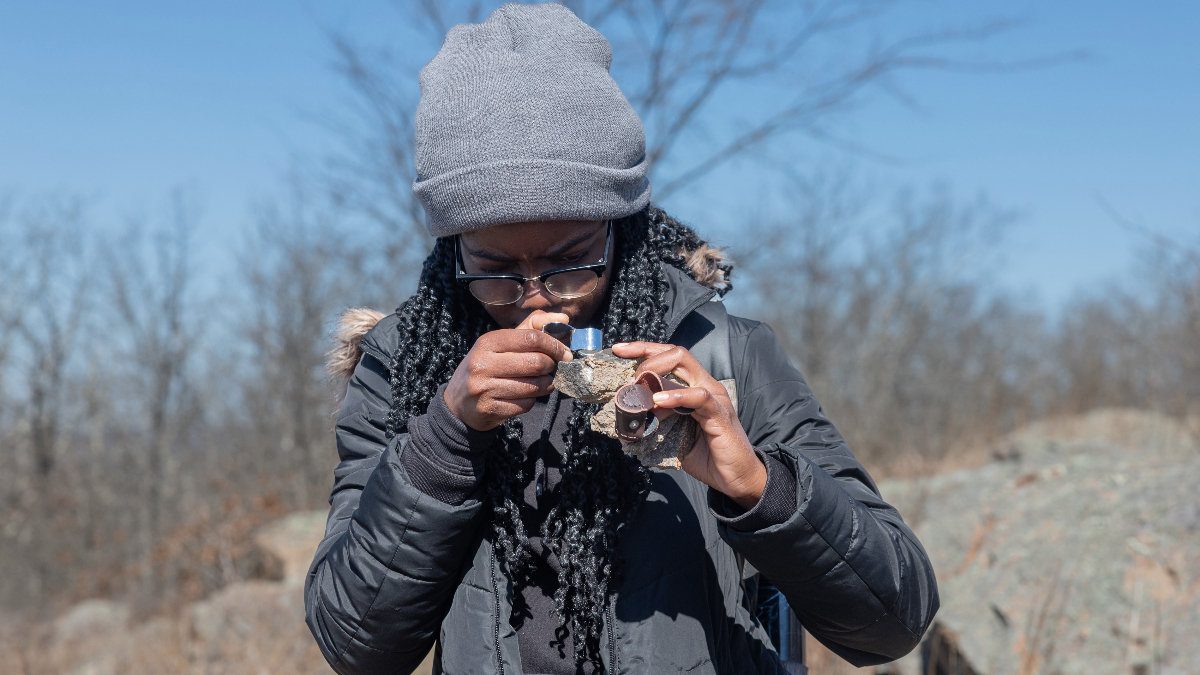 Student Oluchi Nweke examines a rock with a hand lens during a field trip to the St. Francois mountains in southeastern Missouri.

What do the rocks tell us?

While you may never see lava firsthand, it changes the atmosphere and our world.

As lava cools, it becomes igneous rock, which preserves the history of the eruptions.

“I mainly look at volcanic systems as snapshots in time to record the continental crust,” Michelfelder said.

These magmatic systems – each unique in physical stature and behavior – damage and disrupt more than the terrain.

“I was lucky enough to get to go to a conference in Japan that just happened to coincide with the volcano erupting.“

According to Michelfelder, the gases emitted can change climates or reduce agricultural yields.

“These studies give us insight into understanding our planet,” he said. “We can see why life is here compared to maybe life on another planet, or maybe lack of life in another climate.” 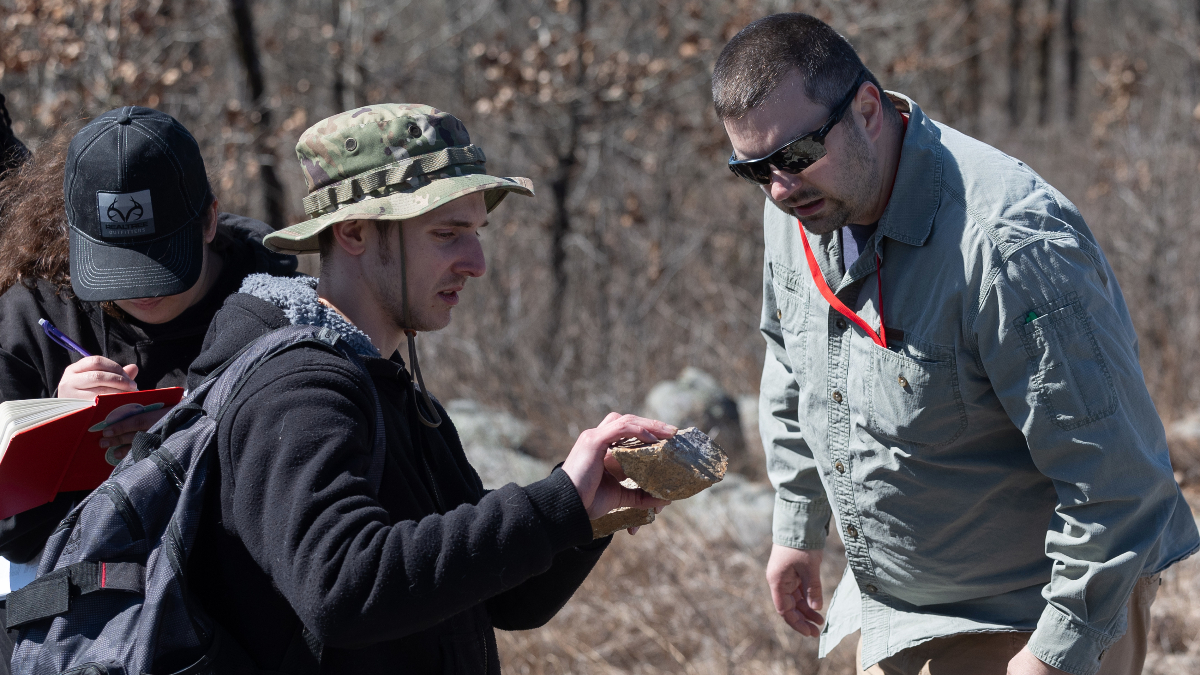 Being outdoors is the best way to learn about the phenomena Dr. Gary Michelfelder studies. Here, student Carl York consults Michelfelder about a finding.

Struck by the geology bug

From a kid who participated in geography quiz bowls, to a young Army soldier stationed in New Mexico, Michelfelder has always wondered why.

“Why are we sitting in this big flat, open area? How is there a 10,000-foot mountain just a mile away?” he said. “It pushed me to understand the landscape around me.”

As his career in the National Guard and in academia grew, so did his ability to satisfy his curiosity. He has produced more than 20 publications in the last decade.

His current quest is to unveil the mysteries of magma. The National Science Foundation awarded more than $230,000 in funding for this latest research endeavor. 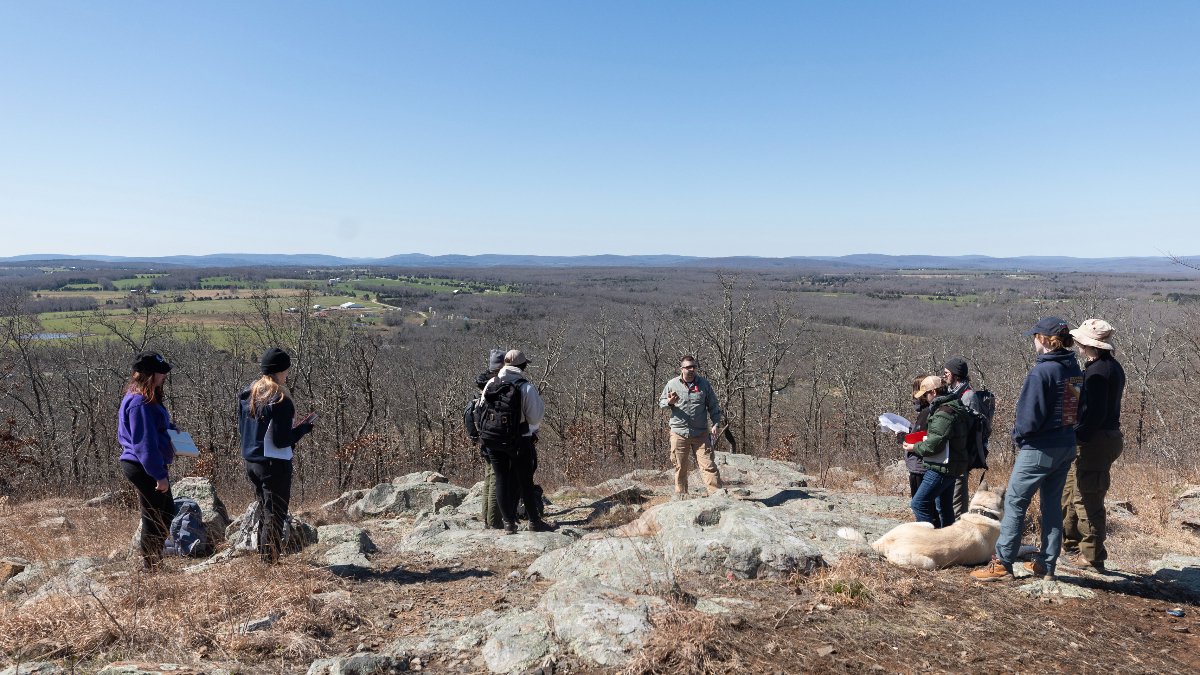 For scope, the Central Andes has at least 15 volcanoes the size of Yellowstone National Park. He is looking at an arc of volcanoes that reside atop a regional magma body. It is a reservoir roughly the size of Missouri.

Michelfelder and his research team, which includes graduate students and collaborators across the globe, are trying to understand if this magma body feeds all the volcanoes. They also want to know:

“We want to understand the volcanoes in the Andes today versus one million, two million or three million years ago,” he said. “We’re recording the temperature, the pressure and composition of the magma. Then we ask, ‘is it staying the same for each volcano? Is it changing within a stage of a volcano?’”

Dr. Frank Ramos, Johnson Chair of Geochemistry at New Mexico State University, mentored Michelfelder when he was pursuing his degrees. He’s been impressed with Michelfedler’s ability to involve students throughout the research process.

“Gary does a great job integrating master student research projects into excellent publications that have significant scientific contributions to our field,” Ramos said. 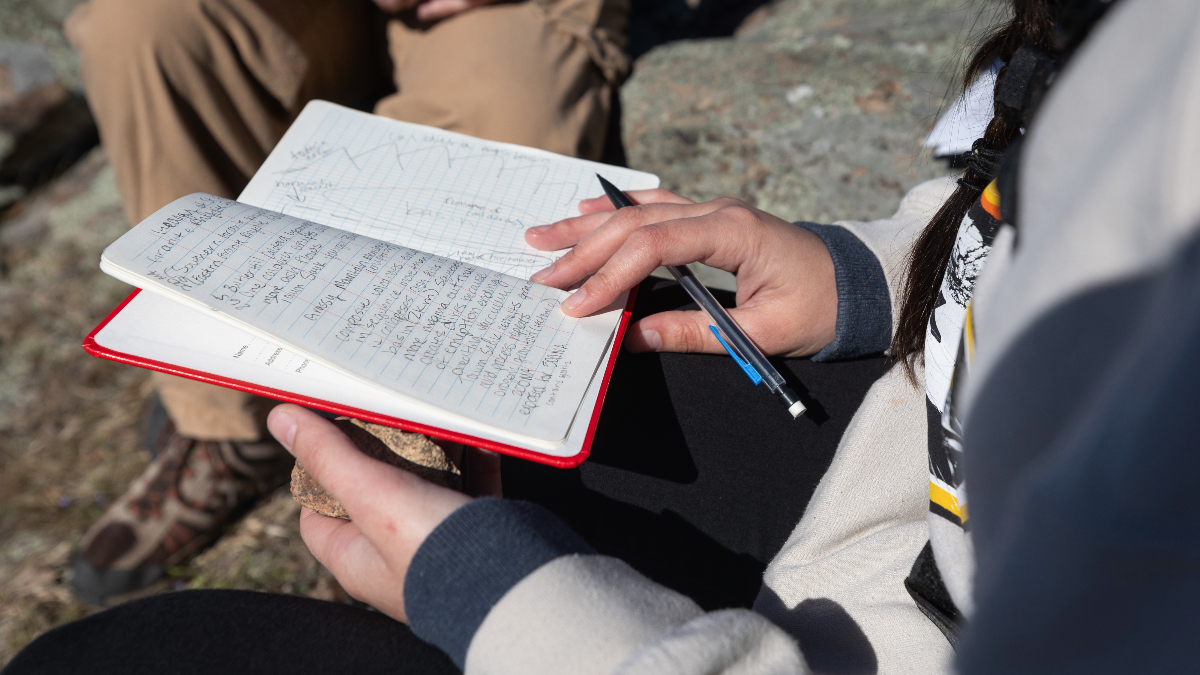 Each research excursion is ripe for new learning opportunities.

To find the answers they seek, Michelfelder employs many methods. One of them is analyzing the rocks.

He says you can learn a lot by bringing rock samples back to the lab. The team crushes the rock, dissolves it and analyzes the chemical composition.

“Even though the volcano may not look like a volcano anymore, and it may not be erupting currently, it is an active and dangerous environment. Every volcano is its own animal, so to speak, and it behaves differently every time it erupts.”

These rocks also are enriching teaching tools in his classes, Michelfelder noted.

Using a mass spectrometer, his team tests individual mineral grains. This technique uses a laser to discern the chemistry.

They work with Dr. Lawrence Horkely, a professor at the University of Iowa, to date the rock samples using highly sensitive equipment, which allows for precision in dating eruptions. It also can help identify how long the rock was in the magma chamber prior to erupting.

“It’s powerful to put together a detailed history of what a mineral experienced from the time that it was formed as magma, to the time it erupted at the surface,” he added.

Prior to COVID-19, Michelfelder started incorporating new technology into the project. He took student researchers to Chile to fly drones into the crater of the volcanoes to map the plans for the project.

Due to COVID-19- related travel restrictions, this became impossible. Instead, Michelfelder partnered with Dr. Felipe Aguilera, the director of the Central Andes Volcano Observatory, to gain data from his drone work.

“He takes gas measurements to help us with the volcanic hazards component of our projects,” Michelfelder said. “Our team will be able to explain what triggers the eruptions. His drone data will help us to understand the actual eruption.” 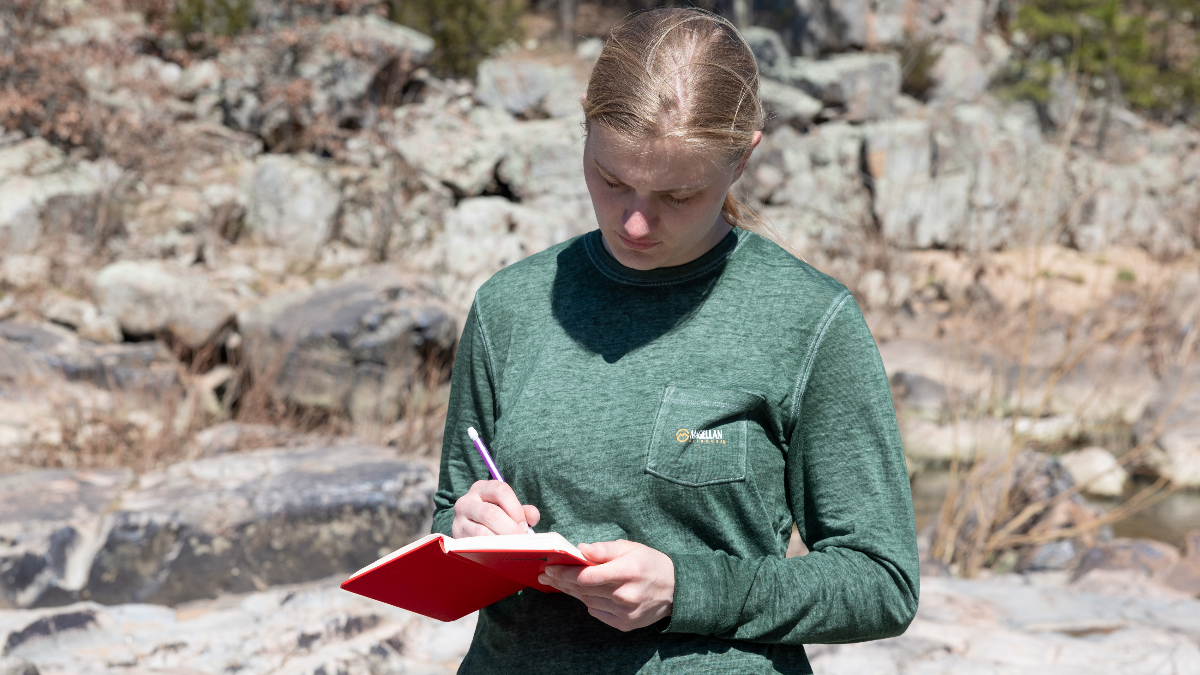 Surrounded by the beauty of the outdoors, student Sarah Peterson takes notes on the geology of the mountains.

Magma on the move

By investigating all these factors, Michelfelder and his team hope to better forecast the level of devastation to expect out of future eruptions.

At the site in the Andes, the team’s findings reveal the magma isn’t staying in any of the stages long before moving.

“We thought it might be residing for a hundred thousand years or more. Instead, the initial conclusion from evaluating the first two volcanoes is that it’s an ever-changing system,” he said.

What’s the downside of this early finding?

“We don’t have the long history of what’s going on there to be able to forecast what might happen in the future. Every eruption’s been different. It makes it difficult to say, ‘this is what this volcano will behave like in the future.’”

Difficult, yes. Worthy of continued research? According to Michelfelder, “absolutely.”