“It’s been called ‘the most taught book on college campuses in the United States,’” said Dr. Linda Trinh Moser, professor in the department of English.

She was referring to Maxine Hong Kingston’s 1977 book “The Woman Warrior: Memoirs of a Girlhood Among Ghosts.” Moser, an expert on Kingston’s work, recently edited a collection of essays that commemorated the 40th anniversary of its publication.

With co-editor Dr. Kathryn West, Moser curated a diverse set of interpretations of this famous book.

“The essays focus on different issues,” said Moser — in part because the book is relevant to so many fields of study. “It’s literary; it’s memoir,” she said. “And it’s meaningful for gender studies and ethnic studies.” Its publication also marked a milestone in Asian-American writing.

However, Moser said, it’s a mistake to assume “The Woman Warrior” is a definitive version of Asian-American experience. “It’s not a guidebook to Chinese American culture,” she said.

In her own essay, Moser noted that since “The Woman Warrior” was published, its author has resisted attempts to present her work as the exemplar of the Asian-American experience.

“’The Woman Warrior’ suggests that stories, fantasy and subjective experience are as much a part of reality as objective fact.” — Dr. Linda Trinh Moser

“Kingston continues … the process of questioning and revision,” Moser wrote. “In this way, she resists the assumption that an ethnic American writer should serve as a guide whose sole purpose is to provide … information for her readers.”

In some sense, then, Kingston’s book asserts a deeper purpose: a commitment to understanding the complexity of identity and desire to encourage a similar process in her readers.

And this quality makes Kingston’s narrative intensely individual. “This is one person’s experience,” Moser said.

This may be the reason “The Woman Warrior” was labeled a memoir of Kingston’s life growing up in California with parents who had immigrated from China. Since its publication, though, critics have questioned whether the story ventures too far beyond the material reality of Kingston’s own experiences to really be “authentic” or “real.” It draws on fantasy and myth, such as the story of Fa Mu Lan (the basis of Disney’s “Mulan”). The narrative also stretches time and space in ways that can’t be strictly factual.

This, according to Moser, is the point. “’The Woman Warrior,’” she wrote, “suggests that stories, fantasy and subjective experience are as much a part of reality as objective fact.”

The search for layers of meaning is central to Moser’s work as a literature scholar.

“I seek out books that cross cultures and tell stories about protagonists who are trying to maneuver different cultures,” she said. “I do that in my teaching, and I do that in my research as well.”

This approach means she often exposes her students to new perspectives. By studying literature, they find new areas of understanding — and sometimes commonality.

“I seek out books that cross cultures and tell stories about protagonists who are trying to maneuver different cultures.” — Dr. Linda Trinh Moser

For instance, she said “The Woman Warrior” brings up ideas that are relevant to people from a variety of cultural backgrounds. We all have to navigate the different cultures in which we live, the ways we define ourselves and the ways we are defined by our communities.

Kingston’s sense of self is complicated by a growing awareness of her “minority” status as she is growing up. Among Chinese immigrants, she is bombarded with messages about female inferiority; in the larger U.S. community, she faces racism as well as patriarchy.

“Kingston is forthright about social injustice, not only in Chinese-American culture, but in Anglo-American culture as well,” Moser said. “As a woman, she feels she’s been silenced; that’s where the ‘warrior’ in the title comes in.”

Moser continued, “But she’s saying, ‘I don’t want to just point the finger at the patriarchy in my parents’ culture. I want readers to recognize the patriarchy that occurs in their own culture.’”

And as Moser’s previous research reveals, this kind of cultural examination isn’t unique to Kingston’s writing. 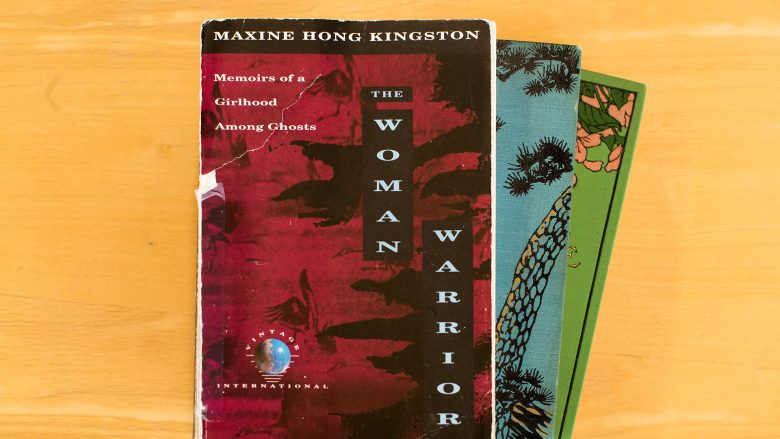 As a literature scholar, Dr. Linda Trinh Moser explores how concepts of identity, race, culture and ethnicity are handled in text. Photo by Jesse Scheve

In multiple publications, Moser has explored the career of Winnifred Eaton, described as “the first novelist of Asian ancestry to be published in the United States.”

Eaton’s success as a bestselling novelist during the early 20th century attracted Moser’s attention. As she dove into Eaton’s work, she found an intriguing level of complexity.

Eaton, who most often wrote under the pen name Onoto Watanna, was biracial. Her father was British, and she implied (through her choice of pen name and other strategically leaked details of her life) that her mother’s ancestry was Japanese. In actuality, her mother was from China.

According to Moser, Eaton’s decision to engage in this ethnic masquerade was influenced by the stereotypes of her time.

Moser wrote, “During the early part of Eaton’s career, North Americans drew a sharp distinction between Chinese and Japanese immigrants. Although anti-Chinese sentiment ran rampant at the turn of the century, the Japanese were admired … Eaton, aware of the difference, exploits notions of class perception” by claiming Japanese, rather than Chinese, heritage.

And, historically, this perspective cuts deep. According to Moser, “(In early scholarship), when mentioned at all, (Eaton’s pen name Onoto Watanna) stood for racial, ethnic or cultural betrayal.”

But Moser’s research brought her to a more nuanced understanding.

Working within the popular romance genre and navigating the social prejudices of her time, Eaton found ways to highlight strong female characters and cross-racial storylines.

Her stories resist “the image of Asian women as victims … Refusing to rely on male protection, these heroines are self-reliant,” Moser wrote. They “support themselves financially,” a challenge Eaton knew much about; as a working writer in Jazz Age America, she did it, too. In addition to writing short stories, travel essays and novels, Eaton wrote screenplays in Hollywood.

Moser recognizes how Eaton’s “Japanese” persona “allowed her to avoid the animosity Chinese immigrants experienced and to present a biracial Asian identity similar to her actual one, despite its inauthenticity.”

Even so, Eaton’s choice is a denial of her ethnic identity, which makes it hard for modern audiences to accept. To Eaton, the stereotyping of Japan as “better” than China must have seemed arbitrary. To fight against the prejudices of her time, she used the cultural ignorance as a weapon. If most Americans couldn’t tell the difference between Japanese and Chinese immigrants, why shouldn’t she pretend to be Japanese?

And in this way, Eaton was wrestling with the same questions Kingston posed decades later in “The Woman Warrior”: How do I define myself? How do others perceive me? How much do these versions of me overlap? How do I fit in to the world I live in?

In a country as multicultural and ever-changing as the United States, such questions are always fresh and relevant. Moser’s research illustrates how literature — whether scholarly favorites like “The Woman Warrior” or popular novels like the ones Eaton wrote — can be a platform to explore such questions.

When students, scholars or book clubs read and discuss books, they’re often contending with race, class and gender. Such discussions help illuminate the ways these issues affect and define our own identities. 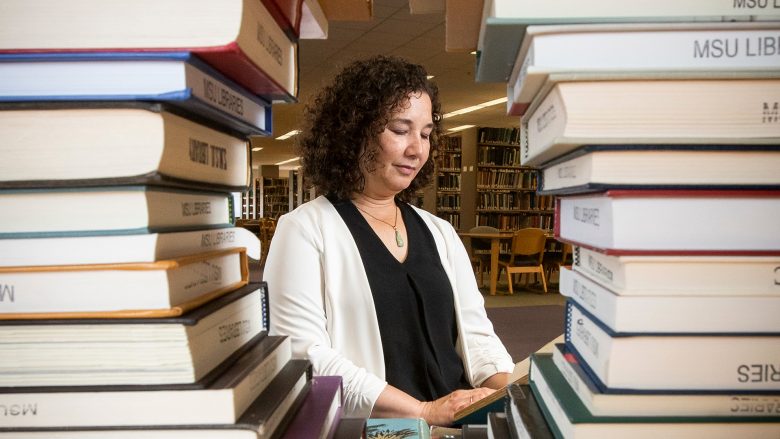 Just as Moser’s research explores the richness and complexity of American literature, she applies a highly dimensional outlook toward the students she teaches and advises.

“She’s always been very empathetic about the ways life can get in the way of our goals,” said Moser’s colleague Dr. Keri Franklin.

“She’s always been very empathetic about the ways life can get in the way of our goals.” — Dr. Keri Franklin

“She had these file folders,” Franklin said. “She called them her ‘cold case files.’ They were people who hadn’t graduated. She went through them all and found out what they still needed to earn their degrees. She contacted each of them, and many people ended up graduating because she did that.”

Moser’s effort was important for student success and retention, but, Franklin said, that wasn’t the point.

“She didn’t do it for the numbers. She did it because she wanted to see people finish what they’d started. I really love that about her.”