Throughout my time volunteering for the Refugee and Immigrant Center for Education and Legal Services (RAICES) in San Antonio, Texas, and traveling to the Karnes Family Residential Center in Karnes, Texas, I discovered the true nature of why families are immigrating in large masses.

I also saw where in fact these families are from: the Northern Triangle (Guatemala, El Salvador, Honduras).

My first day was going to the Residential Center where mothers and their children are held while they await their credible fear interviews (CFI) and the response to their interview.

Explore a major in political science

I sat in with Barbara Hines, top immigration lawyer who spoke at Missouri State in fall 2016, as she interviewed a single mother from El Salvador with two young daughters.

What pushed her over the edge to make the long journey from El Salvador to the U.S. had been a point-blank threat in broad daylight – her story itself was enough to have a positive result for her CFI. However, toward the end of the CFI Prep, she mentioned her daughter having experiences of her own related to gang violence.

I volunteered to interview her 14-year old daughter. She sobbed and shook as she told her story. She began with an incident where she was playing soccer at school when two classmates asked her to go with them to make copies. The classmates ended up taking her toward gang members from MS13. She tried turning around, but the girls grabbed her and dragged her toward them.

She screamed and pleaded and tried getting loose – finally biting one of them – and another group of classmates heard her and then came to her rescue. Although she was fortunately saved from major harm that day, it wasn’t the only encounter she had with these people.

She once had a rod shoved through her knee and on a different occasion, she was shoved and fell on something that cut her eye nearly deep enough to almost blind her. These encounters, along with her mother’s, drove them to flee and seek asylum.

This was my first case at Karnes within only a few hours of stepping foot into the building for the first time. I heard many more tragedies such as this while volunteering at Karnes. This little girl truly impacted me to the point that I will never forget the fear in her eyes. 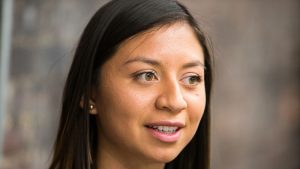 I also got to meet two immigration judges who couldn’t have been more different in their demeanor: one who was intimidating and one who was comforting. Watching their proceedings, and their interactions with the women, made me realize how much gets lost in translation.

Colloquialisms vary depending on home country, and because the translator is often on the telephone rather than in the room, they miss nonverbal cues.

The women who are fortunate enough to receive a positive response leave the detention center. Those who have travel arrangements (made and paid for often by friends or family) are taken by Immigration and Customs Enforcement (ICE) and are released to the nearest Greyhound bus station or airport.

This is cause for excitement and, in a way, good news for them. But they have nothing more than a reusable grocery tote with everything they now possess in the world.

Volunteers like myself go to these bus stations and teach each woman to know how to read their bus ticket, including layovers, where and when they will switch buses, and pronunciation of cities.

You must remember that the countries they are coming from don’t resemble the U.S. in the least bit. Also, some are illiterate and even if they could read they don’t speak English to read their tickets or be able to ask to get around each bus station until they get to their final destination.

Help a refugee family in need 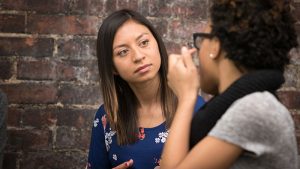 Listening to these mothers’ stories and seeing their children’s fear and sadness for what they have lived through – and also for their uncertain future – was disheartening.

The entire process leads to this traumatized group of people into re-traumatization through essential incarceration and having to relive the experiences and share shameful and taboo (by their culture’s standards) information with multiple strangers.

Before this experience, I was a supporter of immigration reform. Now, I want to pursue a career in immigration law. It has completely changed me.

Personally, there was a time when admitting I was an immigrant was rather shameful because of the stigma the word immigrant has. I never thought I would see a day in which people would hold signs in public stating that their legal or lack of legal status. A time when people would step from outside the shadows and no longer accept feeling less because of the label “illegal immigrant.”

I am beyond grateful for the incredible opportunity from which I have grown personally, intellectually and academically.