Volunteering for a nonprofit organization like RAICES has been a true eye opening experience. Before volunteering, I knew next to nothing about America’s immigration system and why so many immigrants were fleeing their countries.

Due to the fact that I do not have a personal connection with this issue, I never took the time to investigate further than social media and briefly watching news reports. This was a mistake on my part.

I am not a fluent Spanish speaker, so it was difficult to interact with the women and children directly since none of them spoke English. But one story sticks out to me above all the others.

Explore a major in political science

The first court hearing that I was able to sit in on was very stressful. The way the court room was set up was much different than what I am used to.

Judge Harlow, who ultimately has the final say in whether the person on trial is deported back to their country, has no personal contact with the defendant. I had a hard time listening as Harlow asked, through an interpreter, the defendants questions that I felt were unnecessary.

A mother and her teenage son were fleeing their country due to gang violence and hoped for a safer life in the U.S. But they had failed to file a police report in their home country regarding any interactions with gangs.

I had heard previously that Harlow was not very lenient and often ordered those who fail to file a police report to be deported. By some miracle, Judge Harlow found the defendants to have a credible fear and allowed them to move forward with their asylum case. 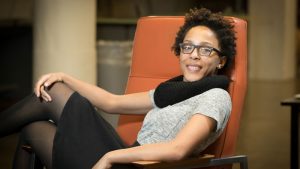 Ready to be an advocate for change

By having the privilege to work alongside such admirable people who are willing to go above and beyond for those who are not able to advocate for themselves, my stance on immigration has strengthened and has pushed me to seek more learning opportunities within the government field.

Since returning to Springfield, I have applied for a couple of internship opportunities that will allow me to work with others who also fight for equality and fairness for all.

I have also been eager to share my experience with anyone who will listen and hope that by spreading my knowledge over the subject matter, I will enlighten those who may be ignorant of the topic regarding immigration.

The stories I heard about these women and children still haunt me today, but I am still grateful for the opportunity and encourage others, who have the strength, to volunteer with the wonderful group of people I had the pleasure of meeting.