Students in this course used writing, photography, videography and social media to create profiles of four members of the Missouri State community. These profiles were copied over to relevant University blogs and promoted via the homepage:

The promotion included “selfie” style photos and pull quotes from each profile. The quotes linked to full-length, multimedia features, such as one about alumnus and staff member Peng Zhang: 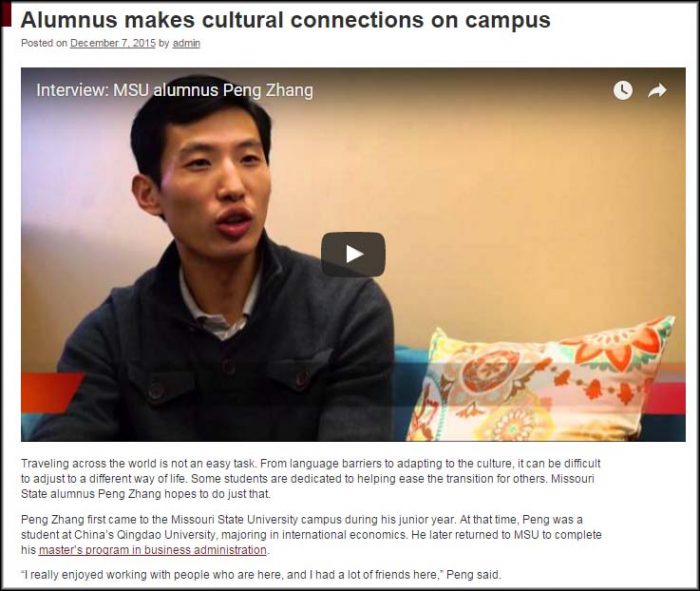 The full stories for each profile are linked below:

Web and new media planned a concurrent promotion of the material as part of the My Place Instagram initiative, which provides a “Bears-eye” view of Missouri State by presenting images from a specific student’s perspective.

In this case, the takeover subject was the course itself. The posts consisted of abbreviated versions of the profiles students created and pushed viewers back to the Missouri State homepage.

As part of JRN 478 (Multimedia Journalism), students from the departments of communication and media, journalism and film created portraits of people in the Missouri State community. Today we’re sharing their mosaic of maroon. #FollowYourPassion #FindYourPlace

“My personal motto is to live with no regrets.” Addison came to Missouri State determined to seize every opportunity. That perspective led her into new experiences, including engaging with national issues and presenting to an international audience about ideas that combat violent extremism. Learn more about Addison’s story by visiting the Missouri State homepage. #CitizenBear A photo posted by Missouri State University (@missouristate) on Dec 14, 2015 at 11:57am PST

This promotion resulted in a significant level of engagement during the week between Commencement and winter break, which is typically a time of less engagement.

During the week of Dec. 12 – 19, the stories received 1,045 pageviews. The average time-on-page was 2 minutes, 39 seconds; this indicates that visitors were meaningfully engaging with the content.

Traffic spiked on Dec. 14, the day the stories were promoted with an Instagram takeover; interest in the abbreviated Instagram stories appears to have driven visitors to the Missouri State website, where they explored the content further.

Lucie Amberg coordinates communications for the College of Arts and Letters.