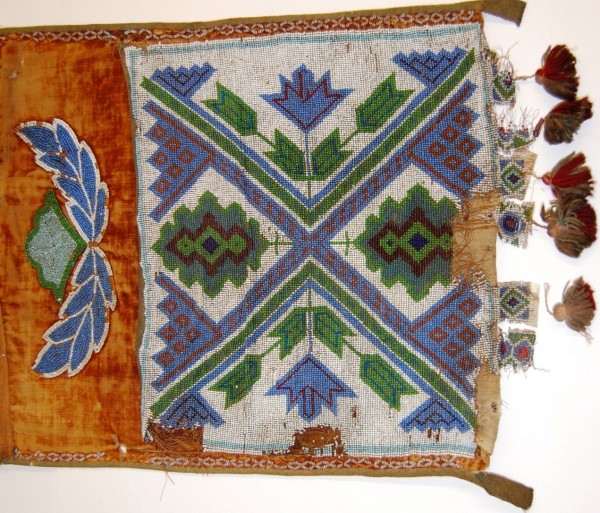 This beaded bandolier bag was likely made by the Native American cultures often called the Chippewa or the Ojibwe, but who are more properly known by the name they call themselves, the Anishinabe. The Anishinabe are part of the larger central Algonquian group of cultures that also include the Potawatomi, the Ottawa, the Iroquois, the Illinois, the Miami, and the Algonquian proper, and these Eastern Woodlands cultures widely shared and traded their ideas and artistic designs. The highly creative and decorative art of beadwork is traditionally a women’s domain among Eastern Woodlands cultures, and the female artists were historically and are today celebrated for their innovative beading techniques and beautiful designs. The bandolier bag is known in the Anishinabe language as aazhoningw a’iganag, which means “something worn across the shoulder.”

These bags are worn with the wide strap on one shoulder and crossing over the body so the bag rests on the opposite hip; sometimes two are worn with the straps crossing the chest, somewhat resembling bandoliers, or ammunition carrying straps. Bandolier bags were traditionally made for men, but today women wear them as well. The bags developed from decorated but functional leather carrying pouches to more decorative cloth and velvet bags that are heavily embellished with quillwork, bone and shell decorations, beadwork, and tassels; they are worn today as ceremonial dress and symbols of wealth.

The main, loom-woven panel on the pocket of this bag features the Anishinabe “X” design, which represents the number four. Four is a very important and meaningful number for the Anishinabe, as it indicates the four seasons, the four directions, the four layers of the sky, the four parts of a tree, and the four parts of life. Within each of the four quadrants of the X are geometric branch and floral designs. Above the pocket is a flower-and leaf design that is hand-beaded directly onto the bag, and down the sides of the bag is a hand-beaded border of tiny diamond shapes. The tabs below the pocket feature diamond motifs as well as a geometric motif known as the otter tail design, along with decorative yarn tassels. These different designs and techniques illustrate the diversity and skill of the artist, who clearly had mastered this artform.