You are here: Home / Archives for mizzou 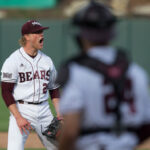 The Missouri State Bears are aiming for more NCAA Tournament success and looking to improve upon their Super Regional appearance in 2015. Junior third baseman Jake Burger was just named to the midseason player watch list for the Golden Spikes Award, which is given annually to college baseball's best player. He is considered a possible first-round choice in June's major league … END_OF_DOCUMENT_TOKEN_TO_BE_REPLACED