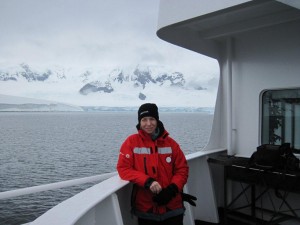 One of Missouri State’s media, journalism and film department professors recently set out on a journey through Antarctica in the hopes of discovering the true mysteries that lie at the bottom of the world.

Thanks to a Missouri State creative research grant, Diana Botsford, screenwriting professor and novelist, rang in the New Year on a 10-day expedition through Antarctica on the ship M/V Polar Star.

“I needed to learn as much as possible about Antarctica for a novel I’m currently writing (“The Drift”),” Botsford said. “There are, after all, just so many times you can use the word ‘cold’ without being redundant.”

“The Drift” is a media tie-in novel that is set to accompany Botsford’s first novel “Stargate SG-1: Four Dragons.” The plot for “The Drift” is set in the Stargate SG-1 universe and features several characters as they trek across Antarctica. This is what spurred her desire to truly discover Antarctica with her own eyes, rather than through the writings of others. 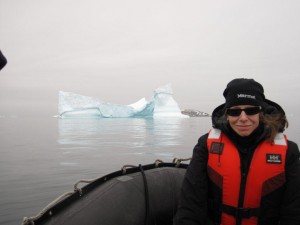 The expedition through Antarctica took Botsford through the Drake Passage to the Arctowski Station followed by Aitcho and Deception Island, Vernadsky, Yalours, Pleneau, Port Lockroy, Paradise Harbor, Cierva Cove, and on to Antarctica’s Peninsula.

Botsford’s trip wasn’t without any hurdles. Before she even got on the ship, she dealt with flight delays and changes that caused her to arrive in Ushuaia, the gate city to Antarctica, 45 minutes before the ship was to depart. To add to the delays, the airline lost her luggage so she spent her time in Ushuaia purchasing the essentials that she would need. Botsford visited a half a dozen shops to replace her luggage with two sets of fleece pants, long johns, fleece pullovers, a fleece jacket, hat, cowl, scarf, mittens, sock liners and socks, basic toiletries, and a tube of serious sunblock.

“The idea that you can just hop on a few planes to get down to Ushuaia, or that you can easily replace high-tech polar gear at the last second is astounding when compared to the efforts made by the early polar explorers,” Botsford explained.

Along with visiting the stations, Botsford also attended lectures given by scientists and other explorers on the ship which helped give her other insights into the mysteries of the Antarctic. 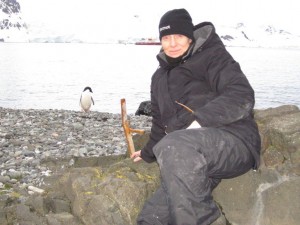 “Seeing the iconic black and white birds is more an afterthought to my reasons for coming, but I’m more than willing to enjoy the penguins—considered by superstitious seamen to be the lost souls of former sailors,” Botsford said. “Don’t get me wrong, they’re cute, but as my kid recently pointed out, the penguin is the pigeon of the Antarctic.”

Even more than the animal sightings, Botsford was excited to see the ice bergs and glaciers. Botsford remembers seeing streaks of a vibrant blue “reminiscent of the blue gel stripe in toothpaste” along the icebergs and in the ice around the Shetland Islands.

“[Seeing the glaciers was] humbling yet inspirational; all wrapped up into an unforgettable view of untamed wilderness,” Botsford said.

“The captain diverted the ship to rendezvous with a glorious iceberg surrounded by the most sterling blue water I’ve ever seen,” Botsford said. “A blue that put the Caribbean waters to shame.”

Getting to see the great expanse of snow and ice that is Antarctica, Botsford remembers that she had entirely forgotten about Facebook and wouldn’t have checked her e-mail if it wasn’t for her family back home.

Bringing her experience back to Missouri State, Botsford wants to impress upon students the importance of taking the time to relax and look at the world around them. In her screenwriting class, she plans to use photos from her Antarctica experience to help the students learn to explain what they see.

“From this experience, I learned that you need to pull your head out from all the distractions and pay attention to the real world. Shut off your phone, close Facebook and look at what’s around and see the beauty that’s around us,” Botsford said. “You can hear yourself think. You’ll be surprised what you can find that’s already in you.”

For a day-to-day breakdown of Botsford’s Antarctica trip as well as more photos and videos, visit her blog at dianabotsford.com. The following are some videos from Botsford’s blog and YouTube channel.

The first video of a whale sighting Botsford encountered.

The second video is of Lockrey penguins.

The third video features a penguin swimming next to an ice berg where
you can see the deep blue that Botsford talks about.