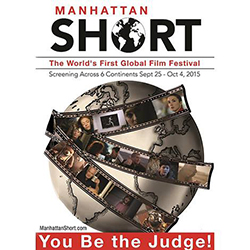 Join 100,000 viewers across the world Oct. 3 to vote in the 18th Annual Manhattan Short Film Festival.

Each year, Missouri State’s College of Arts and Letters and the Department of Media, Journalism and Film bring the festival to campus, offering the community a chance to participate in the only global audience-choice film festival in the world. Festival-goers will vote on 10 finalists, chosen from more than 550 short films from filmmakers worldwide.

The Plaster Student Union Theater is the only venue in Missouri to see these international films. Doors open at 6:30 p.m.

How does it work?

Viewers will be given a ballot upon arrival that they will fill out at the end of the 10 films, participating in the instantaneous celebration occurring in over 300 cities around the globe during the span of a week. Votes are tallied by each cinema and sent to the festival headquarters. The winner will be announced Oct. 5.

Cost is $10 at the door. Proceeds will help support student film production in the media, journalism and film department through the MSU Digital Film Production Scholarship.