Abby Burnett’s fascination with cemeteries started when she was a child.

As she tells it to the Arkansas Educational Television Network in “Silent Storytellers,” her grandfather, a cemetery record keeper, introduced her to the art of piecing together the stories of those buried.

Burnett, who was featured in AETN’s “Silent Storytellers” documentary in 2010, will be on campus Sept. 14 as part of the Ozarks Lecture Series the week after the Ozarks Celebration Festival. Her presentation will be based on her 2014 book, “Gone to the Grave: Burial Customs of the Arkansas Ozarks, 1850-1950.”

Burnett is an independent researcher and writer in northwestern Arkansas who specializes in cemeteries and burial customs. She is an active member of the Association for Gravestone Studies and a regular contributor to its quarterly bulletin. 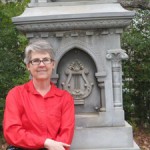 In addition to her work on cemeteries, Burnett has published several articles on local and regional history and co-wrote the book “When the Presbyterians Came to Kingston in 2000,” a new edition of which is being released later this year.

When will she present?

About the lecture series

The Ozarks Lecture Series occurs the week after the Ozarks Celebration Festival and features lectures on the history and culture of the Ozarks. Visit the festival website for more information about the festival including participants and a schedule of events.