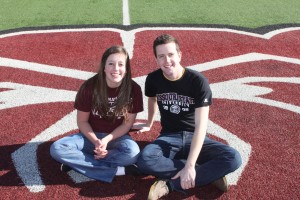 With Missouri State’s Homecoming well under way, one graduate will definitely be making the trip back to celebrate. That alumni is this week’s LeaderBear, Scott Turk.  Scott was very involved as an undergraduate and can’t miss an opportunity to come back and show some of his bear pride.  As an undergraduate he was awarded the high honor of Student Body President. He was also very involved in fraternity and sorority life serving as a Greek Week Director and the Vice President of his fraternity, Theta Chi.  His fraternal achievements eventually won him the highest award that Theta Chi nationals awards to an individual.

His passion for politics also took him on a trip Washington, D.C. to lobby on behalf of Theta Chi on a fraternal housing initiative. This passion led him to working in the Missouri House of Representatives as well as helping with various political campaigns in Missouri after his graduation from Missouri State in 2013.  He graduated with a Bachelor’s degree in socio-political communication and recently starting law school this fall at the University of Missouri.

As an undergraduate Scott completed both the Commerce Bank Emerging Leaders and Distinction in Public Affairs programs. His top strengths are: Individualization, Achiever, Ideation, Woo, and Input.

“I will continue to utilize the many things that I learned throughout my time at Missouri State through programs offered from the OSE; however, by far the biggest thing that I have learned is the importance of incorporating and understanding that the best team is a diverse team. Too many fall into the pit of surrounding themselves with like minded individuals in order to reaffirm their own ideas. I learned that everyone is able to bring a unique perspective that will challenge the group and bring them to an entirely new level of growth. Diversity is not merely a benefit, it is a necessity.“

“My biggest advice can be a lesson and important quote that I heard from an incredible role model of mine, Jim Anderson. When doing our Distinction in Public Affairs Project, he is quoted as encouraging students to “be a sponge” when it comes to interacting with the multitude of different individuals that we encounter during our time at college. Nothing is more important than the lessons that others carry, as everyone can teach us something different.”