When they first met at Missouri State, Lauren Cook, Lanae Flatness and Demi Nguyen had no idea their friendship would span years and take them across the globe. Nearly five years later, their friendship continues to flourish.

Lauren was born and raised in Springfield, MO, and attended DePaul University in Chicago where she studied Digital Cinema with a minor in Marketing. Lanae, also a Springfield-native, received her undergraduate degree in Management: International Business Administration with minors in Spanish and Economics from Missouri State. Demi grew up in Ho Chi Minh City, Vietnam, and she received her bachelor’s degree in International Economics from Foreign Trade University.

The three crossed paths at Missouri State while simultaneously pursuing Master of Business Administration degrees. Lauren and Lanae met during their first year in the program when they both enrolled in Dr. Chuck Herman’s International Marketing class trip to Costa Rica. Lanae was also a member of MSU’s Ad Team, which meant she spent a lot of time in the Marketing Department where Lauren served as a Graduate Assistant. Lauren and Lanae took several classes together and had mutual friends having both grown up in Springfield.

Demi moved to Springfield in 2014 after deciding to pursue an MBA at Missouri State. She looked forward to the opportunity to explore a new country and its culture. Demi took a graduate assistantship in the Marketing Department and shared an office with Lauren. In their same office was Brittney Laramie, co-president of the Ad Team with Lanae, which meant Lanae spent a great amount of time in their office.

Lanae says, “Working as graduate assistants for the College of Business put us in similar circles, but I think the Marketing Department itself made the most impact. From the department head, administrative staff, faculty and everyone in between, they know how to make you feel like family.”

When Lauren, Lanae and Demi graduated with their MBAs, they found themselves on different paths. Lauren took a job with BRP Architects in Springfield as the Marketing Coordinator. She recently became a full-time freelancer working in videography, marketing consultation, design and photography. Lanae moved to Washington, DC, and works at Accenture as a Technology Strategy Consultant. Demi started her career with DHL Global Forwarding in Newark, New Jersey, as the Ocean Export Specialist. She currently serves as a Pricing (RFQ) Analyst for DHL.

Despite living in different cities across the country, the three have managed to keep their long-distance friendship thriving. They stay in touch and up to date with each other’s lives, and Facebook makes it even easier to maintain their connection. When they all find themselves back in Springfield, they always make a point to visit the Marketing Department to see their past professors and Administrative Assistant Sheryl Ruff-Hensley. 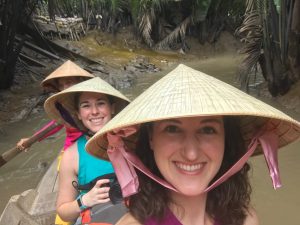 In February 2019, Demi invited Lauren and Lanae to join her in Vietnam to celebrate her wedding. Lauren and Lanae decided to travel to Vietnam ten days prior to the wedding to explore the country. They started their journey in Hanoi, then headed south after seeing Halong Bay to Hue, Hoi An, Mekong Delta region and then Ho Chi Minh City for the wedding. They describe how each day they learned more about the rich history and culture of the country while consuming one delicious dish after another. All three agree the time in Vietnam is one of their favorite memories together.

Lauren says, “The first night meeting up with Demi in Ho Chi Minh was absolutely one of my favorite memories of the three of us. It was so cool to see Demi in her element showing us around her city. She took us to some very authentic places away from the tourist areas of Ho Chi Minh including a street market, down an alley for dress fittings and a street vendor that served pork and broken rice, which was amazing!”

Lanae continues, “Although we were in a foreign country, with no other tourists in sight, it felt so natural. It was like no time had passed since the last time we saw each other.”

“It was kind of strange and funny to see my foreign friends in my neighborhood,” Demi says. She recalls putting Lauren on a scooter with her husband, Huy, and seeing a mix of excitement and terror on her face. Riding a scooter is not uncommon in Vietnam, but it can be overwhelming for newcomers in one of the busiest areas of the city.

When it came time for Demi and Huy’s special day, their wedding consisted of three parts. The wedding started early with a traditional ceremony where the groom’s family visits the bride’s house with symbolic gifts, jewelry and money to ask permission from the bride’s family for the couple to marry. Afterward, they traveled to the groom’s house for another set of rituals. The entire ceremony is a Vietnamese tradition. Demi and her family are Catholic, so they added a mass service that her Christian family and guests attended. After the mass, they held a reception. The typical size of a wedding in Vietnam is around 300-800 people. At 400 people, Demi and Huy’s wedding was actually considered small.

When asked to give one piece of advice to current students, Lauren suggests, “Have a plan, but make it in pencil. It’s great to have an idea of what you want to do, but sometimes opportunities come up in unexpected places. Be open to them, you’ll never know where you’ll end up.”

For students who are starting internships or careers in new cities, Lanae has two pieces of advice that have helped her since moving from Springfield to Washington, DC. First, she says, “No matter how long you think you’ll be somewhere, build a community. You never know when and how people will weave in and out of your life, but if you don’t try to build a support system, a local family of sorts, you’ll always feel like a visitor.” Second, she says to stay connected to the people who encouraged you along the way.

Demi says, “I think it is important to be open to diversity: respect and learn from friends that are from different cultures, don’t surround yourself with a same-background group of friends, instead try to blend in others and travel as much as you can.”