Adults take for granted the ability to resolve conflict — a skill perfected over a lifetime. Children, particularly those termed “at-risk,” haven’t had the necessary experiences or guidance for it, sometimes landing them in juvenile detention as a result.

Missouri State professor Dr. Charlene Berquist hopes to offer victims, offenders and other at-risk youths the opportunity to build the skills needed to pull themselves out of a justice system that may swallow them up.

“We’re loud and we’re boisterous. When there’s a conflict, we yell and deal with it, and then we hug and make up.” — Dr. Charlene Berquist 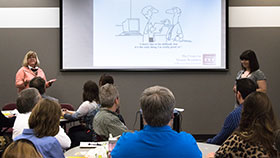 Her passion for this work started as an inquisitive fourth grader.

At that time Berquist recognized not all families argued like her own. “We’re loud and we’re boisterous. When there’s a conflict, we yell and deal with it, and then we hug and make up.”

The idea that other families react differently sparked a curiosity that would endure as a communication scholar and as director for the Missouri State’s Center for Dispute Resolution (CDR).

As director, Berquist is uniquely positioned to study the effects of conflict resolution programs, for both participants and facilitators. The center, serving as a laboratory of sorts with students, staff and volunteers, gathers research data throughout the mediation process.

“I would describe my research as being very qualitative. Typically I’m more interested in interviews and focus groups and the ‘why’ about research. Not just, ‘Am I satisfied with this program?’ But, ‘Why am I satisfied? How do I understand the experience?’”

The center’s mediation services, such as the Circles for Girls and Restorative Justice programs, were based on needs identified by its community partners. Berquist’s team used existing research to develop each program and distinguish research components to be analyzed, making tweaks over time based on the resulting data.

“We’re asking some fairly cutting edge questions,” she said. “I’m also interested in how particularly at-risk kids understand those experiences and how they apply what has happened in that program to their lives.” 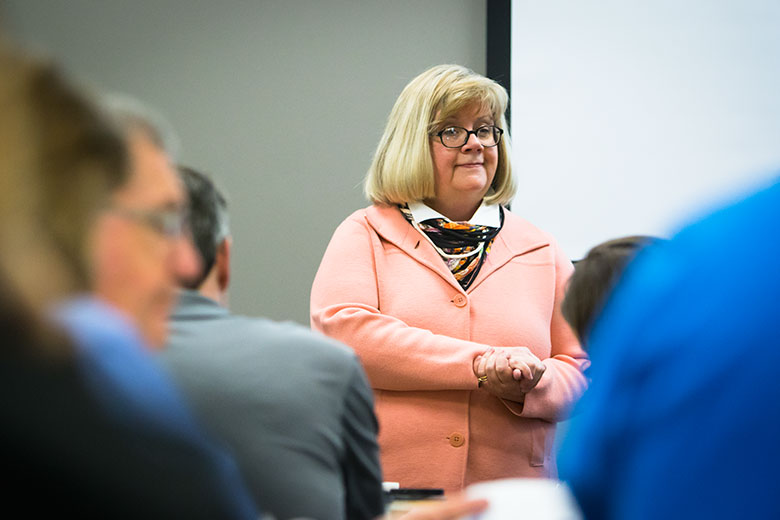 Radical changes occur in pre-teen and teenage girls and the difficult transition into adulthood can lead to unhealthy relationships, body image issues and substance abuse. Area schools identify those struggling youths, aged 12 to 17, referring them to the CDR to meet with facilitators in groups of four to 10 for up to 10 weeks. Through skill-building exercises and journaling, the center hopes to impact social, emotional and physical well-being.

“…we had examples of girls, two or three years down the road, who remembered what their facilitators had said in journals to them that had a real effect on a choice they made or a different trajectory in their lives.” — Dr. Berquist

Berquist said the CDR has made some amazing discoveries, including improvements to the participants’ grades and that families often continue to use communication skills gained.

“I think most striking was that we had examples of girls, two or three years down the road, who remembered what their facilitators had said in journals to them that had a real effect on a choice they made or a different trajectory in their lives.”

Offenders rarely meet or speak to victims face-to-face; they are punished and put in the system with little to no rehabilitative support. Victims are left wondering why them and what kind of person would hurt another. Through its Restorative Justice programs, the CDR attempts to facilitate that closure and accountability between victims and offenders.

“…it was the first time they had really thought about a different way to react to someone doing something bad to them….” — Dr. Berquist

First- and second-time juvenile offenders are paired with their victims or community volunteers who have been victims to discuss the impact of the crime. Berquist said the offender’s observations of victims’ reactions have been interesting.

“Kids described that it was the first time they had really thought about a different way to react to someone doing something bad to them — not just lashing out at that person, but forgiving them or acting in a different way.” 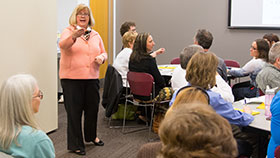 Through these discoveries, Berquist said the CDR continues to make changes to accommodate future participants. In addition, she noted that they are also analyzing data about how the process affects facilitators.

“Because we’re doing so many different kinds of programs here, we present at conferences and write about what our experiences have been like in doing these programs, and hopefully other people can learn from both some of our successes but also some of our mistakes.”