Economics professors look for value in the night sky

Some see romance. Others see the future. But rarely do people see the night sky the way these Missouri State researchers do – in dollar signs.

In a time where the importance of outsourced goods is the topic of most economic discussions, the night sky has not had its due as an economic resource. That’s an issue economics professors Dr. Terrel Gallaway and Dr. David Mitchell hope to address.

Gallaway and Mitchell, along with professor Dr. Reed Olsen, have spent six years researching the question: what really is the overall economic value of the night sky? Assessing the value and importance of the night sky could mean millions more dollars for tourism industries and other key areas. 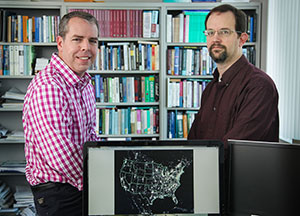 Gallaway and Mitchell, along with professor Dr. Reed Olsen, have spent six years researching the question: what really is the overall economic value of the night sky?

Today, the wonder of a clear night sky is threatened by the careless use of artificial light. Research shows about 25 percent of electricity that is produced in the U.S. is used for lighting and an estimated 30 percent of that is wasted as light pollution—about $25-30 billion dollars a year. The two Missouri State economics professors are looking to determine how much Americans are willing to do to address this dilemma.

The team conducted numerous surveys that ask average citizens questions like “how much do you think the night sky is worth?” and “how much would you pay to travel to this certain place?” in order to obtain an estimated value of dark night skies.

Gallaway and Mitchell focused their research on western national parks and areas like the Colorado plateau, where the sky is more pristine and there are more protected areas to incorporate in their research. This area of the U.S. brings in millions of dollars each year for travel and tourism and has huge potential because of its protected lands and views of the night sky.

“The night sky impacts wildlife, different types of flowers and trees and even migration,” said Mitchell. “If not protected, you’re in essence destroying half of the environment.” 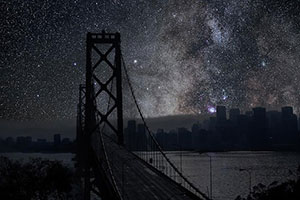 Along with the natural effects of the night sky, Gallaway and Mitchell have identified some health issues caused by the lack of it. Light often tricks the body into staying awake even if rest is needed, opening the door for major physical and mental issues to occur.

“It’s not just aesthetics,” Mitchell said. “The lack of an adequate sleep can lead to obesity, attention deficit hyperactivity disorder and even cancer.”

According to Mitchell, there is immense documentation that states when people don’t get good sleep at night, it interferes with their hormones. “In women, this could mean higher incidences of breast cancer,” said Mitchell. Other chronic conditions that could occur include diabetes, migraines and hypertension.

Though these health problems are preventable, determining the monetary value of the night sky may be a complicated task to accomplish. However, Gallaway and Mitchell don’t mind leading the way.

This research yielded the first grant the economic professors received from the National Park Service for this trail-blazing research. Although there have been studies  conducted concerning the conservation of America’s natural resources, little to no research has been done focusing primarily on night skies.

“Within the social sciences, especially with economics, there hasn’t been very much research done on this topic at all,” said Gallaway, “which sort of makes us the pioneers in this field.”