As a child growing up in Ukraine, Dr. Nikolay Gerasimchuk, professor of chemistry, learned about chemistry even sitting at the kitchen table.

“In our household was a jar of water at the table. In it was an old Czar Russian silver ruble at the bottom — a pure silver coin. That silver leeching slowly out in the solution provided pretty good sterilization of water.” 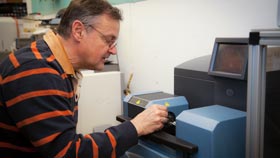 The antimicrobial property of silver is one key to a current research project Gerasimchuk is conducting 30 years after receiving his first doctorate degree in Kiev, Ukraine. He is developing a set of compounds that, when added in a small amount to light-curable polymeric medical adhesives, could be used to properly set medical indwelling devices and prevent infections at those sites. This coating mixture, which is also water insoluble, light insensitive and thermally stable to withstand the rigors of medical and dental procedures, is patent pending and not available yet. Gerasimchuk envisions a day, though, when it will be used with pacemakers, joint replacements and in dental implants.

“What we are hunting for is to make that interface between tissue and any indwelling device antimicrobial. Because what happens in many cases is that infection comes in place where the device is set, and we know what that means: The loss of productive lifetime, increased post-procedural rehabilitation and recovery time, pain and significant material cost needed to address the problem. ”

“The more I was doing this work, the more I realized how beautiful this group of molecules is.” — Dr. Nikolay Gerasimchuk

The common thread between each of Gerasimchuk’s research projects is a subclass of organic compounds that he discovered called cyanoximes. These compounds bind metal ions strongly and have many characteristics depending on what they’re bound to.

“The more I was doing this work, the more I realized how beautiful this group of molecules is,” he said. “I saw an opportunity to build a tinker toy, a Lego type approach, so we can keep one part of the molecule consistent and then add a huge variety of other parts to it to change the compounds’ properties such as solubility, bulkiness, color, etc.”

That’s exactly what he’s doing with his two other research projects, both of which also have medical applications. 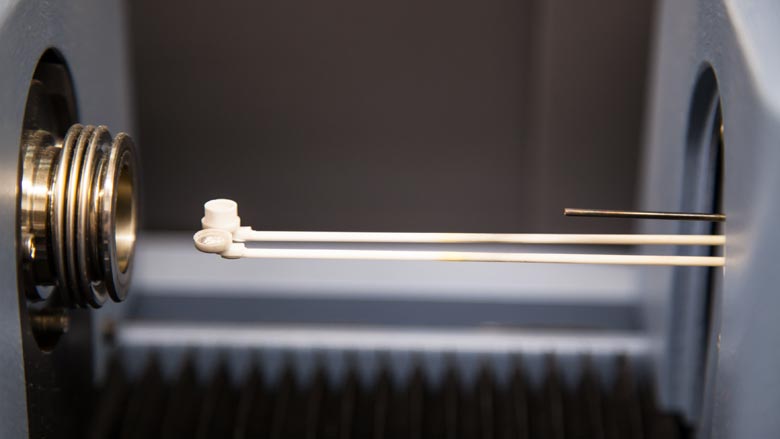 Many of the primary anticancer drugs are platinum based, Gerasimchuk explained, which poison every cell they encounter. These drugs work because cancer cells divide much faster than non-cancerous cells, and blocking that division cycle is one of the main tactics in the fight. But tumors build resistance to this type of drug. To improve the effectiveness of these drugs and alleviate side effects in cancer patients, Gerasimchuk is designing compounds structurally similar to these anticancer compounds and making them more water soluble by binding these substances to specifically designed cyanoximes.

He is also working to develop anticancer active compounds using cyanoximes with palladium, platinum’s neighbor on the periodic table.

“Palladium is much less toxic and much less expensive, so we are testing whether we will persistently see slightly better activity of our new palladium compounds compared to those with platinum. If so, then we can push for a new type of drug.” 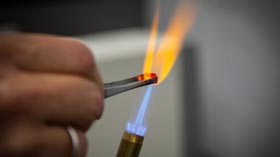 Approximately 15 years ago, a new scientific field was created called theranostics — a combination of therapy and diagnostics. It’s still being explored, and Gerasimchuk is contributing by designing and making platinum cyanoximes complexes to find tumors and ultimately act as anticancer agents.

Visualize a stack of poker chips with platinum centers. The stacks are flexible and loosely connected by a thin thread down the center of the stack. Electrons move along the thread, and as they move, they can absorb light in visible region of spectrum and re-emit it in the near-infrared region.

“What we would like to do is to put these compounds inside of cells or tissue. Since they emit light at this very specific range of wavelengths (near-infrared), it comes through tissue without being absorbed,” he explained.

For this project, Gerasimchuk partnered with Dr. Mikhail Berezin from Washington Medical School’s department of radiology, who built a $1 million piece of equipment that allows scientists to view in the near-infrared range. Their work on this theranostics project was published in the January 2015 issue of the American Chemical Society’s journal, Inorganic Chemistry.

With Berezin’s equipment and the patent-pending new infrared emitters, doctors could diagnose and target cancer cells.

“Once the compound disassembles due to metabolic processes, it acts as an anticancer agent and kill cancer cells. That is a very cool application!”