Music restores harmony in the lives of those with aphasia

Imagine you have suffered a serious stroke. You are unable to speak or follow a conversation. Since you cannot use language to connect with your family and friends, you become frustrated and depressed. 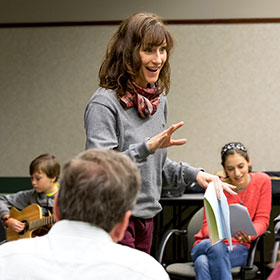 Although you identify yourself as the head of a household, now you are the recipient of care. Your spouse or child has assumed the role of care-provider, which may be a new role as well. The relationships in your family are feeling unbalanced because the power status has changed.

Dr. Alana Kozlowski, Missouri State University communication sciences and disorders assistant professor, studies people with an acquired communication disorder called aphasia. She has been working to develop a way for those with aphasia to have a rewarding, relaxing activity in an environment where those who struggle with verbalization are back on equal footing with those who care for them.

At the same time, she wanted to provide her graduate students with an opportunity to conduct qualitative research. So the Canada native started a community music-making group. She chose this activity because aphasia is caused by an injury to the left hemisphere of the brain, the area that controls language. The right hemisphere controls response to the components of music – melody, harmony and pitch. Participants in the music-making group could hum, tap, sing, or “just be among friends.” No prior musical experience was necessary.

Instead of focusing on what people with aphasia cannot do, Kozlowski and her graduate students are emphasizing what those who struggle with verbalization can do and they are building on those strengths. They are currently using a tool developed by the American Speech-Language-Hearing Association, the Quality of Communication Life Scale, to determine if participating in the music-making sessions has helped people with aphasia gain confidence in their communication abilities and/or living with their communication disorder. 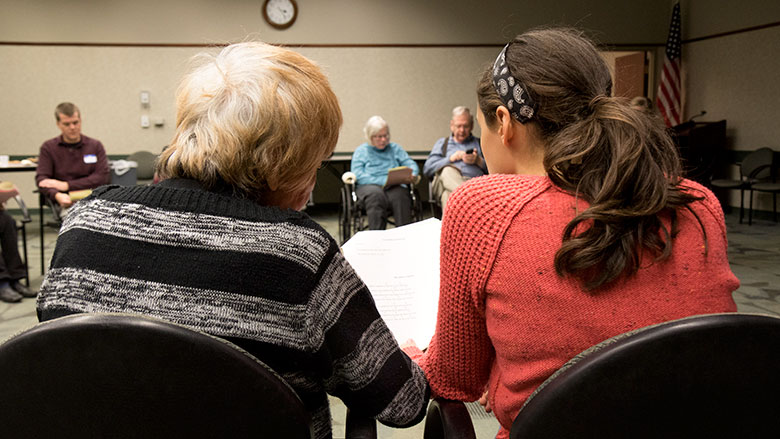 Will people with aphasia be willing to engage socially and feel better about it because of this shared successful experience? 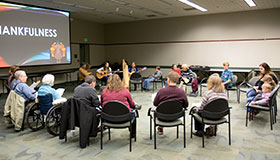 Someone who entered the room would see 15 people singing “Amazing Grace” and never guess that six of them would not be able to make a simple request such as asking for salt.

Before coming to MSU in 2010, Kozlowski worked for 15 years with individuals with aphasia in rehabilitation and acute-care settings, where her long-range goal often included helping clients “get their words back.” Although she found this type of speech-language therapy “incredibly rewarding,” Kozlowski began to consider what quality of life she could shape for an individual that would be reasonable and patient-driven.

During the 2015-16 academic year, a small group of people with aphasia and their caregivers joined “team Koz” twice a month to make music in a room at the Springfield-Greene County Library Center. Someone who entered the room would see 15 people singing “Amazing Grace” and never guess that six of them would not be able to make a simple request such as asking for salt. 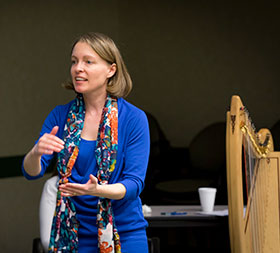 Harpist Clara Keller, a music therapist from Poughkeepsie, New York, who is pursuing a master’s degree in speech-language pathology from MSU, accompanied the singers. “I learned how powerful music is as a tool for language and social interaction when speech is lost,” she noted.

A participant whose wife experienced a stroke said she looks forward to the music-making sessions. “In our circles there are not any other people with aphasia,” he stated. “She doesn’t feel like she stands out here. Music comes out when words don’t.” The caregiver for a man who was a popular jazz musician prior to his stroke added that singing in the group enabled him to make friends and gave her an activity to do with him that allowed her to share what he was feeling at the moment.

The students’ research indicated the caregivers did not view the additional time commitment as a burden if it made their persons with aphasia feel integrated into a group and happier. The most surprising finding, Kozlowski said, was that the individuals with aphasia preferred to sing songs with words rather than songs without words, regardless of the difficulty of the song, and preferred to sing rather than play an instrument.

During the first round of sessions Kozlowski and her students validated the value of the sing-alongs in building camaraderie and providing a stress-free opportunity for those with aphasia to successfully communicate with their caregivers. The students presented their research at the Missouri Speech-Language-Hearing Association Convention in April 2016.

“People keep coming back to sing,” Kozlowski added with a smile. “We’re having fun. Can we capture why? Will people with aphasia be willing to engage socially and feel better about it because of this shared successful experience? If so, why would they not get the same positive experience in the store or in church?”

Get the help you need. Learn about the services at the Speech, Language and Hearing Clinic