“I typically arrived at the theater 90 minutes before the curtain went up,” Lisa Brescia said. She then moved through her yoga warmup and vocal exercises.

It was the seventh Broadway production for Brescia, assistant professor in the department of theatre and dance. Before joining Missouri State in 2016, she wowed audiences as Donna in “Mamma Mia!” and Elphaba in “Wicked.”

“My job is to tell this story, which is very emotionally loaded, in a way that reaches the audience.”

Brescia took an artistic leave from Missouri State, which allowed her to accept the contract with “Dear Evan Hansen.” She played Heidi, the title character’s mom.

Brescia described Heidi as “very flawed. She’s not killing it as a mom at all, but there are reasons for that. There’s a whole history that led her to the very moment the play begins.”

How she found her character

Exploring and inhabiting such history is a cornerstone of Brescia’s acting technique, which she teaches to her advanced acting students.

She requires them to get very specific about the given circumstances of their characters’ lives. Brescia’s students create extensive autobiographies for their characters, thoroughly defining the world in which the characters live. Such specificity, Brescia said, leads to the truthful behavior that’s central to good acting.

“So for instance, if I have a line about a childhood pet, say a dog named ‘Fox,’ I create a whole history for that,” she said. “Then when I’m on stage and I mention Fox, I’m actually experiencing a fully-realized memory, which enlivens the work.”

“Lisa sets professional expectations for her students, and she does it in a caring way. It’s leadership by example, and they rise to her example.” — Dr. Kurt Gerard Heinlein

As Brescia prepared for “Dear Evan Hansen,” she dug deep into the world of Heidi, a single mom trying to provide for her 17-year-old son. In addition to working full time at a nursing home, Heidi is attending night school to become a paralegal. She hopes this effort will improve her career trajectory and by extension, her sense of self-worth.

“She’s trying to juggle it all, and she’s flailing,” Brescia said.

And even though Heidi is a devoted mother, Brescia saw her “sometimes needing her son more than he needs her — or at least asking more from him. In some ways, she’s dependent on him.” 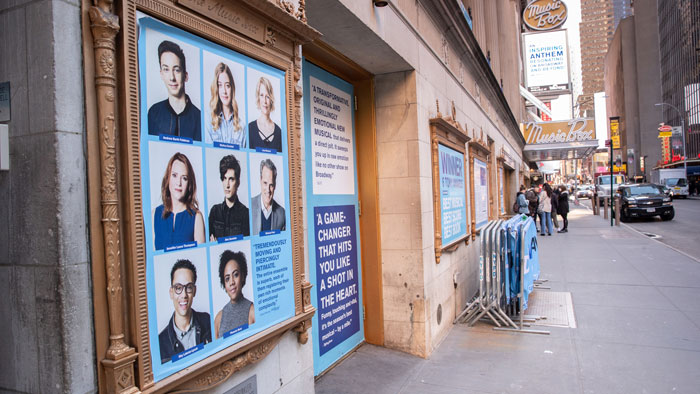 Each of these circumstances, Brescia said, contributed to her understanding of Heidi as “a very shame-based person.” The character seems hounded by the sense that she’s falling short; as Brescia put it, “she’s kind of embarrassed to be her. But she’s working so hard.”

And despite — or perhaps because of — this insight, Brescia developed deep affection for her character.

“I see her as someone who’s constantly willing to show up for everything and do her best,” Brescia said. “As imperfectly as she does, she still shows up.”

“Dear Evan Hansen” tackles complicated issues, such as mental illness and suicide. It approaches these hot buttons with openness and honesty, and audiences typically respond with enthusiasm.

Brescia knew this show called for emotional accessibility, but even amid highly charged moments, she kept her focus on telling the story.

“As I’ve gotten more experienced, I’ve been able to become more vulnerable. I’m also not afraid to get it wrong.”

“When actors are swimming in feelings, it can make us think the scene must be great,” she said. “But our job is to be full of those feelings and then put our attention on our scene partner. We have to make it about fighting for something.” She often reminds her students to ask, “What am I doing?” rather than “What am I feeling?”

And for Brescia, the chance to tell high-stakes stories like “Dear Evan Hansen” is a benefit of her work.

“I believe we all walk around with complexity and pain and grief inside,” she said. “I get to let it all out and leave it on the stage.”

This took physical stamina, particularly because she was performing on a raked stage, which means the stage platform itself was built on an angle with a downward slope toward the audience. 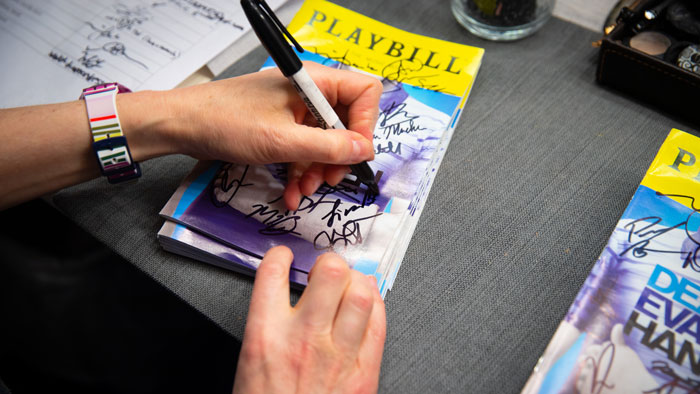 “It’s prettier from the audience’s point of the view,” Brescia said. “Because of the angle, they can see all the beautiful stage pictures.”

As an actor working onstage, however, she had to be cognizant of the effects.

She explained, “Cumulatively, for the skeletal structure it’s as though you’re working in really high heels all the time. The leg muscles and the IT bands tighten, and the knees can get pulled to the side. For me, this causes knee, leg and back pain.”

To combat these issues, Brescia took advantage of physical therapy sessions provided for the “Dear Evan Hansen” cast by its producers. She took additional steps to maintain her strength and alignment by scheduling regular massage and chiropractic treatments and by properly warming up for each performance.

“Our students can go see Lisa on Broadway and say, ‘I have the potential to do that if I put the work in.'” — Dr. Kurt Gerard Heinlein

And it helped that her character was costumed in “regular people clothes,” including medical scrubs.

She laughed remembering how this contrasted with a previous experience. “When I played Elphaba in ‘Wicked,’ I spent Act 2 performing in a 50-pound dress!”

When asked what people might find surprising about her experience in “Dear Evan Hansen,” Brescia described the contrast between the “pretty, glossy pictures” onstage and the constant motion occurring backstage.

“There were so many people involved in making what happened on stage look good and run smoothly: the stage managers, the company managers, the stage crew, the wardrobe crew, the hair crew, automation technicians, the spotlight operators, the house staff and box office personnel who serve patrons.”

And with such a large group collaborating to make the show happen, the backstage choreography was just as intricate as what was happening out front.

She recalled, “I knew exactly where I needed to be so I would not be in someone else’s way. At the same time, it’s really fun back there. We’re all pros, which means we’re focused, but certainly not glum.” 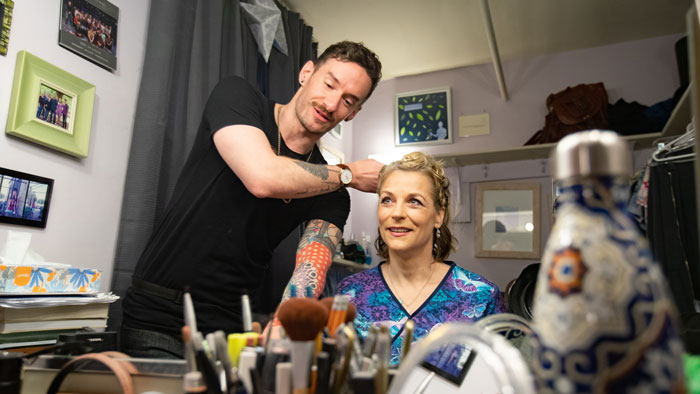 And the relationships, she said, grew very close. For example, “Most days, I spent more time with my dresser and hair person than I did with my husband. My dresser was with me as I changed clothes. It’s an intimate profession, and dressers must have sensitivity and intuition. When I walked off stage drenched in tears from an emotional scene, my dresser was there.”

Now, Brescia is happy to be back in the classroom with her students. She looks forward to what the future will bring — certainly more acting work and possibly some new paths as well, such as directing.

“I believe in sort of universal forces, like a warm hand on my back, pushing me through my fears and saying, ‘You are supposed to do this. Keep walking; just keep walking.’”

Look at her career highlights