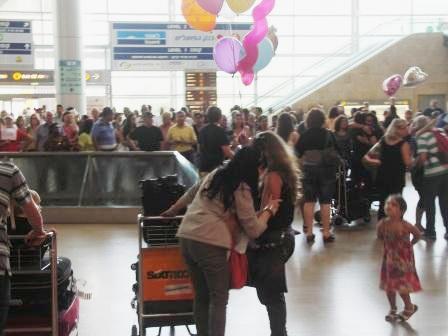 See all the friendly Israelis who came out to the airport just to welcome me.  Wow, what a country.  🙂

At 3:25 pm Thursday (Israeli time), the toothpaste tube, sometimes referred to as an airplane, squeezed me and all of my fellow passengers out into the receiving hall of the Ben Gurion Airport at Tel Aviv.  I can see through the large windows to my left that the weather is sunny and warm; of course, it is summertime in Israel.  So ends my flight to Israel, and my transformation from a boring college teacher in need of a hair cut into a boring supervisor of a few squares in an archaeological dig—and still in need of a hair cut (bad hair days have been a defining theme of my life).

How did this transformation begin?  Wednesday morning, about 4:20 am, with a night sky ruled by the crescent moon, my wife and I hauled my luggage into our Ford mini-van with temperamental doors, and made our way to Springfield’s gateway to the world—the Springfield-Branson Airport.  Once there, I met friendly agents who helped me tag my suitcase and bicycle for their eastward journey.  They were friendly because, as the first flight of the day, we were on time and no other flights had yet been cancelled.  Thus, they did not have to deal with irate passengers who had missed other flights and needed to have their vacation plans rerouted.  But in addition, the agents were happy and smiled as I paid $150 for my bicycle overage charges.

And with this auspicious start, the interruption that is an archaeological dig began for me.  Yes, it is an interruption to one’s life, but one that is both exciting and worthwhile, for it ultimately holds out the promise of discovery.  In past seasons, we have found an impressive four-room house—a typical domestic structure for ancient Israel.  This year, we will be digging through the remains of ancient Gezer left from the time of David and Solomon (10th century BCE), the early years of Israel’s modest but definitive history as an autonomous national entity.  Perhaps, if we are lucky, we may see the ruins of a palace from the centuries prior to David and the Hebrew people, the Late Bronze Age (1400-1200 BCE).  So, yes, the interruption is worthwhile and full of anticipation.  Still, at the time I am called upon to leave my wife and work here in Springfield behind, it is the interruption that fills my thoughts.

For the next few weeks, only the moon that has been placed to rule the night sky will be the common link to my Midwestern home.