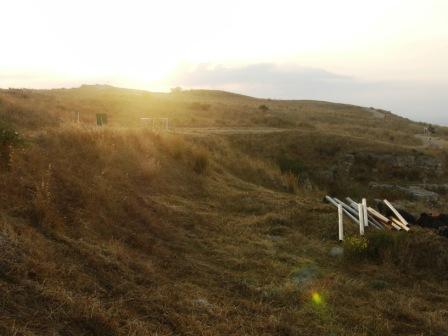 As we walked up the tel for the first time this summer, the morning dawn welcomed us.

The first few days of an excavation are filled with anticipation, unrealized expectations, promise, and the hope of touching history.  It is a time when my adrenaline runs on high, replacing the lack of sleep caused by jet lag with energy and activity.

First, one of the things that brings energy into the camp is the influx of the volunteers arriving from around the world, ready to get dirty.  For example, last night, one volunteer flew in from England, and since England is just an hour ahead of Israel, she was one of the few who got off the plane not looking blurry-eyed and beaten up, but instead, lively and awake.  Another one of our volunteers, who, though an American citizen, is Pakistani, had a nice, long visit with several Israeli security officers who wanted to get to know her better.  In the end, she was released and exited in good spirits.  But no matter who they were, all of the volunteers, once they had a shower and a night’s rest, appeared with all the energy that comes with a new adventure.  They really liven up the entire excavation, helping us all to think about what might be.

Next, our first visit to the tel (a “tel” is the name for an ancient, artificial mound, built by means of successive occupation) always adds to the excitement and anticipation of the excavation.  Today, Sunday, the staff went to the tel to unload the container, where all of our supplies had been stored for the last two years, and to see the squares in which we would be digging these next few weeks.  For me, this is when my mind starts to race and my imagination begins to dream about this season’s finds.  For here, I see the few 5 by 5 meter squares where I will be digging.  I have seen these squares before, in past seasons, and now I get to excavate deeper, traveling back in time, seeing more of what the ancient Gezerites have left for me to touch.

But, before I get to touch history, I had to prepare beginning top plans.  A top plan is simply a drawing of what was a square at the end of the day, and eventually, at the end of a season of digging.  Since we are resuming the excavations from previous seasons, our top plans mark the beginning point of our excavations this season.

And so, with these top plans drawn, our supplies organized, and the volunteers eager to get dirty, we begin, filled with the hope of touching history.