The spring 2015 #BearGrads ceremonies honored 2,416 graduating students on May 15 at JQH Arena.

To promote the event, Web and new media utilized a variety of communication strategies, including the development of a social media kit, live social media posts, and live streaming the ceremonies.

The #BearGrads social media kit contained a variety of tools that assisted university departments and individuals in sharing their commencement experiences. These items included:

These tweets received the two highest engagement rates of the day from the @MissouriState Twitter account. The #MSUMortarBoardMadness tweet checked in at 22.7 percent (874 engagements/3,854 impressions), while the shoes tweet nearly matched it at 22.6 percent (883/3,907).

The shoes that get these #BearGrads from Point A to Point B. pic.twitter.com/4IRAVTmk4a

However, Master’s degree recipient Mandy Dovin and her service dog, Sonja, won Facebook and possibly the internet on Friday. Sonja received a hood and had her name read at the 10 a.m. ceremony.

People love dogs. They also love good stories. This was the perfect storm. 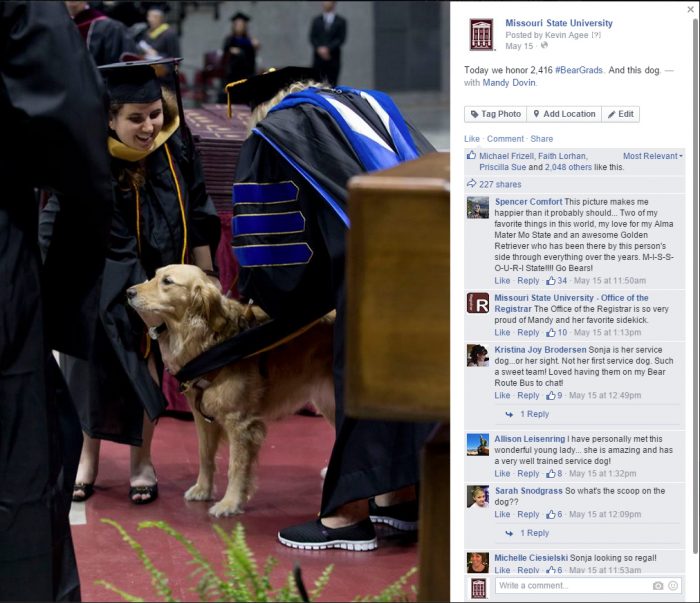 Mandy and Sonja also received the highest levels of engagement on Instagram, clocking in at 466 likes and two comments. The second-most successful of the day was this one, featuring a graduate proudly holding up her diploma cover.

A moment of pride for #BearGrads

People from across the campus community utilized the #BearGrads hashtag to share their commencement experiences on Tagboard. A few highlights of their posts:

I’m gonna miss this place but I’d say it was a good day!! #beargrads

Congrats again on finishing one chapter of your life – can’t wait to see what the next one holds! #BearGrads #BigWeekend #MSUBears