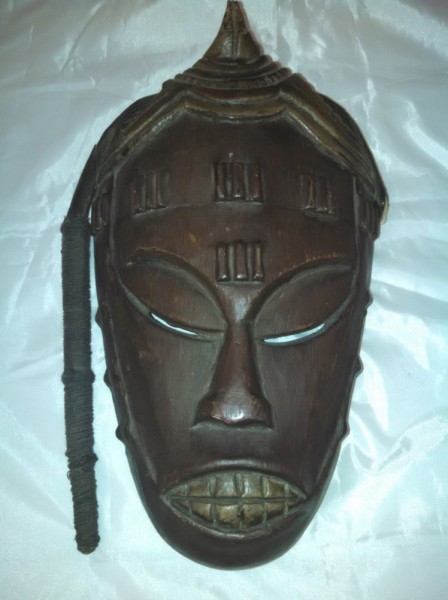 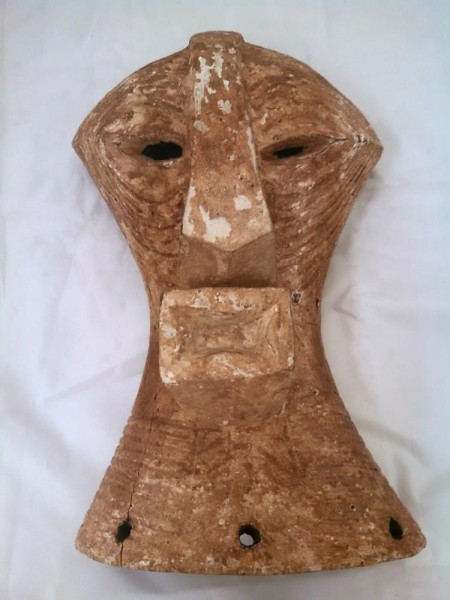 Traditional Punu culture Mukudj masks are worn in rituals to represent the ideal female and to represent deceased ancestors.  The masks usually have white or light-colored faces, full red lips, slit eyes, arched eyebrows, and three distinctive scarification marks consisting of nine raised bumps in a diamond shape that are placed low on the forehead and on each temple.  They also feature either an elaborate, single-crested hairstyle that resembles three large buns or an elaborate, double-crested hairstyle that resembles a pair of raised bird wings.

In contrast, while this mask has slit eyes, arched eyebrows, and raised scarification on the forehead and at the sides of the face, it also has bared teeth and thin lips, a single-crested hairstyle with a braid on each side rather than buns or wing shapes, and a dark complexion. Rather than rounded bumps forming a diamond shape, the scarification takes the form of three raised, vertical bars; in addition to the traditional placements, this scarification also appears in three additional groups across the top of the forehead and in three additional groups down each side of the face.  Finally, this mask is not hollowed out completely on the back, but instead is supplied with a hanging hook.  This Mukudj mask was therefore clearly made as an artform to appeal to tourists and to be a wall decoration rather than to serve as an actual, functional mask.

Traditional Kifwebe masks are made by Luba culture artists to represent supernatural beings such as ancestor spirits who visit their descendants:  The female mask represents a beautiful, fertile female ancestor, while the male mask represents a strong, virile male ancestor.  The masks have a round or hourglass shape, geometric features such as square or round mouths, oval or semi-circular hooded eyes, and fine, engraved, white-painted parallel lines that cover the rest of the face.  Black or red pigments also often highlight the features and sometimes are used to create contrasting areas among the white lines.  Male and female masks are readily distinguishable by the ridge running vertically down the forehead and adjoining the nose; the male mask’s ridge will be raised into tall, often pointed crest, while the female mask’s ridge will be flattened or even flush with the surface of the mask.

This Kifwebe mask has the traditional hourglass shape and the flattened crest of a female mask.  Only small areas of white pigment remains on the mask, which along with the many cracks and other signs of wear suggest that the mask was well-used.  While the mask is hollowed out on the back, the relatively small overall size suggests that this was not actually worn on the face in masquerades, but served instead as a miniature mask.  Such miniature Kifwebe masks were worn by pregnant women as status symbols in the Luba culture.