You are here: Home / Alumni Spotlight / Together they’ll change the world

Ethan Potter transferred to Missouri State during his senior year of college. In 2016, he earned his bachelor’s degree in psychology.

Now he and his mom, Jayma Potter, have master’s degrees in social work. 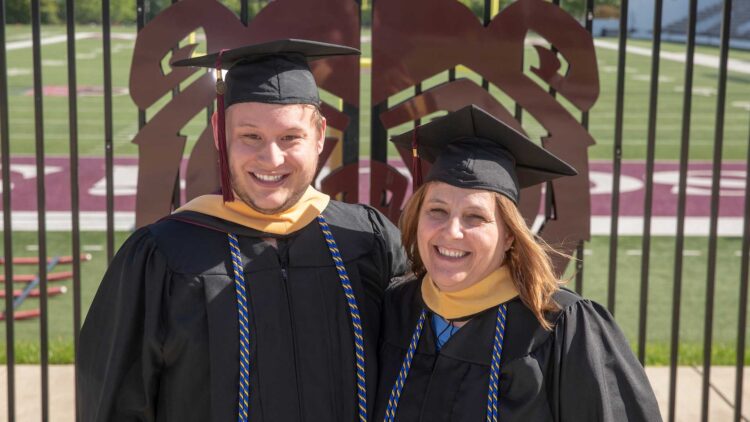 A rough start to a bright future

Both Ethan and Jayma got into their program because of life’s struggles.

High school, and particularly the last two years of high school, are usually filled with opportunities to explore who you are and what it is you want to do when you grow up. For Ethan, it was more about the help he got after losing his father, unexpectedly.

“Junior and senior year was a difficult time for me. When I graduated, I didn’t really know what I wanted to do. But, I knew I wanted to help people because of the tremendous outpouring of help and support I received after my dad’s death,” Ethan said.

At the same time his mom, Jayma, was working on her master’s in social work at Missouri State. But, she’d never been a traditional student.

“My children motivated me to get my degree. I became a parent at a young age and did not graduate from high school.”

She got her GED when Ethan was in 6th grade. Then, her bachelor’s. And now, her final goal: a master’s.

“The first time I ever heard about social workers was when my nephew had a heart transplant.” She says it was the social worker at that time, and then again when her grandmother was in hospice, who helped them through the process.

“There is something about helping someone in vulnerable conditions that hit home to me. Seeing my nephew and family struggle during these difficult times, find strength and support from an outside source, inspired me to be this person for someone else.” She said. 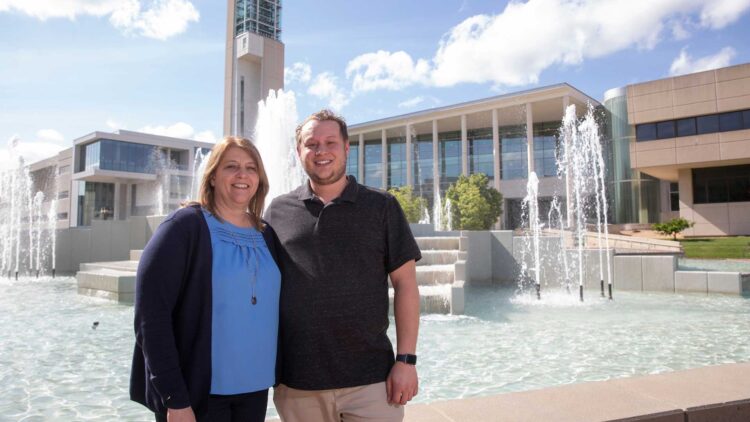 You can’t give up

Despite Ethan’s success in school, he still missed having his dad around to help him navigate life.

“As I was transferring to MSU, I began apartment hunting in Springfield, and I knew if my dad were alive, he would have helped me find a place to live.”

Ethan said struggling to find a place wasn’t the only time he felt lost.

“I experienced car trouble during college and had to buy a new car, the first one I would buy myself. I knew if my dad were alive, he would help me during that process. So, learning how to transition into young adulthood without my dad was really difficult for me.”

He felt lost at times. He thought about giving up.

“However, I knew my long-term goals would require a master’s degree which in turn requires a bachelor’s degree, so I had to finish.”

He said not having his dad at his undergraduate graduation stung, but he didn’t let that stop him from making sure his dad was involved.

“I have the only pair of dress shoes my dad owned, and I decided to wear them as I walked across the stage to get my diploma. I’ve only worn them during my graduation, they are getting old… but I’ll probably wear them during my (master’s) graduation.”

Jayma faced her own struggles earning her degrees. Especially after her husband died.

“My dad died while she was finishing her bachelor’s degree. She almost took a break to mourn the death of my father, but she knew she needed to push through and finish her degree so she could get a better-paying job because now she was the sole provider for me and her,” Ethan said.

His mom says it was tough being the non-traditional student, but her classmates and the program made her feel welcome.

“My advice to non-traditional students is to rely on your classmates. I have had three wonderful classmates these past four years that have helped me along my journey. Ethan was also a huge support to me over the past four years,” she said.

It’s not common for a mother and son to graduate together, let alone from the same program. It made the road to graduation that much better and challenging.

“Some people have said to me, ‘It must be pretty cool to be in a master’s program with your mom?!’ And for the most part, it was pretty cool. How many people can say they earned their (master’s) with their mom?”

Ethan says his mom started the program before him, so she would even save textbooks and give them to him.

“Don’t get me wrong, it was trying at times! I got a few frantic phone calls late at night because she couldn’t get her computer to work and she needed to submit an assignment soon.”

Being her IT guy wasn’t his favorite thing but…

“I know she is ALWAYS in my corner, cheering me on. I’m getting teary-eyed typing this because I’m not sure I can describe in words how important she is to me. She truly is the strongest women I know and has accomplished so many amazing things. I know this is cliché, but if she were a movie character, I think she would be ‘Superwoman’. In the face of adversity, she is so strong and has accomplished any goal she has set her mind to.”

Jayma says it’s an amazing honor to walk at graduation with her son.

“Graduating together is a proud mama moment. I am proud of his accomplishment, my accomplishment and the fact that we were able to do it together. He is an inspiration to me, and I hope that I am one to him.”

Ethan says transferring to Missouri State was the best decision.

“I have thoroughly enjoyed all my time here and I truly wish I had started here right out of high school instead of transferring my senior year. MSU was a great fit for me and I’m proud to be a Bear!” Ethan said.