What happens when two Bears who live a long way from Missouri State are paired, by chance, for charity?

They raise more than $100,000 and finish at the top of the competition.

A determination to honor their lost loved ones 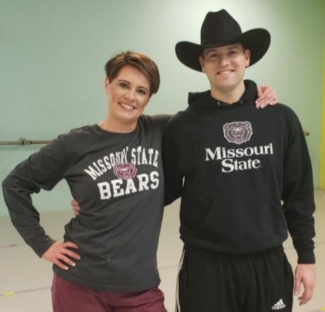 They both volunteered for the annual Dancing with our Stars event in Paducah, Kentucky. The event, held in February, is a fundraiser for the American Cancer Society.

They were randomly chosen to be dance partners.

Childers-Steckenrider, who earned her MSU bachelor’s in dance, has performed and taught for years. She is now the director of tourism for Metropolis, Illinois, which is near Paducah.

She has volunteered three times to be an instructor for the event because she has lost family members to cancer.

“This is my way to use my talent to benefit others and try to beat this awful disease.”

Straub, a former MSU golfer who is now an attorney, participated as a “Star” for the first time.

He lost his mother to a rare liver cancer.

“I danced in her honor and was determined to raise a figure that would make an impact in cancer research.”

“It was almost like a second full-time job during that time.”

His total, as of early March: $101,103. That surpasses all fundraising efforts by past participants in this event.

He was not only successful in fundraising. The team’s two-stepping, line-dancing performance to “Callin’ Baton Rouge” by Garth Brooks was the co-winner of the event. Straub and his mom loved Brooks, and had seen him in concert.

“We wanted to do something meaningful and tangible to memorialize my mom,” he said.

A connection between two Bear graduates

When Childers-Steckenrider found out Straub would be one of her dance partners, she looked him up on social media.

“That is where I found out he was an alum! I was shocked as we don’t have many Bears in western Kentucky/southern Illinois. When I went to meet him, I wore some BearWear so we bonded immediately.”

They became friends and connected over their experiences at MSU.

“It was fantastic! We not only were in it for the cause, but we felt like we were representing MSU as well,” Childers-Steckenrider said.

“It was a very special and destined partnership.”

Michelle S. Rose is the assistant director in the office of editorial and design services. Michelle is the managing editor of Missouri State magazine and writes many feature stories for the publication.