You are here: Home / Student Highlights / Carlyn Henson: Carrying on a generational heritage

Like many other students in her class, Carlyn Henson was tasked with designing a shirt for the Be A Bear T-shirt contest. Little did she know her design would become one of the three finalists.

“I saw my class, their T-shirt designs, and kind of felt like I was up there in my class. I felt confident with my class,” she said. “But with the rest of the contest, I wasn’t expecting to make it.”

The winner of the contest will have their design on the Be a Bear T-shirt and sold at the bookstore.

Folk style and the essence of Bears 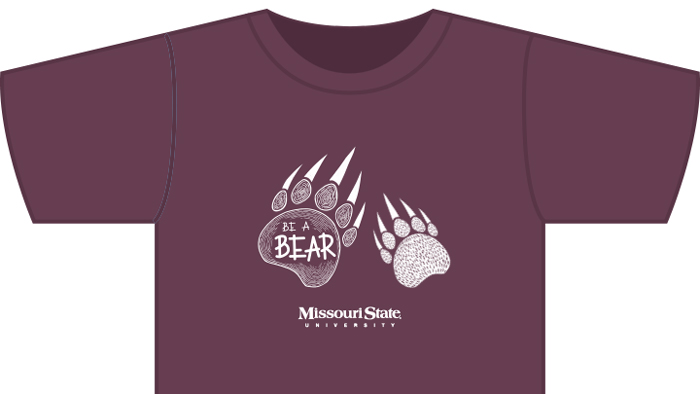 To Henson, being a Bear is about being friendly and inviting. Part of that involves being part of Missouri State University’s diverse community. She pulls from those reflections in her design.

“I wanted to make it friendly and inviting, so I made it very round and not scary,” Henson said.

The theme for Henson’s design is a folk art style that is simple and stylistic. She made her design about the outdoors and the woods, while also making a campfire style that is fun and simple, almost childish.

“I think that’s the way it should be when it comes to school T-shirts, friendly, simple and inviting,” she said.

Henson started out undeclared at Missouri State, but she quickly realized she wanted to study graphic design. In 2020, she added an illustration major with the hope of one day illustrating for children’s books. She does not have any specific plans for after graduation, but she wants to enjoy who she works with and what she is making.

Part of Henson’s inspiration comes from her family and friends. Her older sister inspired her to be creative, and a family friend began teaching her to use oil paints at eight or nine years old.

She is a fourth generation Bear.

“MSU is very closely tied into my family,” Henson said. “It’s like a generational thing for me too. It means a lot to my grandpa and my parents especially that I’m also a Bear.”

About the Be A Bear T-shirt contest

The Be a Bear T-Shirt contest is a way MSU students can engage with the university and help their fellow students. Each year, students submit their designs for consideration. A committee of professionals and students choose a winning design to sell in the bookstore.

Proceeds support the SAA Completion Scholarship, which offers scholarships to students in need of extra help, allowing them to complete their degree while here at Missouri State.

Carlyn’s design collected the most votes to win the 2021 contest. You can buy her shirt at the Missouri State Bookstore soon.