You are here: Home / Alumni Spotlight / Lawyer helps shape the future of MSU as a member of the Board of Governors

Gabriel “Gabe” Gore, ’91, a recent past chairman of Missouri State University’s Board of Governors, has spent much of his life advancing diversity, inclusion and education.

He benefited from excellent mentors — including some he found at Missouri State.

Teachers range from family, to MSU advisors, to Barack Obama

On campus, he found the late Alice Fleetwood Bartee, his pre-law advisor.

“Her mentorship was invaluable to me,” said Gore. As was “Coach Richard Clark, who taught me that you are not defined by the adversity you encounter, but how you respond to it.”

At the University of Chicago, he soaked up knowledge from his professor: future President Barack Obama.

But his earliest teacher was his mother, Juliet Gore. As a mother of six, Juliet never had the opportunity to go to college. However, she emphasized the importance and power of education.

Her children must have taken her words to heart. All six graduated from college. Two went on to become lawyers and another earned a doctorate.

“What are the odds of that? Of six kids raised in a rough Detroit neighborhood not only finishing high school, but all graduating from college?” said Gore. “I attribute a lot of our success to my mother’s strong will.”

Honoring his mother with a Missouri State scholarship

Gore and his wife Nicole recently established the Juliet E. Gore Scholarship, an endowed scholarship in honor of his mother.

The scholarship is for a full-time MSU student from St. Louis City or St. Louis County who is either first-generation or has financial need.

Gore started the scholarship to contribute to the Onward, Upward campaign, help support a future generation of students and create a legacy for his mother.

Juliet Gore passed away in August 2016.

“I think she’d be very honored,” he said.

Gore discovered his passion for law and the Constitution during a civics class in seventh grade. That class transformed him from a removed student to an engaged one.

His father worked for Chrysler, and the family moved to St. Louis when Gore was 14. He graduated from Parkway South High School.

Gore was introduced to Missouri State University in high school when the Bears played a game against the University of Pittsburgh, where his brother was a basketball player. The Bears beat Pittsburgh — not the outcome the Gore family was hoping for, but Gore nonetheless liked the vibe on campus.

“At that time, Missouri State was rapidly growing. A lot was going on,” Gore said.

On the first day of class, he declared his major as political science on a pre-law track. It was a successful decision: He was paired with a pre-law advisor immediately.

“That was a big part of my Missouri State experience, with Coach Clark and all my teammates. That was a really fun and great part of my experience. I was a varsity letterman for three years in track.”

After graduation in 1991 with a bachelor’s in political science and government, he attended the University of Chicago Law School. He earned his law degree in 1994. 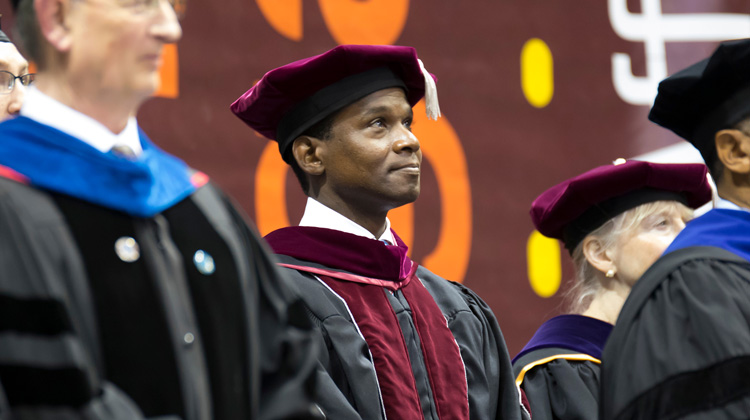 In 1995, Gore moved back to St. Louis and took a job as an assistant United States attorney for the Eastern District of Missouri. During that time, he was honored with the Federal Bureau of Investigation Director’s Award for Demonstrated Excellence in Prosecution.

From 1999 to 2000, Gore served as an assistant special counsel for the John C. Danforth Office of Special Counsel.

In 2014, then-Gov. Jay Nixon appointed him to serve on the Ferguson Commission. The commission made proposals to address racial injustice, economic unfairness and municipal court reform.

Today, he is a partner at Dowd Bennett LLP, a law firm in Clayton, Missouri. Gore has tried numerous jury trials to verdict, including cases involving breach of contract, securities fraud, employment and property damage claims.

Since 2017, he has been recognized by The Best Lawyers in America.

Advocating for diverse and marginalized populations

Outside of work, Gore has been a champion for increased diversity and opportunity for marginalized populations.

He was one of the founders of the KIPP School in St. Louis city. KIPP stands for the Knowledge Is Power Program.

It is a national network of free, open-enrollment, college-preparatory public schools dedicated to preparing students in underserved communities for success in college and in life.

Gore currently serves on the board of the school’s fundraising arm. His first accomplishment as a KIPP board member was being part of the team, which included corporate and community partners, that recruited KIPP to expand to St. Louis.

Gore also chairs Dowd Bennett’s Diversity Committee, which fosters the diversity and inclusion that has been part of the firm’s DNA since its founding. The diversity that Dowd Bennett has achieved has played a major role in the firm’s success. More than 40% of its partners are women and people of color.

As a member of MSU’s Board of Governors, Gore emphasizes the need for increased diversity among the staff, faculty and student body. He has helped MSU build relationships with St. Louis organizations that serve marginalized youth.

How he deepened his relationship with his alma mater

Gore enjoyed his Missouri State experience as a student athlete.

However, he was not especially active as an alumnus until he was encouraged by then-President Mike Nietzel and then-Board of Governors member Mike Dugan to engage with the university.

That has led to an experience that Gore now describes “as more meaningful to me than I ever imagined.”