You are here: Home / Alumni Spotlight / “Comedy is the most magical thing in the world:” Alumnus finding success in L.A.

Imagine this: You just had a role in a summer blockbuster. You’re living your dreams in Los Angeles. For alumnus Caleb Hearon, this is reality. Hearon, an actor, comedian and writer, recently had his big-screen debut as CIA agent Jeremy Bernier in “Jurassic World Dominion.”

This is the latest in a line of successes, including auditioning for “Saturday Night Live,” writing for television and movies, building recognition online for his “point of view” videos, doing standup for Comedy Central, being named to Variety’s 10 Comics to Watch and more.

Hearon came to Missouri State from Chillicothe, Missouri, with the intention of becoming a lawyer.

However, Hearon eventually decided he didn’t want to be a lawyer.

“I think when you’re a gay person from a small town, particularly, you feel like you’ve got to prove yourself,” he said. He realized he was pursuing pre-law to show people he could be successful, but it wasn’t his passion.
He eventually earned a bachelor’s degree in sociopolitical communication — a field he’s glad he studied.

“What I learned at Missouri State was how to work with people, how to make connections, how to get to know people and understand people’s motivations. The comm degree was a lot about understanding human behavior, and that’s a massive part of comedy.”

At MSU, Hearon befriended Caleb Doyle, ’16, a student with a passion for improv theatre, and Chance Nichols, ’17, who was making a name for himself in the Springfield comedy community.

Falling in love with improv and comedy in college

Doyle and Nichols started Missouri State Improv, a student organization adapted from an improv group called Grin and Bear It. The team drew audiences of 200 students each week to shows in Carrington Hall.

Hearon had always thought of himself as a funny person but was initially terrified of doing improv. In 2014, he attended a workshop and landed a spot on the team. They traveled to improv conferences at colleges across the Midwest to perform and learn from others. Hearon quickly fell in love with it.

Nichols, who served as the president of the organization, said he and Hearon bonded over the goal of putting on the best show possible. “We were always like, ‘We want this to be our lives.’”

During Hearon’s junior year, he and Doyle began producing a monthly show called “It Gets Worse.” The show was hosted in the living room of a two-bedroom apartment on Elm Street, which was shared by Hearon and his roommate Ricky Mehigh, ’16, a theatre major.

Described by Nichols as “a fire marshal’s worst nightmare,” the show was essentially students telling stories in front of about 90 friends.

“That was a very fun time when I didn’t know what agents or managers were — I didn’t know anything about the business,” Hearon said. “It was truly just college kids messing around and trying to make something interesting with their friends. And it was also some people who didn’t want to be comedians, who didn’t do improv or anything, getting up and sharing stories.”

This was Hearon’s first experience booking acts and producing a show.

“For a group of us it was very therapeutic, and we felt very special and cool to be a part of it while it lasted,” Hearon said. “I think it’s one of the things that made me think: I want to go to a big city and produce shows like this and try to make a career out of it because this is the most fun thing in the world.”

Hearon’s relationships in college were formative, but not just with his colleagues. Dr. Jeremy Neely, assistant professor of history, was a mentor.

“One of the things that impressed me was his willingness to put in the work to propel himself forward,” Neely said. “Caleb was obviously a talented guy, and he was funny, and he was engaging, and he got along well with people and had a really big heart. But what stood out is that he not only had the strengths, but he also wanted to succeed.”

Moving to Chicago, auditioning for “SNL” and becoming internet-famous

Three weeks after graduating, Hearon and his friends loaded up a U-Haul and moved to Chicago to join what he calls the best comedy scene in the country.

He told himself: “Comedy has to be your job in five years, or you’ve got to go do something else.”

Hearon got an internship at a theatre doing improv. He was also doing stand-up and creating solo characters. And then, “Saturday Night Live” came to town for a comedy-character showcase. Hearon made it all the way to Studio 8H in New York City, where he screen-tested for the show.

He performed for producer Lorne Michaels, writer and producer Steve Higgins, actors Michael Che and Colin Jost, among other producers and writers.

They liked him and invited him to the Ritz Carlton for drinks. Hearon didn’t get the job, but Higgins asked if he was creating online video content. At the time, Hearon didn’t have the following or online presence he now has. He started creating short videos.

He became “internet famous” after creating a POV (point of view) video during his lunch break while working as an administrative assistant at an ad agency. Overnight, he gained about 70,000 followers after model Chrissy Teigen shared his video.

“I didn’t really think I could blow up on the internet and get managers and agents. I just thought I would have to wait for them (“SNL”) to come back.”

Instead, Hearon started getting calls for other desirable writing jobs. His career took a different path than he’d expected, and mid-pandemic he moved to Los Angeles. 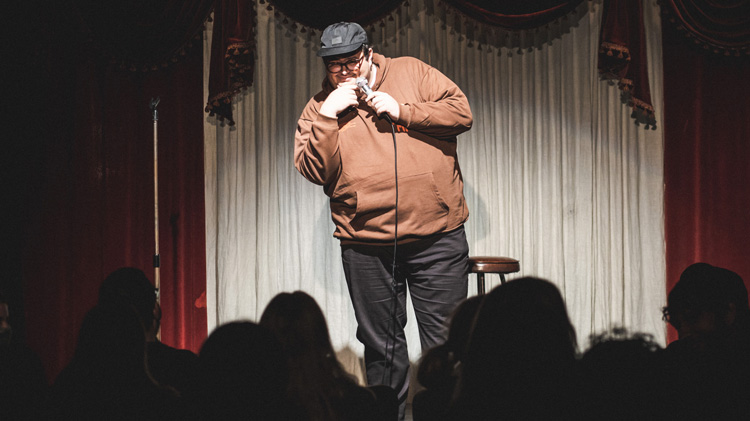 Hearon continues to create both characters and videos.

“I’m always working. At any given time, I’m either in somebody else’s writers’ room, or I’m on set acting, or I’m traveling or touring, or doing a show — and I have my own projects in development.”

Recently, his set for “Comedy Central Stand-Up” was released.

He is writing two shows and a movie of his own. He is also a staff writer on Netflix’s “Human Resources,” which stars voice talent including Maya Rudolph, Aidy Bryant, Rosie Perez, Keke Palmer and Nick Kroll, among other big names.

“Writing for animation is super fun because you can do anything,” he said. “A character can die in an episode and then be alive the next minute, because you said so.”

He was a nominee for the Breakthrough Social Star award at the 2022 MTV Movie & TV Awards. His acting credits include “Fargo,” “Crank Yankers” and “Work in Progress.”

Doyle, his college friend, said Hearon knows how to connect with people and form relationships. “He’s very good at making people feel special. I think that’s part of what led to his success early on.”

So, has fame changed him? Neely, who stays in contact with Hearon, says no.

“It’s cool to see someone succeed and to enjoy pretty dramatic, rapid success but remain the same person that you recognize from your time together,” Neely said. “He has maintained this very human sensibility about him. He’s just a genuinely kind person. He’s got the gift of relating to people, and I could see him going a long way.”

Hearon said he tries not to get too attached to any idea of what his future holds.

“One of the cool yet stressful things about this work is that you never know what your life is going to look like,” he said, but to him there’s no better job.

“Some days, I feel like comedy is the most magical thing in the world. To be able to make people laugh, or to make art in general is so important. … You hang out with the coolest, funniest people, whether they’re musicians or comedians or actors or whatever. You get to hang out with people you adore, and make stuff and put it out into the world. And if you’re lucky, people you don’t know will respond to it and say, ‘I really felt seen by this,’ or, ‘This really made me feel better about this thing I’m going through.’ … I think my philosophy on life is, if you hang out with good people, life is good. And so, I could do anything and really be happy.”