You are here: Home / Archives for Media Production 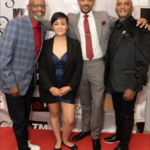 Jocelyn Millana, an assistant professor in the Media, Journalism and Film Department at Missouri State recently returned from a Red Carpet Premiere of Jacob, Broken by God – a film about a man finding God after his life spiraled out of control. Jocelyn, the film’s producer and director, describes the project as an “urban, faith-based film” and reveals that the film should be … END_OF_DOCUMENT_TOKEN_TO_BE_REPLACED 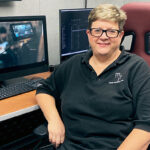 Dr. Deborah Larson seated at an editing bay in Strong Hall control room. Photo Credit: Conci Nelson, 2019 One year ago this past September, I met Dr. Deborah Larson practically in passing when she was in the throws of post-production for the Season 3 premiere of “Show-Me Chefs.” This was long before I ever imagined I would GoMaroon within the next calendar year by … END_OF_DOCUMENT_TOKEN_TO_BE_REPLACED 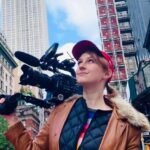 Alumna Emily Geraghty, ’12, stands behind the camera with vision, execution and zeal. Growing up in St. Louis, she spent hours behind the camera. Her interest in visual media grew as she studied media production at Missouri State. The rarity in a male-dominated industry, she creates and produces professional videos that focus on identity issues for women and marginalized … END_OF_DOCUMENT_TOKEN_TO_BE_REPLACED

Since its first season in 2015, Show-Me Chefs has entertained audiences with televised culinary showdowns between area chefs. It’s quickly become a local tradition — with an emphasis on local. Show-Me Chefs creator Deb Larson, associate professor in the department of media, journalism and film, shared, “It sort of came to me as we were developing the show that … END_OF_DOCUMENT_TOKEN_TO_BE_REPLACED

Lucie Amberg, a Missouri State new media specialist, per course faculty member and graduate student pursuing a Master of Science and Administrative Studies degree, recently wrote a successful grant application to the Missouri Humanities Council for an interdisciplinary, multimedia project on African-American history in the Ozarks. Stories that are waiting to be told This … END_OF_DOCUMENT_TOKEN_TO_BE_REPLACED