You are here: Home / Alumni Spotlight / A woman behind the camera

Alumna Emily Geraghty, ’12, stands behind the camera with vision, execution and zeal.

Growing up in St. Louis, she spent hours behind the camera. Her interest in visual media grew as she studied media production at Missouri State.

The rarity in a male-dominated industry, she creates and produces professional videos that focus on identity issues for women and marginalized groups. She has captured an audience of millions.

Pulling new narratives into the mainstream

Geraghty was always drawn to media and magazines aimed at women and girls. Early in her career, she noticed an absence of inclusive stories.

“I realized how many women’s narratives are out of mainstream media. I felt a pull to create what I didn’t see,” she said.

She landed her first post-graduation internship in New York City with Logo, Viacom’s LGBT channel. Later, she became a producer for Bustle. Then a senior producer for Conde Nast. There, she produced, directed and edited videos for women’s brands including Glamour, Allure, Teen Vogue and Iris.

Inspired to see change, she began making the inclusive content she wanted to see, including the size-inclusive sensation, “Women Sizes 0 to 28 in the Same Outfit.” This Glamour series boasts 1 million YouTube views per episode.

Her treasured project, “Pretty Big Movement” destroys dancer stereotypes by changing the narrative around what a dancer’s body should look like.

“As I gained more experience in the industry, it felt like I had a big megaphone. I am called to share it with other women who may feel left out, too,” she said.

From one mind to millions

Her work continues to amplify voices of underrepresented people and diversify mainstream media.

Geraghty is not just impacting the film industry, she is impacting the world one video at a time. She was inducted into the Missouri Public Affairs Hall of Fame on April 12. 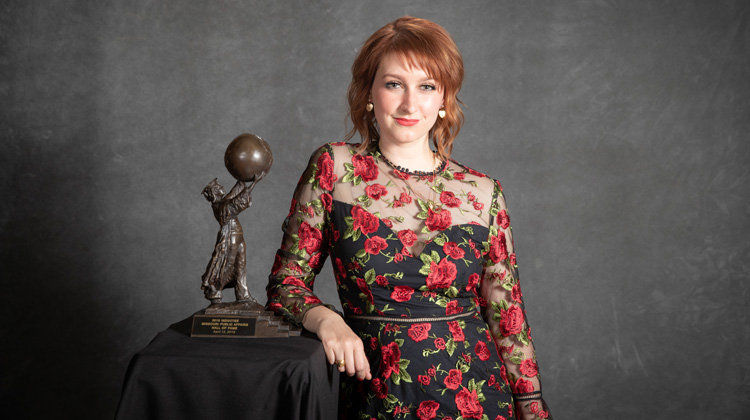 Finding her voice, smearing her lipstick

As an anomaly in the industry, there are several challenges. Others often question her competency and technical expertise; she has to fight for a professional space that is already hers.

She gives advice to other female media students.

“Speak up. Make mistakes and learn from them. Smear your lipstick, find your voice and take all that into each project. No one told me I could both wear red lipstick and operate a camera. It’s a good look, if you ask me.”

During her years at Missouri State, she was supported by many people.

“I had several inspirational and intelligent professors, including Dr. Deb Larson and Diana Botsford. They encouraged me to look at media in a different way and helped guide me to this path,” she explained.

Despite obstacles along the way, hard work made her a professional.

“You have to be ready for rejection and instead of letting it stop you, let your skin grow thicker and be open to the next opportunity,” she said. “Let working hard be your default.”

“Whether you want to move to a big city and make films, take photos or write — if you try your hardest, you can.”