What started out as a class project in Marketing 380, Creative Advertising, taught by Dr. Melissa Burnett, has quickly changed into a movement.  Students from both fall 2013 sections of this course were inspired by the stories of foster children when they learned that the average foster child packs his or her few belongings in trash bags every time a move is necessary.  The students’ goal is to raise $10,000 to donate to the Children’s Division in Laclede County and they have already held 18 fundraising events in the area.   The students also want  to show the children that their toys, tennis shoes, and favorite t-shirts are not trash, but rather treasures.

The complete story and video are available on KSPR 33 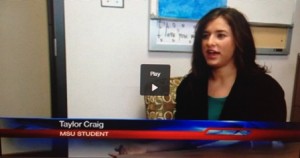 42 kids and counting. For over 16 years, Merry Anne Robinson and her family have opened their home to take in kids that don’t have one.

“I hear people say all the time; I don’t know how you give them back? I’ve always felt if you don’t get attached, if you don’t love them, you’re not doing your job,” she says.

Robinson is a product of the foster care system. This is one of the ways she gives back.

“We’ve had kids for as long as three years and other kids as little as two to three weeks,” says Robinson.

In Missouri alone, there’s over 10,000 children in foster care. In Laclede County, there are 142 children in the system.

“These foster children get moved an average of nine times and they’re told that day. They have to put all their belongings in a trash bag,” says student Taylor Craig.

Hearing stories like that had a major effect on Taylor and her fellow classmates. They got inspired to help foster children. For over a month, Craig and her classmates have gone door-to-door asking businesses for donations.

There’s a Facebook page showing what they’re up to. They’re also holding events in town. Their goal is to raise $10,000 dollars.

“We figure, why wouldn’t you want to aim high? The worst that can happen is we won’t meet it, but I think we will,” she says.

With guidance from their teacher, what started out as a class project has turned into a major movement.

“We want them to understand that their skills have absolutely no limit and that they can apply them towards anything they set their minds out to do,” says Dr. Melissa Burnett.

Just as the students were inspired, they’re hoping you’ll be too by attending one of the many events they’re hosting in Springfield.

For more information, check out their Facebook page at: https://www.facebook.com/pages/Project-Movement/256988227789796?ref=br_tf