COB was proud to be one of many co-sponsors for motivational speaker Amir Windom during African American Heritage Month on campus.  Amir Windom is a young executive at Atlantic Records and has won six Grammy Awards.  However, to hear him speak you would never know it.  Mr. Windom was humble and down to earth.

During his time on campus he met with a small, select number of students for a luncheon and informal question and answer session. He also spoke at a larger event, open to the public, in the Plaster Student Union Theater.  The tone of both events was similar.  Mr. Windom urged students not to be afraid to transcend cultures or meet people different from themselves.  He also encouraged students to “strive to be more than successful; be significant. Take advantage of opportunities to be great and be willing to struggle.”

When asked about career advice for future professionals, he recommended flexing purpose, not power and controlling ego.  He urges all to keep learning and listening, as there is always something more to learn or a skill that can be improved. 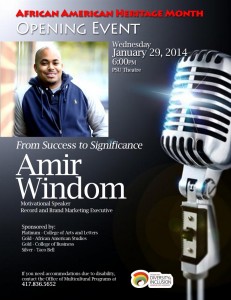 Before he accepted his current position, Mr. Windom worked as a music executive, TV/film music supervisor and marketing guru with Atlantic Records, Def Jam Records and Bad Boys Records.  He assisted in the development/management of careers of some of today’s biggest stars such as T.I., Lupe Fiasco, B.o.B, Estelle, Trey Songz, Young Jeezy, Bruno Mars and Kanye West.

He has been a featured speaker around the globe on numerous tours and at conferences, and colleges and universities, including United Negro College Fund, Empower Me Tour, University of Southern California, Your College in Toronto, Radio One Music Summit, Howard University, Steve Harvey’s Mentoring Summit and more.