Clarence E. McElroy has always loved being on MSU’s campus.

He has been near the university in some way since about 1953, when his parents moved to Springfield. He was in junior high then, and eventually went to Central High School.

He attended Greenwood Laboratory School during a few summers.

“By the time I was ready to choose a college, I was very familiar with what was then SMS.”

He majored in business, partly because his parents were entrepreneurs. They started Midwest Window & Door Corp. out of a garage in 1957.

McElroy arrived at MSU at a fortuitous time. His chosen area was full of professors who would become lifelong mentors. In addition, a student who went on to be one of our best-known graduates was on campus.

“David Glass (future CEO of Walmart Stores, Inc.) was the star of the business department at the time. I was a freshman when he was a senior.”

He loved learning and could often be found in the library.

“I was interested in what was going on in the world and wanted to gain as much knowledge as I could.” 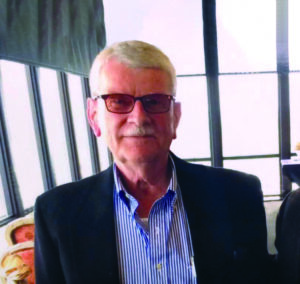 McElroy earned his bachelor’s degree in general business administration in 1963.

“I had planned to work for parents for a while to pay them back for college,” he said. Sadly, “right after I graduated, my father passed away suddenly of a heart attack.”

He put his Missouri State education and contacts to use.

“I had assistance when I needed it. In the years 1964, ’65, ’66, I would swing by and chat with some of my former business professors. There were several I had a close association with, and we maintained those relationships for years.”

The company grew enough that McElroy became his own success story.

“Later, some of the professors would come to visit me at my business.”

Now, he’s been CEO for many decades.

“We manufacture and distribute building products, several that are related to doors and windows.”

The once small startup now operates out of three buildings with 57,000 square feet of floor space.

“I laughingly say I am still in my part-time job, at 79 years old!” McElroy said. “Here I am, since June 1963. I work about 10 to 12 hours every day, except for Fridays. I think that keeps me young and active. I never let my mind get stagnant, or sit in one spot too long.”

“I am helping someone achieve their goals”

As his career grew, he began to think about giving back.

“In the early 1980s, when the Missouri State University Foundation was forming, I was approached by some of my business professors to attend the early meetings.”

College had been “such an enriching experience” for him that he wanted to give it to others.

“I thought this was a very good place to put a donation.”

He gave that first year.

“I pledged to myself that, if at all possible, I wanted to contribute something every year. I fortunately have been able to do that.”

He usually directs his gift to business — except for when he designated it to the restoration of the pipe organ in Ellis Hall.

“My nephew Garrett Lea just completed his master’s degree at MSU in music. He and his brother both attended Greenwood for a while. I used to pick him up sometimes from school, and I would be blasting Bach’s ‘Toccata and Fugue’ in my Corvette. I joke that could have led to him being interested in pipe organ — little did I know he’d later get a degree in it from MSU!”

One of his major gifts came a few years ago: The Clarence E. McElroy Endowed Scholarship. It is awarded to undergraduate students in the College of Business who have financial need. Preferences are given to graduates of Central High School, then graduates of Springfield high schools and first-generation students.

“At least two students have now earned it,” McElroy said.

The first year, he was able to have dinner with the recipient.

“I had a Zoom meeting with the recipient of it this year,” he said. “It was a great experience. She is a very talented and ambitious young lady looking at a degree in international law.”

Once, she wrote a letter to him about her appreciation for the award.

“I got that letter on a particularly frustrating day at work. I went home that evening and it was there,” he said.

“I opened it and read it and thought, this makes it all worth it. I am helping someone achieve their goals. It’s a breath of fresh air. It makes all you’ve done worthwhile.”

Enjoying the spirit of campus as a neighbor

It’s no surprise McElroy plans future support for Missouri State. After all, he’s a loyal neighbor.

“I have lived in the university neighborhood most of my life. My first home was on Grand Street. That was 1969. Then I moved to the north side of the university, and then I owned property across the street. I was even living in Sunvilla Tower when the university bought that in the 1970s. Now, I live in a condo nearby. I can look out the window and view the university any time of day or night.”

He likes the vitality of campus and the easy access to activities.

“Homecoming has always been one of my favorite things. I also enjoy football games in the fall and basketball in the winter.”

He keeps in touch with friends and classmates around the country.

“College was one of the most enjoyable times of my life.”

His reason for giving for 40 years is simple: “I want to continue to see the growth of Missouri State.”