Getting involved on campus at Missouri State is easy for most students, as opportunities to join clubs and organizations arise from the moment one steps foot on campus. Senior Logistics and Supply Chain Management major, Andrew Roberts, found his place within the Student Government Association, or SGA. 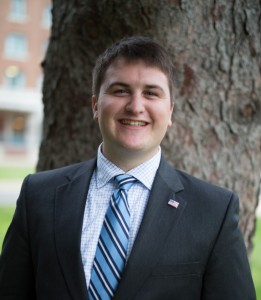 made on campus,” said Andrew. The Student Government Association was formed in 1921 as a representative body to the university. This year marks Andrew’s third year as a leader in SGA. “My first year in SGA I served on the Executive Board, as the Chief of Elections Commissioner. The following year I served as a Campaign Manager, and after a successful campaign I was selected to serve as Chief of Staff.” In that role, he is the chief advisor for the Student Body President and Vice President.

“SGA has given me a chance to manage a team, as well as work with fellow students and administrators to bring positive changes to Missouri State.” These are also skills he has further developed in his International Logistics class. “For the final project, we were paired up into teams where we did a statistical analysis for some US import data and presented our findings. It’s important to be able to work with assigned groups, big or small.”

Declaring a Logistics major was an easy choice for Andrew. “After learning about Missouri State’s program and the positive job forecast, I knew I wanted to pursue the degree. There is a growing job market where the demand for Logistics majors is greater than the supply,” he said.

An Omaha, Nebraska native, Andrew found himself at Omaha Steaks as a logistics intern in their distribution center. “I was able to take what I had been learning in my logistics classes and put it to use. The hands on experience also helped me understand concepts we were learning in upper level classes.”

Looking forward to graduating in May, Andrew said, “Even though I will no longer be a student, I hope to never stop learning.” He added, “You get out what you put in and the more involved you are in classes and on campus, the more you will learn.”