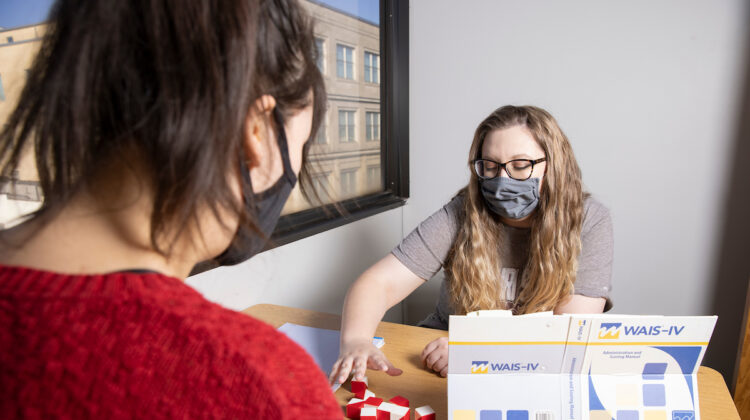 According to the National Center for Learning Disabilities, one in five people have a learning disability.

The dropout rate for students with learning disabilities is three times that of other students, making the need for resources crucial.

The clinic’s services are available to MSU students, staff, and adults and children from the community.

What is Project Success?

Alongside its testing services, LDC also has a program called Project Success for MSU students.

Project Success is designed for students who have been diagnosed with something that affects their education path.

“The intent of the program is to assist these students in fulfilling their goal of attending and completing college,” Program Director Steven Capps said. 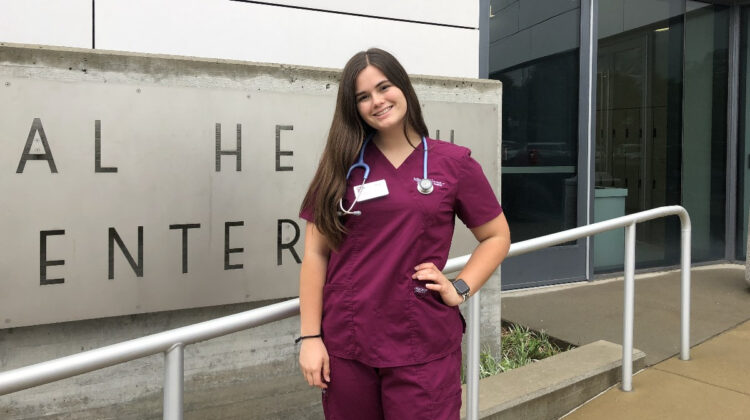 Her favorite course has been Fundamentals of Nursing.

“We really got to see a lot of hands-on things,” Rikki said. “We had a lab portion where we learned how to do things like start IVs and care for someone who needs assistance. It really prepared me for what’s coming up in clinicals.”

For Rikki, the best part of being a Bear is “being able to make different connections. The campus is big enough, yet small enough to still see people you know and recognize every day.”

After graduation, Rikki plans to work in the St. Louis area at a hospital. She hope to eventually become a travel nurse, helping people from location to location. 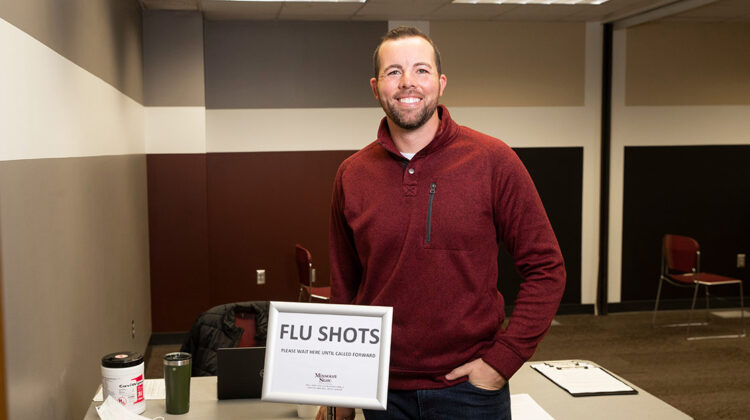 So, it was no surprise when he majored in exercise science, with a goal of moving into a physical therapy program.

While finishing his undergraduate degree at Evangel University, he did an internship at a physical therapy clinic. it turned into a part-time job for another year where he gained valuable hands-on experience.

But something bothered him.

“Many of the injuries were simply the result of having lived a long-term unhealthy lifestyle and could have been prevented through better nutrition and physical activity. Many of the patients I helped recover, came back a year later with the same or similar injury due to the continued unhealthy habits,” he said.

Hunt came to the realization that instead of healing people, he’d rather prevent injuries by helping them live a healthier lifestyle.

So, he began a Google search for the next phase of his career.

“I had never heard of it before, but I immediately knew that was where I needed to be,” the Bois D’Arc native said.

He enrolled in the program and particularly loved its management and coordination content which is applicable to wide array of careers.

“The program also did an excellent job of preparing me for the Certified Health Education Specialist (CHES) exam, which is a highly desirable certification that will set individuals apart from other job-seeking candidates,” he said.

While a student, he interned with Jon Mooney, who was then wellness coordinator at Jordan Valley Community Hospital (Mooney is currently the assistant director of the Springfield-Greene County Health Department).

During the internship, Mooney encouraged Hunt to join a local collaboration called the Childhood Obesity Action Group (COAG), which consisted of several area organizations. “Among the COAG organizations was a nonprofit called the Healthy Living Alliance (HLA). As I neared the end of my internship, HLA approached me and offered to create a part-time job for me. I took this position, which then turned into a full-time position before I even graduated,” he said.

“The internship offered through Health Promotion and Wellness Management program was a critical piece that directly led to a pre-graduation full-time position, which ended up being a steppingstone to the position I’m in today.”

Hunt graduated in 2013 with a master’s degree in health promotion and wellness management.

But his position was grant-funded. When grand funding was about to run out, Hunt accepted a position as public health program representative, tackling a variety of community health programs in the Springfield area.

A year later, the employee wellness coordinator position for the City of Springfield became vacant.

He landed that job and was there for three years.

“I gained a tremendous amount of experience in workplace wellness programming,” Hunt said.

Coming back to MSU

While he loved his job with the city, the wellness program coordinator position opened at MSU and caught his eye.

“My position manages and oversees all wellness programming for employees, spouses, dependents and retirees of the university. One of the things I love most about my position is that I get to be all over campus and interact with all employees, even at West Plains and Mountain Grove,” he said.

The wellness program provides support and encouragement to people to help them live a healthier lifestyle.

There are many aspects of wellbeing: physical, occupational, social, emotional, spiritual, intellectual, and environmental.

The job has been very fulfilling.

“I’ve had several individuals express to me how our programs have helped influence them to make positive modifications to their lifestyles, which in return has had life-changing results,” Hunt said. 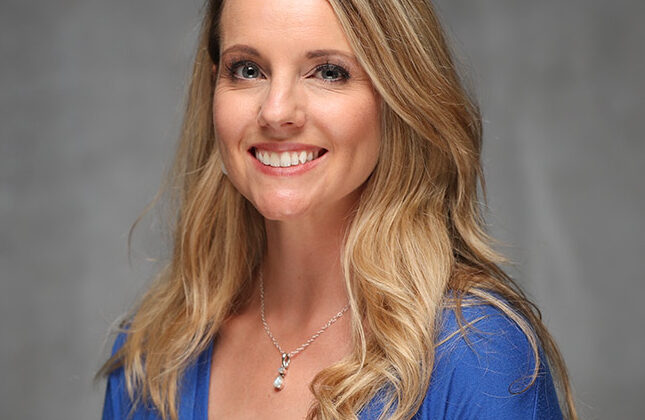 In March 2020, when it became clear that COVID-19 was impacting lives in the Ozarks, Jaime Gnau placed a call to Ozarks Food Harvest.Gnau is a dietitian at the MSU Care Clinic. In May 2020, she graduated with a master’s degree in health promotion and wellness management.

That degree gave her the organizational and leadership skills to launch a food box initiative at the clinic.

“I had a diabetic patient that came in and he was scared to go to the grocery store. He was scared to leave his house. We started doing phone visits to stay connected with him. He didn’t have enough food and it was impacting his blood sugar. I felt so helpless,” Gnau said.

Gnau transformed that feeling into action.

She contacted Ozark Food Harvest and asked if she could get nutritious food to hand out to food-insecure patients.

“I told them the contents I would like to have. Food that is low in sodium, balanced with fruits and vegetables, whole grains over refined grains. I told them how many we would need based on what I assumed would be the need. They stepped up to the plate,” she said.

“My degree in health promotion and wellness management has helped me as far as the academic side. There was a lot of focus on theory and research and that has helped me immensely. It’s a strong program.”

The need exceeded her expectations.

Between March 27 and September 9, staff at MSU Care Clinic parceled out 14,093 pounds of food to their patients.

The partnership is continuing.

“I am proud of our team. It’s been great. If you are hungry, it’s hard to do anything. I am glad we’ve been able to help with food insecurity. It’s a climbing problem with COVID,” she said.

Big hearted, but not yet a Bear

This is a second career for Gnau.

The Ozark native spent 13 years as a radiologic technologist, but she longed for more.

“I got into health care to help people. In that position I didn’t get that fulfillment. We were told to get people in and out as fast as we could. I couldn’t develop relationships with people,” she said.

So in 2013, Gnau decided to switch careers. She enrolled in Missouri State’s dietetics program.

“I love that Missouri State has the community focus. It resonated with me to be a Bear,” she said. “This is exactly where I want to be.”

She graduated in 2017 and completed her one-year internship in 2018.

Then she decided to pursue a master’s in health promotion and wellness management. The degree would expand her skillset and enhance her degree in dietetics.

“What I really enjoyed was it was flexible enough for me to work part time and take care of my family,” Gnau said. “The faculty were very helpful in helping me complete the process and supporting my goals. It fit really well within my experience as a dietitian. A lot of responsibilities of health educator align with nutrition.”

She landed a job before graduation — at Missouri State.

Gnau wears three hats: she’s a clinical instructor in the biomedical sciences department, a dietitian at the MSU Care Clinic, and clinical coordinator for the dietetic internship program.

“I love that I get to teach and remain in clinic,” Gnau said.  “It’s the best of both worlds.”

Earn a master’s degree in health promotion and wellness management