You are here: Home / Alumni Spotlight / A special collection for Missouri State

After rushing his pregnant wife Sara to the hospital at 7:30 in the morning, Pete Morgan completed his two-hour final in less than 30 minutes, giving him just enough time to experience the birth of his daughter.

He may have had a speedy finish to his university career, but the lessons he learned have lingered.

Pete Morgan, a Jasper County native, first attended Missouri State in 1950. He graduated in 1956 with a bachelor’s degree in business administration. He learned under some of the classic professors, such as Dr. Virginia Craig, Dr. Virgil Cheek and Dr. James Snapp.

“I REALLY HAD NO CONCEPT OF WHAT THE WORLD WAS ABOUT,” SAID MORGAN. “THEY TAUGHT ME IN A HURRY!”

After joining the Naval Reserves in November 1950, he left the university for Army Officer Candidate School in 1951. Pete Morgan returned to the university in 1954 after the end of the Korean War. He continued serving his country through the Army and Air Force reserves, accumulating a total of 21 years of military service.

Upon graduation, Pete Morgan worked in Chicago for three years and then accepted a regional sales position for the Maytag Company, covering the states of Missouri, Arkansas and Tennessee.

In 1967, he moved into the investment banking and securities business, where he remained until his retirement in 1980.

In 1980, Pete and Sara started a company that manufactured and distributed military insignia, the patches and medals that decorate a soldier’s uniform. The Morgans’ business was operated from their home in Arizona. They sold more than $1 million in volume per year within the first five years.

“OPERATING A VERY SUCCESSFUL BUSINESS WAS THE CULMINATION OF EVERYTHING I HAD LEARNED AT (Missouri State,)” SAID PETE MORGAN. “I WAS ABLE TO PUT EVERYTHING INTO PLAY BY STARTING WITH NOTHING.”

They picked up the hobby again in 1980, and had collected more than 11,000 pieces of military insignia from foreign countries, time periods and wars, and more than 12,000 pieces from the U.S. military before donating their collection.

“(This hobby and business) has given us an opportunity to travel around the world,” said Pete Morgan.

The Morgans’ donation to Missouri State

In September 2017, the Morgans donated their world-class collection of military insignias to the university. 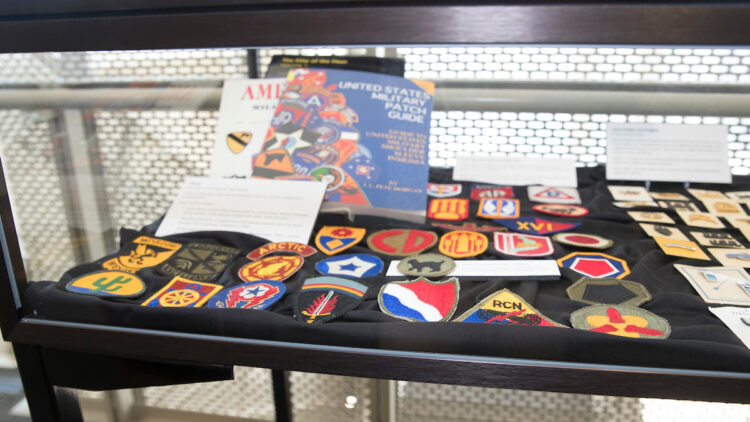 The Morgans built their insignia collection over several decades. It includes insignia, patches and medals from around the world.

Pete Morgan says he does not have a favorite piece — he just enjoys the history behind each.