You are here: Home / Alumni Spotlight / A point of Pride: “I see you”

The Midwest isn’t known for its inclusiveness or progressive ideas. For alumnus Andrew Shaughnessy, ’07, growing up here had a serious impact on his experiences.

“In the early 90’s it wasn’t the most welcoming environment for LGBT folks. Not only that, there weren’t any other LGBT folks in my hometown, but that I was the only one and I was holding that secret inside of me.”

He felt invisible. Like many LGBT people, he didn’t see himself in the television shows he watched, the movies he saw or even in his day-to-day life.

“I grew up in the ‘Will & Grace’ years and I have to admit, ‘I was like oh my God,’ there’s finally gay people. I remember seeing that. And I remember seeing ‘Queer as Folk’ coming out and just seeing these images for the first time.”

Shaughnessy finally saw more dynamic characters on TV, like the contrast between Will and Jack on the hit series “Will & Grace.” It’s one of the reasons Pride Month is so special to him. It’s a chance to be seen for who you really are.

He says it hasn’t always been this way.

A life of Pride

Pride Month isn’t the only time Shaughnessy advocates for the LGBT community. He spent his entire career fighting to implement stronger legislation and policies to protect LGBT people.

“I remember entering the health care system and being worried about how I would be treated as a gay person.”

He says there wasn’t a policy against discriminating based on sexual orientation, and that was terrifying.

“..in the most vulnerable time you can ever experience, when you’re walking in to get a medical procedure done. Because of my sexual orientation, I wasn’t thinking about the procedure and my well being. I thought, ‘God, I want to hold my partner’s hand,’ and what if someone says something to me? What if the nurse sees me? Will my care be different because of that?”

Shaughnessy says despite these experiences he’s seen a change, Springfield in particular. On April 7, 2015, voters repealed a Springfield City Ordinance adding LGBT people to the non-discrimination policy also known as SOGI. He was sitting at a bar when the final numbers came in, 51.4 percent to 48.6 percent.

“Whenever those numbers came in, I cried. I left and I cried because I was like OK I know everybody’s upset but this is amazing. I was so overwhelmed by how much Springfield had changed. Getting 49% of people to say yes, that sexual orientation and identity should be protected in Springfield, Missouri was beyond me,” Shaughnessy said.

A career in health care advocacy 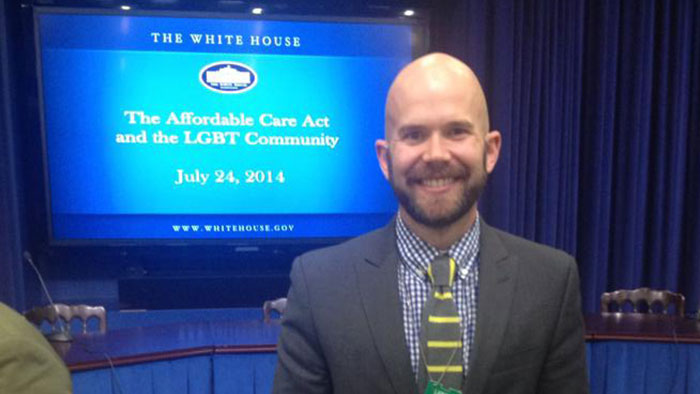 Currently, Shaughnessy is the policy officer for the Missouri Foundation of Health. He spends time advocating for better health care for the LGBT community.

“I felt a huge sense of duty to come back and use not only the skills and learning, but use my privilege for the betterment of those who do not have that. Because I recognize growing up in rural Missouri that I did live in a bubble of privilege in particular, in that I was a white male,” Shaughnessy said.

Prior to his work with the Missouri Foundation, he worked on several campaigns to end discrimination based on sexual orientation.

“It’s bigger than me”

The Alumni Association is recognizing Shaughnessy for his LGBT advocacy during the 2018 Bears of Distinction Awards Ceremony on June 23.

Shaughnessy was “flabbergasted” when he found out he was receiving the Bears of Excellence Award.

“I never would have thought that a university like Missouri State University would ever recognize somebody who’s LGBT, and I know that sounds really crazy,” he said. “But, I never really thought that we would get that far to be recognized. Just goes to show me how far we have come, in terms of our acceptance of LGBT people and our experiences.”

It’s his name on the award but Shaughnessy says it’s bigger than him.

“In that alumni newsletter, all the alumni now know that the university recognized someone who was an LGBT advocate. Who really worked in that space,” he said.

Nominate a fellow Bear for the 2019 Bears of Distinction Awards

Health care for all

The fight for equality isn’t over though. Despite recent Supreme Court rulings in favor of gay and lesbian couples, transgender people need to be included, he says.

“The next frontier is about allowing people to choose for themselves what they want to do with their body in terms of sex. We have a lot to do as a community to talk about, and not only that make available gender-affirming care coverage.”

“I see you. I see your struggle. I understand it. I empathize with it. Know that you are beautiful.”