You are here: Home / Headlines / Award of Appreciation: Jerry Hoover 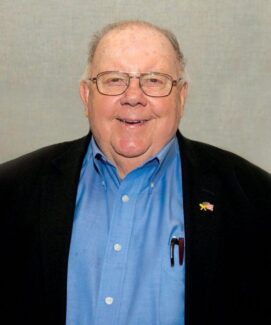 He served as the director of bands for 31 years until he retired in 2016. He directly oversaw the expansion of the band program as it grew into the respected program it is now. He supervised 18 separate student bands, personally directed the Pride Marching Band and oversaw growth in facilities.

He also brought national and international recognition to MSU. Hoover led performances around the world, including appearances in St. Paul’s Cathedral in London, the Macy’s Thanksgiving Parade in New York City, the Orange Bowl Parade in Miami and more.

What is your favorite memory from Missouri State University?

It scared the heck out of the British. They said, “An American marching band? Never, absolutely not.” But I’d been judging for the past few years, and I had some connections, so I got the invitation. We adjusted everything (in our performance) because we weren’t going to do what we normally do for a stadium. Those were very memorable moments.

I loved my 31 years at Missouri State. It’s unique to see it grow and to be a part of it.

What are some of your favorite accomplishments?

I taught for 58 years. I taught 20 years at the public-school level, and then I went to New Mexico State University. I really thought that was where I’d stay.

But I received several calls from then-Southwest Missouri State, and we ended up making that move.

It was a good move. Those 31 years were great. I loved the people I worked with, and of course the band staff. They were very special.

I think when you look at how far the bands reached and the opportunities those kids had, it’s pretty phenomenal. I don’t know of any bands that traveled all around the world and performed at the places we did.

What do you do in your leisure time?

A lot of artwork. When I was young and starting out, I thought I’d be an art major, but I loved music more. Since I’ve been retired, I’ve been fooling around with a children’s book idea called “Let’s Have a Band.” It’s about vegetables and fruits playing different instruments.

What is a message you would like to give to the MSU community?

Realize what a great university you’re a part of. I think especially the students probably have no idea how fortunate they are.

For anyone studying to be a band director or teacher, I told the students in my classes: You’re going to be remembered by your students. You don’t have any say about that. Now, how they remember you is going to be up to you. Are they going to remember you as a person who affected their lives and was special to them?

It’s been fascinating to hear back from different students from over the years.

It’s been a great profession. I don’t think I would change anything about it. Music is just a good connector between life and people.

Years of Service to Missouri State: 31