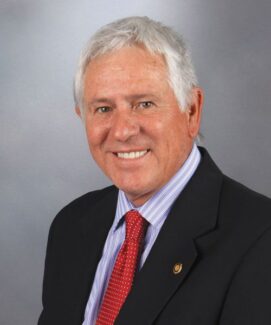 As a Bear, he played basketball, golf and won the intramural table tennis championship three years in a row.

Immediately after graduating from pharmacy school, he moved to Cassville, where he began to work in a local pharmacy. A short while later, he bought the pharmacy when the proprietor retired. He owned and operated Sater Pharmacy in Cassville from 1974-2004.

While there, he championed legislation for higher education and health care.

Due to his business background, he quickly became a leader on the budget committees and fought for these priorities to be funded each session.

How would you describe your career path?

Especially in a private pharmacy like I had, pharmacists play many roles. We act as counselor. We are marriage advisors. We do so much besides just talking about medication with our patients. You have to be a good listener and understand what your customers’ lives are about.

When I was elected to office, I didn’t go up to Jefferson City thinking that I was going to know it all. I knew that I needed to work with people and build their trust. More than anything, I thought I could bring a different perspective with my pharmaceutical background and my business background.

How do you think Missouri State helped you succeed?

Since my dad was a school superintendent and teacher and my mom was a teacher, I never questioned whether I was going to attend college. I considered it just another step in my life.

While I was at Missouri State, I earned a wonderful foundation in biology and chemistry, although at the time, I didn’t know exactly what profession I wanted to pursue. That education gave me the background to be able to choose from different paths at the graduate level and ultimately helped me to succeed with the pharmacy.

What stands out from your time in political office?

When I learned there was a desire to set up a partnership between UMKC and Missouri State to offer the pharmacy program in Springfield, I really wanted to see that come to fruition.

I served on the budget committee in the House and the Senate the majority of my time in office. In that position, I worked to get the seed money for this program into the state appropriations. It was especially gratifying to see the funding become part of the core budget so the program could succeed.

We had a news conference at Missouri State to announce the pharmacy program.

As then-Gov. Jay Nixon was preparing to make some remarks, he looked at me and said, “David, this is a big deal.” That really meant a lot to me.

What do you plan to do now that you are not in office?

I don’t consider myself retired. I’m looking for the right balance of activities and discerning where God would like me to be.

I currently serve as the chairman of the board for our local Barry County Disabled Fund, and that’s rewarding. I applied for election for the Barry County Health Department.

I’m always interested in the work of the pharmacy association and have also considered how I could get more involved at Missouri State.

Nicki Donnelson, ’02 and ’04, is assistant director of university communications and a contributing writer for Missouri State magazine.