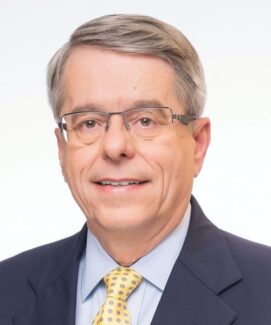 Gregory Curl — or Greg, as most people call him — first came to Missouri State to study political science and government.

So how did he end up as a top international banker? He built connections that allowed him to go from the Navy, to working with elected representatives, to becoming an expert in mergers and acquisitions. Now, he lives in Singapore with his wife, Sue Yang Curl. He plans to be near MSU again someday, when he moves to his family farm in southwest Missouri.

Why did you choose Missouri State?

I grew up in Nixa and graduated from Nixa High School. My father, Pete Curl, had gone to MSU, and it was the local institution of choice. My father played basketball at then-SMS for Andy McDonald, and went on to be the basketball coach at Nixa High. My younger brother, Bob, played for the Bears under Coach Bill Thomas in the late 1960s and early 1970s.

Did you play basketball?

No, no (laughing). That wouldn’t work out very well for anybody.

What are some of your favorite Missouri State memories?

My best memories surround the political science department. I enjoyed the classes and the professors, especially Dr. Denny Pilant, Stan Vining and Dr. David Heinlein. The curriculum was disciplined and rigorous. At Missouri State, I developed the core principles that still guide me today: the excitement of ideas, the dignity of all human beings, the importance of toleration and the power of clear and careful expression.

You started in politics but are now in banking. Are you in the career you thought you would be when you were at MSU?

Nope, nope, nope! In college, I worked for Congressman Durward Hall, the representative of the seventh district of Missouri.

Right after my master’s degree, I was a Naval officer in the Mediterranean and Middle East. While I was in the Navy, the chairman of The Union National Bank in Springfield, who knew me, reached out. They were in the process of selling to Boatmen’s Bancshares. He asked if I would be interested in going into banking. I had plans to finish a PhD in political theory and constitutional law, but he said, “Well, you should talk to the chairman in St. Louis.” I flew there toward the end of my Naval career and they convinced me to try it.

I thought I’d do it for a little while. I have now been in this field about 46 years! I had a short break when I worked for John Danforth the first two years he was in the U.S. Senate. I did constituency staff work for him in Springfield.

I went back to Boatmen’s at the end of 1978 and was with them until 1996. We sold to NationsBank in late 1996. I worked for NationsBank, which became Bank of America, from 1997 to 2010. I was vice chairman of corporate development and corporate mergers and acquisitions for all of that period, except at the end of 2009, when I was chief risk officer. I retired in March 2010.

I started at Temasek in September 2010. We have offices in Singapore, China, southeast Asia, India, Europe, Mexico City, Brazil and the United States.

How did you go from St. Louis to Singapore?

I had also lived in Charlotte, North Carolina, and New York at different points in my career.

While I was at Bank of America, I was the vice chairman in charge of acquiring companies. We acquired our first interest in a large Chinese bank in 2005. I spent a lot of time in Asia from then on and got to know the region quite well. I had met some people with Temasek. After I retired, they asked me to work there.

What does your job entail?

Temasek is a Singapore government entity. We have a portfolio of approximately $300 billion. We invest and manage that for the government of Singapore. We also manage strategic assets, such as the national airlines, the ports, the power systems, the telephone company, et cetera. I am excited by working with different cultures and helping people prosper through cooperation.

How do you think Missouri State helped you succeed?

The education was excellent. I was a Woodrow Wilson National Fellow in 1970, of which there were few. That, in large part, led to me pursuing my graduate degree.

I was also chief justice of MSU’s Campus Judicial Board. That was interesting preparation for conflict mediation.

What message would you give to the Missouri State community?

We live in a time of increasing challenges, and we will have to find cooperative ways to solve some of these problems. We need to be respectful of the dignity of all people. You don’t have to agree with people, but you certainly owe them civil and decent interaction.

Lives in: Singapore and the United States

Michelle S. Rose is the assistant director in the office of editorial and design services. Michelle is the managing editor of Missouri State magazine and writes many feature stories for the publication.