Pablo Tesouro, originally from Córdoba, Argentina, came to Missouri State to work on a Master of Business Administration with concentration in Marketing. While working as a Graduate Assistant in the Marketing Department, he was surprised to find his time in Springfield led to opportunities that further ignited his passion for baseball as well. 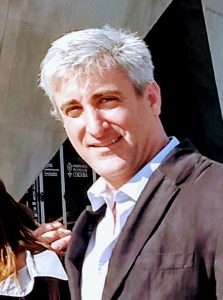 Before coming to Missouri State, Pablo earned an undergraduate degree in Clinical Biochemistry from the Universidad Nacional de Córdoba. After graduation, he immediately started working in the marketing department of a plasma products pharmaceutical company in his hometown of Córdoba.

In 2000, Pablo began searching for a place to pursue an MBA in the United States. He liked the Midwest because of its comparable cost of living to Argentina, and he was attracted to Missouri State based on the larger student population and the College of Business’ accreditation by The Association to Advance Collegiate Schools of Business (AACSB). After being offered a graduate assistantship in the Marketing Department, his decision was made.

While a student, Pablo held an internship in Dallas, Texas, with VHA Novation, the country’s largest group purchasing organization. He was also recognized as the David Glass Outstanding Graduate Student by the College of Business. In addition, Pablo was a member of Beta Gamma Sigma, an International Business Honor Society that recognizes top performing students from around the world with business schools accredited by the AACSB.

After completing his MBA, Pablo moved to Buenos Aires, where he lives today. He combined knowledge from his MBA and internshipexperience to launch his career in the international pharmaceutical industry. Immediately after returning to Argentina, he worked as the International Business Development Manager for Biosidus, a local biotech company. He later served as a project manager for Fresenius Medical Care, a $14 billion multinational company, and as the Director of International Business and Pipeline Development for a local oncology products generic company. He leveraged connections that he made while a student to jumpstart his career in the industry.

He describes how his marketing background has helped him in his career when it comes to business and organization. When giving advice to current marketing students, Pablo says, “Work really really HARD and stay focused on your dreams, no matter what is going on around you. It is not about being smart, it is about working hard and being a good person.”

But that’s not the only thing Pablo learned in the United States. While in Springfield, he learned about semi-pro baseball and organized baseball leagues. Baseball has always been a passion of his. He started playing as a young kid and immediately loved the sport, despite soccer being the most popular sport in Argentina with close to five million participants. The Argentine Football Association (AFA) began in 1893, the eighth oldest in the world, and is the pride of a country that has won more soccer titles than any Latin American country in history.

Baseball is a relatively small sport in Argentina compared to soccer, but Pablo believes it has a lot of potential for growth thanks to a recent immigration wave from other Latin American countries where baseball is more popular. Pablo says, “I envision opportunities in baseball development in Argentina in the years to come and think we could have the first Argentina born player in the Major League system within five to ten years from now.”

Pablo played for the Ozark Generals and the Springfield Slashers as a graduate student. While he enjoyed his experience on these teams, he would have given anything to play for the New York Yankees for a day. However, his baseball career didn’t end with the semi-pros. Pablo is co-founder of the Rumi Foundation, a nonprofit organization dedicated to the growth and development of amateur baseball in South America. Created in 2016, the foundation helps to positively change children’s lives through baseball, with many of them from poor neighborhoods in Buenos Aires. The Rumi Foundation supports baseball camps, clinics, and infrastructure projects in addition to offering support and athletic materials to players.

Pablo is also founder and general director of the Argentina Baseball League, the first semi-professional baseball league in Argentina. The Liga Argentina de Baseball is a winter baseball league in Argentina that played its first season in 2017. In 2019, the league will participate in the Latin American Series, a professional baseball tournament in South America that brings together the champions of Colombia, Nicaragua, Panama, Curaçao, and Mexico. This will be the first time Argentina participates in the Latin American Series, which will be held in Veracruz, Mexico, in January 2019.

“I believe that you can really help others and impact others’ lives through any activity you truly love and have passion about…whatever that might be. And for me, this is baseball. If I can help or positively change the life of one single kid, I will feel I have done something important in life,” says Pablo.

Outside of his passion for baseball, Pablo enjoys spending time with his wife, Ingrid Berger, an Argentinian citizen who also earned her master’s degree at Missouri State. They have three children: Iñaki, 13, Luciana, 11, and Francisco, 2. He enjoys traveling, which has been a part of large part of his career over the past 17 years. Pablo has been to more than 42 countries, and he enjoys visiting new places, tasting new foods, and getting to know new cultures. He also enjoys spending time outdoors, particularly at his farm in Córdoba—riding horses, firing old black powdered guns, and cooking barbecue “Argentina style.”