In 1993, Michael O’Keefe arrived at Missouri State, then-Southwest Missouri State University, unsure of which major path he would pursue. Twenty-three years later, he found himself preparing for a cross-country move that transplanted his Midwest family to Southern California in order to continue his career with the Los Angeles Rams. 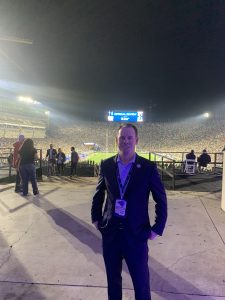 Originally from St. Louis, MO, Michael O’Keefe grew up in the Ballwin/Chesterfield area and remained there until 2016. Like many students, he had no idea where his Missouri State journey would take him. Michael was initially drawn to the university because of its diverse curriculum offerings, and he remained undeclared for his first year so he could explore the many available opportunities.

Michael’s academic advisor was a great help when it came time to choose a program, and he eventually declared himself as an Organizational Communication major with a Marketing minor. “I loved my communications classes and was especially interested in how it applied to groups and organizations. I was also passionate about marketing and advertising and was fascinated with learning about the relationship between consumers and products and how brands factored in. I knew I wanted some sort of mix within both of these disciplines,” Michael said.

Immediately after graduating from Missouri State, Michael took a summer internship selling season tickets and club seats for the Rams. He used the skills he had developed working part-time at an MCI call center his junior and senior year of college to excel at his internship. “I quickly found that many of the sales principles I learned selling long distance at MCI also applied to selling tickets, and I found immediate success as a result of the skills I had honed while in college,” Michael continues, “And yes, long distance was actually something you would buy back then on top of your local phone service.” Michael sold more tickets than any other intern that summer, which ultimately sparked his career with the Rams. 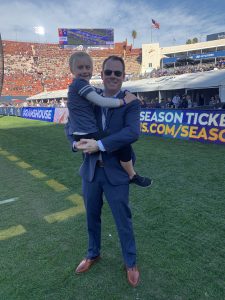 As his summer internship reached its end, Michael was unexpectedly offered full-time position selling tickets for the St. Louis Rams. He says, “In sports, ticket sales are one of the most common gateways to break into the industry and many times opens doors to other opportunities throughout the organization.”

Michael knew he wanted to stay in sales, and his role slowly evolved into selling club seats, suites and eventually sponsorship and media. He continued to move up the ranks and had the opportunity to oversee many different areas of the business, including ticket sales and sponsorship departments.

Michael says, “While I’m currently entering my 23rd NFL season, there haven’t been more than three consecutive years where I’ve held the exact same position and job responsibilities. I love the opportunity to reinvent and also help facilitate the development and advancement of others.”

In Michael’s current role as Vice President of Partnership Development, no two days are the same. However, one thing is for certain; he starts his day by reading the Sports Business Daily which he declares a “must-read” in the industry. A typical morning may consist of internal meetings and catching up on emails. In the afternoons, he sets meetings with potential clients and prospects. Lately, Michael has focused on determining how to incorporate companies’ community objectives with ways the Rams could help accomplish their goals or magnify their efforts. In any given week, Michael will spend a handful of evenings at events like Chamber of Commerce dinners, networking socials, charitable fundraisers, events the Rams are sponsoring or board meetings for his local YMCA. 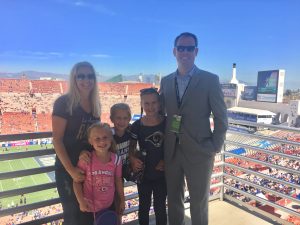 In 2016, the Rams relocated to Los Angeles and as a result, so did Michael’s job. However, he didn’t make the move alone. Michael is married to Missouri State graduate, Jennifer (Hall) O’Keefe, a former Sugar Bear who studied Architecture and Interior Design. They have three daughters, ages 7, 10 and 12. They currently reside in Agoura Hills, a suburb northwest of Los Angeles.

Within the sports industry, Michael has noticed an increased reliance on data when it comes to making business decisions. He describes how the relationship that companies have come to expect with sports teams continues to transform at a rapid pace. “While in the past sponsorships were viewed as feel good expenditures to incorporate brand exposure and promotional elements into sporting events, now the challenge is on the teams to demonstrate that a partnership will deliver a return on objective before the pen even nears the paper,” Michael says. He explains how any shortcomings in performance directly impact the team’s bottom line, which can wreak havoc on revenue expectations and the budgeting process.

Michael describes how his background in marketing gave him the fundamental building blocks to understanding consumer behavior, brand management and the alignment of sales. “I use a vast amount of the knowledge I gained in my marketing classes on a daily basis, especially when faced with challenging situations. Because the truth is that even as much as the world changes and the marketing industry as a whole continues to evolve, what remains constant are the basic principles you learn in courses like MKT 150 and MKT 350,” he says.

Michael remembers two instructors in particular, Dr. Linda Pettijohn and Dr. Charlie Pettijohn, and the profound impact they had on his education. “In fact, I chalk up the early success I experienced at the MCI call center as a direct result of applying the skills I learned in Charlie Pettijohn’s Personal Selling class—which was the most impactful course I had the privilege of experiencing at Missouri State,” says Michael, “There’s not a week that goes by where I’m not using pieces of that basic sales framework in some way, shape or form, or sharing it with others.”

Michael recommends that current marketing students view internships as opportunities and make the most out of them by soaking up as much knowledge as you can. He explains why one of his favorite quotes is, “Luck is when opportunity and preparation meet.” Michael explains, “In this quote, luck merely represents a chance you’ll receive—but what are you going to do with it? Be prepared. We’re all responsible for capitalizing on our own luck.”