Coming off of a win for their campaign for The McCain Institute in 2020, the Missouri State University Advertising Team has recently announced their plans for their next project. This semester, the Ad Team will develop a campaign addressing targeted violence and domestic terrorism for The Department of Homeland Security and The Office of Targeted Violence and Terrorism Prevention. The team will compete with 24 other universities in a competition hosted by EdVenture Partners to deliver an effective campaign that addresses their client’s needs, mitigates risk factors, and amplifies protective factors. The group will once again be advised by MSU alumna Samantha Francka who was a former member of the Ad Team during her education at Missouri State.

The Ad Team, led by member of the winning group from 2020 and current team president Jordan Galkowski, is excited to compete again and demonstrate their marketing knowledge and skills. “Winning this program last year motivates me to lead the team this year to another victory,” says Galkowski. “I’m confident that Ad Team is going to bring Missouri State University another first place award this year.” The competition will be more intense than last year with a total of 25 universities from across the country participating, including Columbia University, Johns Hopkins University, and University of Southern California. 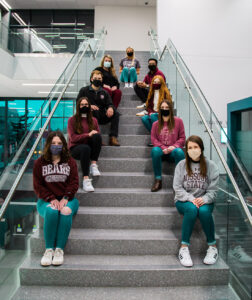 EdVenture Partner’s CEO Tony Sgro spoke highly of his experience with the MSU Ad Team. “I am always amazed by the creative, credible and authentic campaigns MSU Ad Team students have developed and implemented over our many semesters of working with them,” says Sgro. The growing problem of domestic terrorism gives members a chance to flex their creative muscles and develop new, innovative ideas that can help address these issues in meaningful ways.

The members of the 2021 Ad Team are as follows, along with their hometowns: