This Asian American and Pacific Islander post is to focus on AAPI excellence in the entertainment world. The AAPI community needs visibility, take the time to dive into some of these excellent artists’ work! This blog post features Books, Movies, and Music, but there is so much more to entertainment.

Love movies? Check out these 10 Movies by Asian American Directors, you can stream right now:

Like to read? These books by AAPI authors will reel you in:

If you’re a true book lover, check out these additional 30 book titles by Asian authors.

Into awesome music? Here are 9 Asian American and Pacific Islander Musicians you need to hear:

Want to hear more, check out these AAPI musicians who are dominating the alternative genre right now.

Appreciate a great Art Museum? Check out the best at the Smithsonian. Take a virtual tour of Asian American Artists and selected works.

Have children in your life and want to find ways to celebrate AAPI culture? Check out these 24 beautiful kids’ books that reflect the Asian American experience.

This blog post features Books, Movies, and Music, but there is so much more to entertainment.  If you want to learn more about pop culture and art, check out IU’s Asian Culture Center. Or check out how these 60 Asian American creatives are designing a better Los Angeles. Meet dozens of other podcasters, writers, photojournalists, filmmakers, and comic book creators, musicians. There are tons of ways in which to engage with AAPI entertainment to shine a spotlight on the excellence that comes from these artists.

As we celebrate Asian Pacific Islander Heritage Month, it’s important to look at how our society has gotten to where it’s at today.

The Chinese Exclusion Act was signed into law on May 6, 1882, and it suspended immigration of Chinese skilled and unskilled laborers for ten years and prevented Chinese immigrants from becoming United States citizens. The California Gold Rush and the building of railroads in the American west drew thousands of Chinese workers to the United States and many American citizens blamed those immigrants for low wages and lack of jobs. The Geary Act of 1892 extended the ban on Chinese immigration an additional ten years and required the immigrants to carry “certificates of residence.”

Chinese immigrants began to argue and fight for their rights. Lee Yick, a Chinese laundry worker, won a Supreme Court Case, Yick Wo v. Hopkins, on May 10, 1886. The case said that all people, citizens and non-citizens, had equal protection under the law. After being jailed for not paying a $10 laundry permit fine, Yick and another launderer, Wo Lee, sued stating that their constitutional rights had been violated because of the unfair and biased administration of the law requiring laundry permits. The court ruled that the Equal Protection Clause of the Fourteenth Amendment was violated.

From the 1960s and ‘70s the Asian American civil rights movement sought an end to the Vietnam War, for the development of university and college ethnic studies programs, and for monetary reparations for Japanese Americans forced to live in the World War II internment camps. The Asian American community began to recognize that they were also victims of institutional racism as were the Black American community. Proclamation 4417 was signed by President Gerald Ford in 1976. The proclamation declared internment camps a “national mistake.” The Civil Liberties Act of 1988, signed by President Ronald Reagan, apologized for the internment camps and provided $20,000 to surviving internees or their heirs.

COVID-19 has brought unfair targets to our Asian American residents. People are taking their frustrations and lack of education about the virus out on them, and Asian Americans are feeling a new level of harassment, violence, and hate. Stop AAPI Hate by reporting hate incidents.

“Stop Asian Hate!” Three words that sparked protests across America including MSU’s campus. Asian Americans communities struggle from violence and hate created by the racist rhetoric of the pandemic. Advocates are urging Americans to be allies, but in order to advocate we have to Knockout Our Ignorance. This requires us to learn about the historical cycle so that we do not repeat the same cycle. Hate crimes against Asian Americans have grown since the 2020 Pandemic. There is a report of 3,795 reported incidents of hate against Asian Americans and Pacific Islanders. AAPI leaders urge the importance of understanding the history Asian Americans in the United States. The community is not a monolith, they have diverse experiences of each community in America.

How can we help assist our AAPI community? Learn more about the resources below: 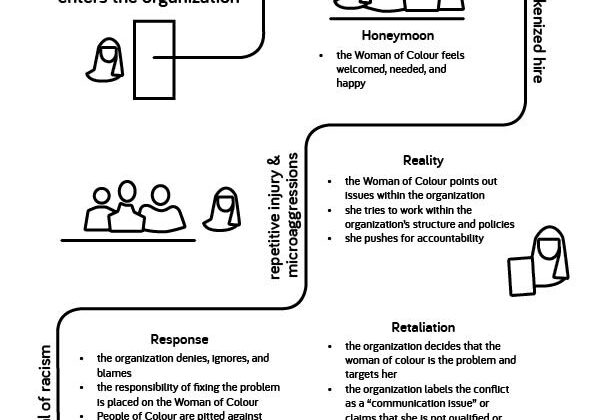 Despite making up about 20% of the U.S. population, in 2020 women of color represented only about 3% of the highest-ranking senior executive-level positions (also known as c-suite or chief-level roles) in corporate America.1 Factors such as microaggressions, double standards, and unconscious bias prevent women of color from advancing at work in ways that are different from white women and even men of color.

This framework can be seen in both big and small ways in work settings across employment sectors. Often, the experiences of women of color are misunderstood or mischaracterized, and unwelcoming racial environments fester even when these individuals address issues. Canadian-based Center for Community Organizations developed the following infographic to shed light on the impact of factors such as tokenization, repetitive injury and microaggressions, and denial of racism that perpetuates employment issues for women of color.4 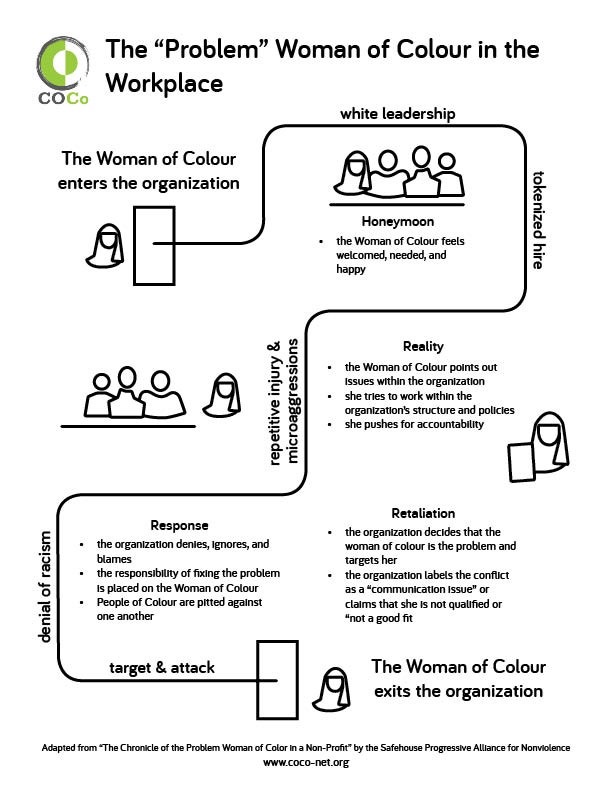 As ethical leaders, we all have a responsibility to be aware of inequities and to name and dismantle harmful practices that make our workplaces unwelcoming. While employment concerns are not limited to race and gender, consider how you demonstrate cultural competence in your workplace and how you create an environment welcoming to and supportive of women of color.

What is Asian Pacific American Heritage Month, and why do we celebrate in May?

In the mid-1970s, Jeanie Jew, a Chinese-American Capitol Hill staffer, first introduced the idea of designating a month out of every year to recognize the achievements and contributions of Asian-Americans and Pacific Islanders in the United States. Having witnessed the U.S. Bicentennial in 1976, Jew was frustrated that Asian-Pacific Americans’ roles in shaping America were not recognized during this important national celebration. Jew’s own great grandfather M.Y. Lee worked on the Transcontinental Railroad in the 1800s, which transformed travel, commerce, settlement, and the very concept of America. As a result of this lack of awareness and inclusion, Jew started a nation-wide campaign advocating for a celebration of Asian-Pacific Americans that ultimately led to Congress.

In 1977, U.S. Representatives Frank Horton (R-NY) and Norman Y. Mineta (D-CA) introduced a House resolution to set aside part of May in honor of Asian-Pacific American Heritage Week, and Senators Daniel K. Inouye (D-HI) and Spark Matsunaga (D-HI) introduced a similar bill in the Senate. Both bills were passed, and President Jimmy Carter signed a Joint Resolution to designate the annual celebration in 1978. Later, in 1990, President George H.W. Bush signed a bill passed by Congress to extend this into a month-long celebration, and 1992 marked the first official celebration of Asian Pacific American Heritage Month. These legislators chose May to commemorate two specific events:

Today, there are more than 20 million Asian-Americans and nearly 2 million individuals of Native Hawaiian and Other Pacific Islander ancestry living in the United States. Asian-Americans are the fastest growing population among all racial and ethnic groups in the United States. Throughout May, we take pause to reflect on the contributions that individuals of Asian descent have made to our culture and society, and to celebrate the ways in which our country is better for the inclusion of folks whose heritage stems from the 47 countries of Asia. Reflect this year on how you can follow in Jeanie Jew’s footsteps and use your voice to raise awareness and advocate for change to make your communities more inclusive.

Learn more about the origins of Asian Pacific Heritage Month and the events that inspired this national celebration: