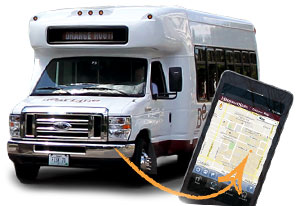 Several years ago, we helped pilot a program to provide near real-time tracking of shuttles in the campus shuttle system. That original system relied on BlackBerry phones in the shuttles to transmit GPS data. While the system was hugely popular, the phones did not handle the wear and tear of everyday use and had a lifespan of about six months. After the second set of devices began failing, we realized that the original system was not maintainable and so discontinued the service while we searched for a new solution.

The first step in the system was to find a different way to send GPS data from the shuttles. We quickly realized that our system requirements were anything but the industry norm:

After many hours of searching, Corbin Campbell in Electronic Support Services found a device which uses a private radio network to transmit updates every two seconds. While there was a moderate up-front cost in infrastructure, ongoing maintenance costs are extremely low. After a quick test to make sure that we could actually get reception over all of the shuttle routes, the system was purchased and installed in all of the Bearline shuttles.

Along with the shuttles, the campus map was refreshed to add even more support. New features include:

Check out the improved campus map!