You are here: Home / Archives for tim knapp 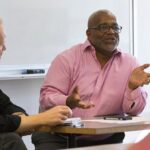 On April 14, 1906, racial tensions reached a tipping point in the Queen City of the Ozarks. Mob rule and violence ensued, and the lynching that occurred in Park Central Square on the eve of Easter Sunday became a permanent mark on the history of the Ozarks. In the aftermath of the catastrophe, many African-Americans fled Springfield and the surrounding area, leaving only a … END_OF_DOCUMENT_TOKEN_TO_BE_REPLACED 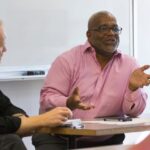 Lyle Foster Springfield is a friendly city with an ugly past. However, it’s more than the lynchings that took place on the square in 1906 that tarnish the reputation. To more fully understand the cultural climate that has been prevalent in the Ozarks for so long, three Missouri State faculty members have developed a living archive of testimonials and oral histories of the … END_OF_DOCUMENT_TOKEN_TO_BE_REPLACED

Lucie Amberg, a Missouri State new media specialist, per course faculty member and graduate student pursuing a Master of Science and Administrative Studies degree, recently wrote a successful grant application to the Missouri Humanities Council for an interdisciplinary, multimedia project on African-American history in the Ozarks. Stories that are waiting to be told This … END_OF_DOCUMENT_TOKEN_TO_BE_REPLACED