You are here: Home / Archives for dr. kurt gerard heinlein 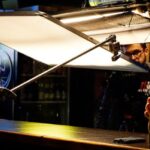 Filmmaking requires a team before and after the cameras roll. This is the story of a soon to be released film called “Break” that was produced by Richard and Lucie Amberg. Richard Amberg, coordinator of the screenwriting program at Missouri State University; Lucie Amberg, strategic communications specialist for the College of Arts and Letters at MSU; and Dr. Kurt Gerard … END_OF_DOCUMENT_TOKEN_TO_BE_REPLACED